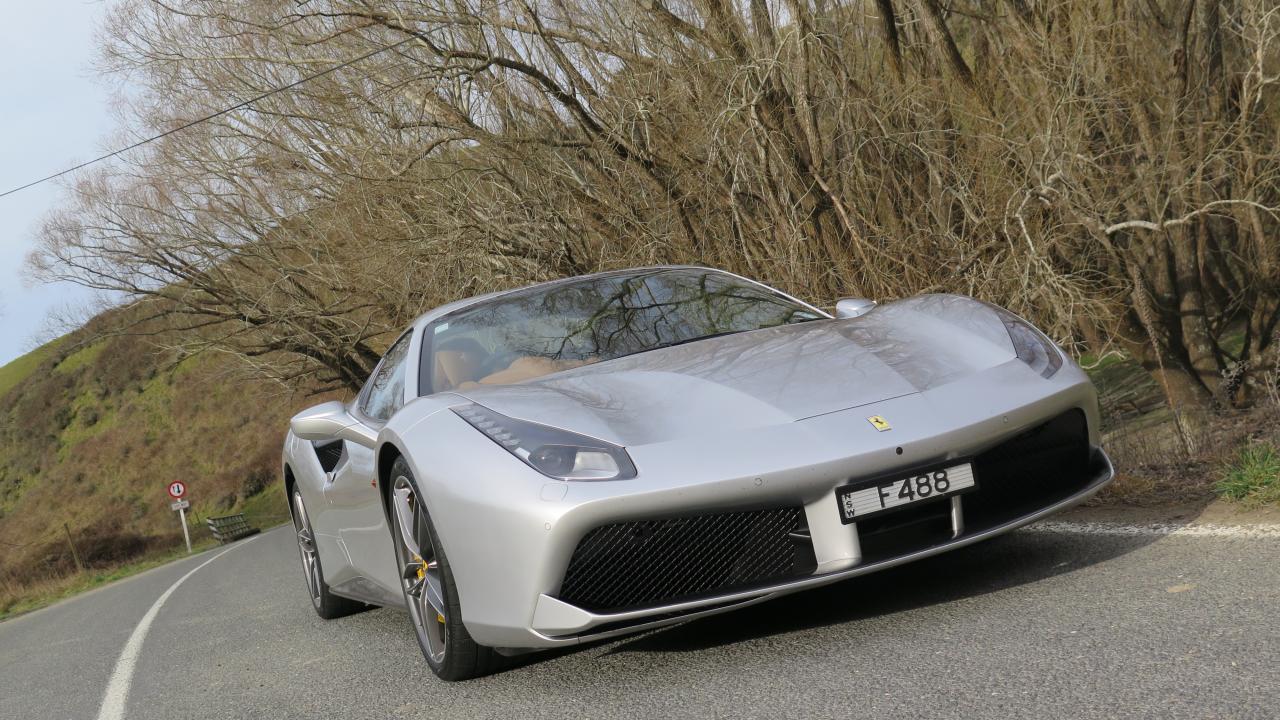 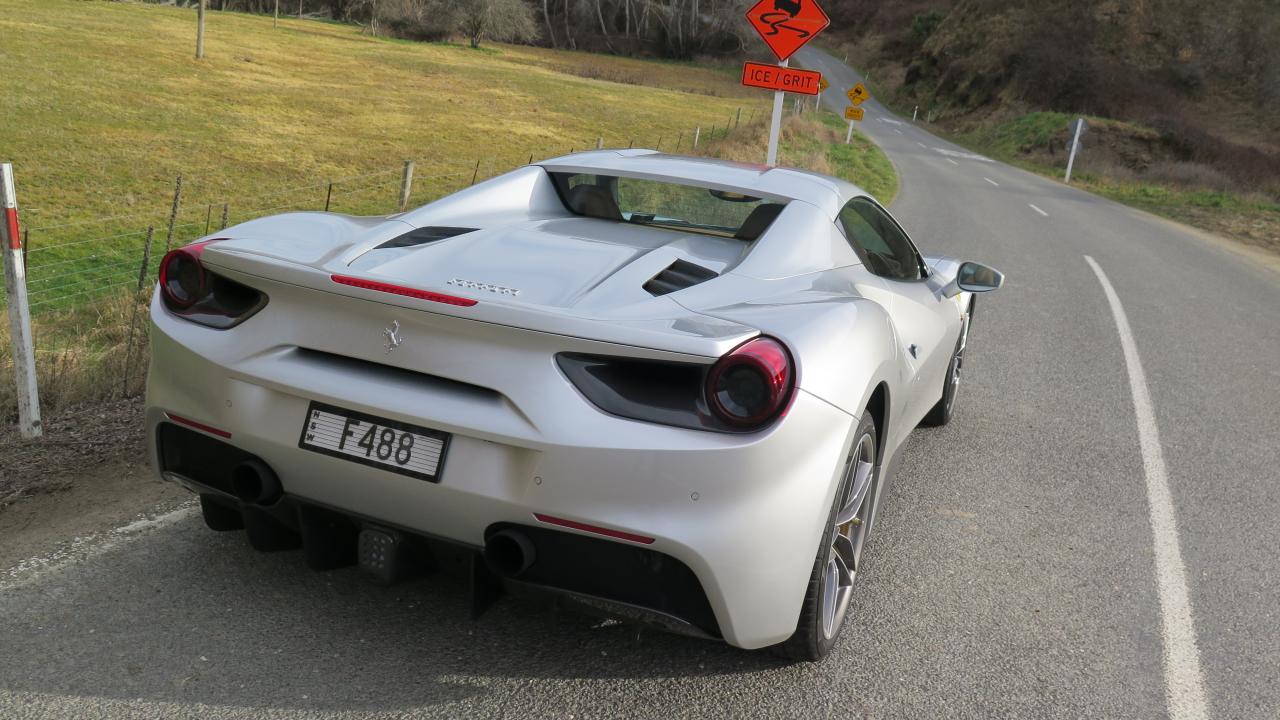 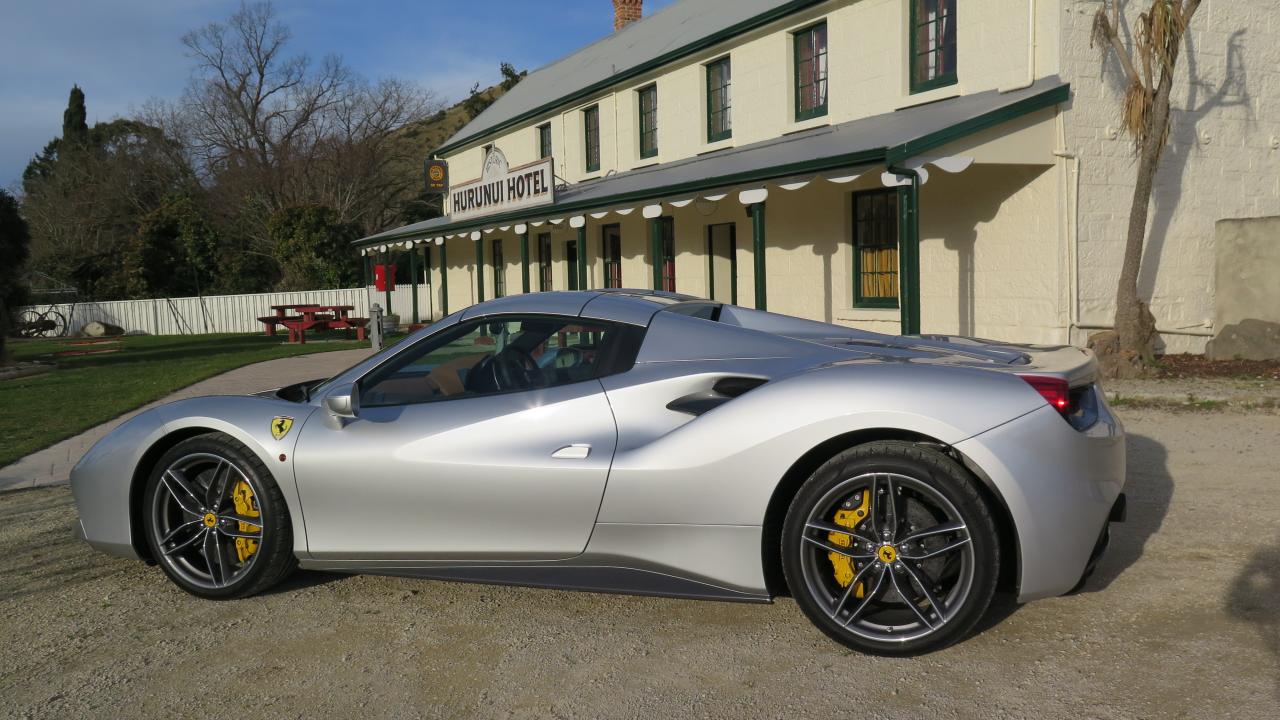 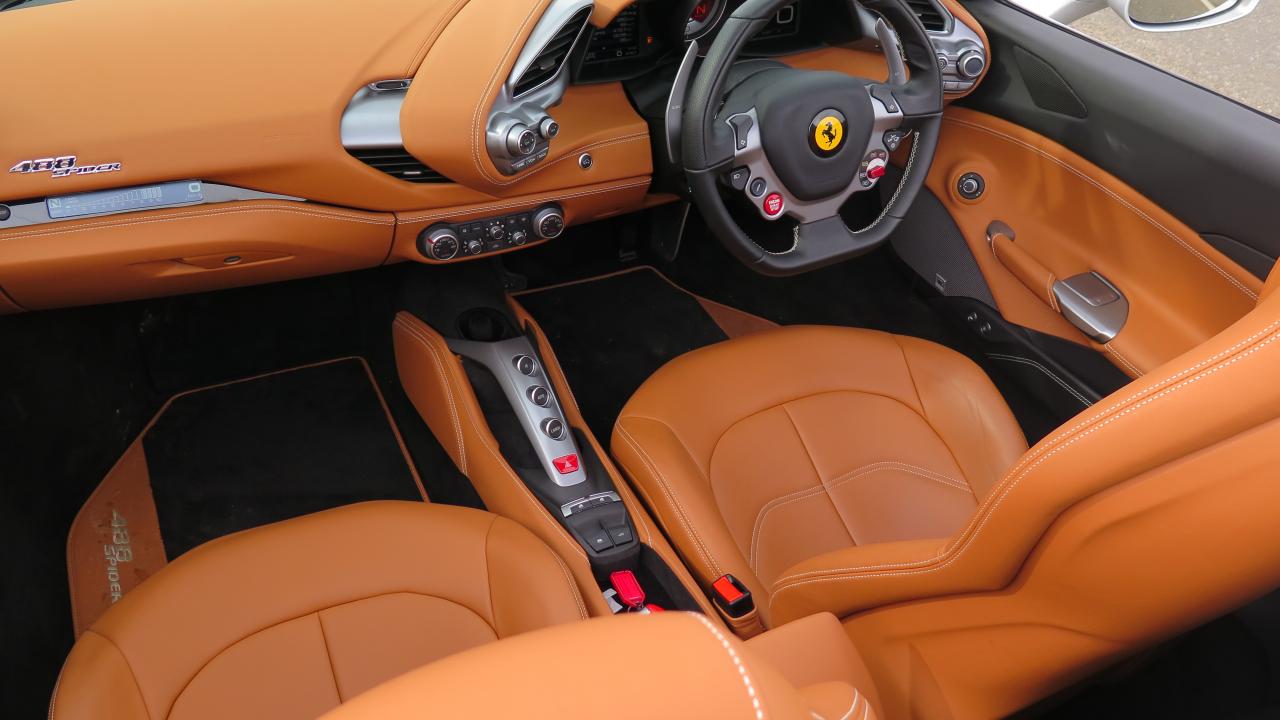 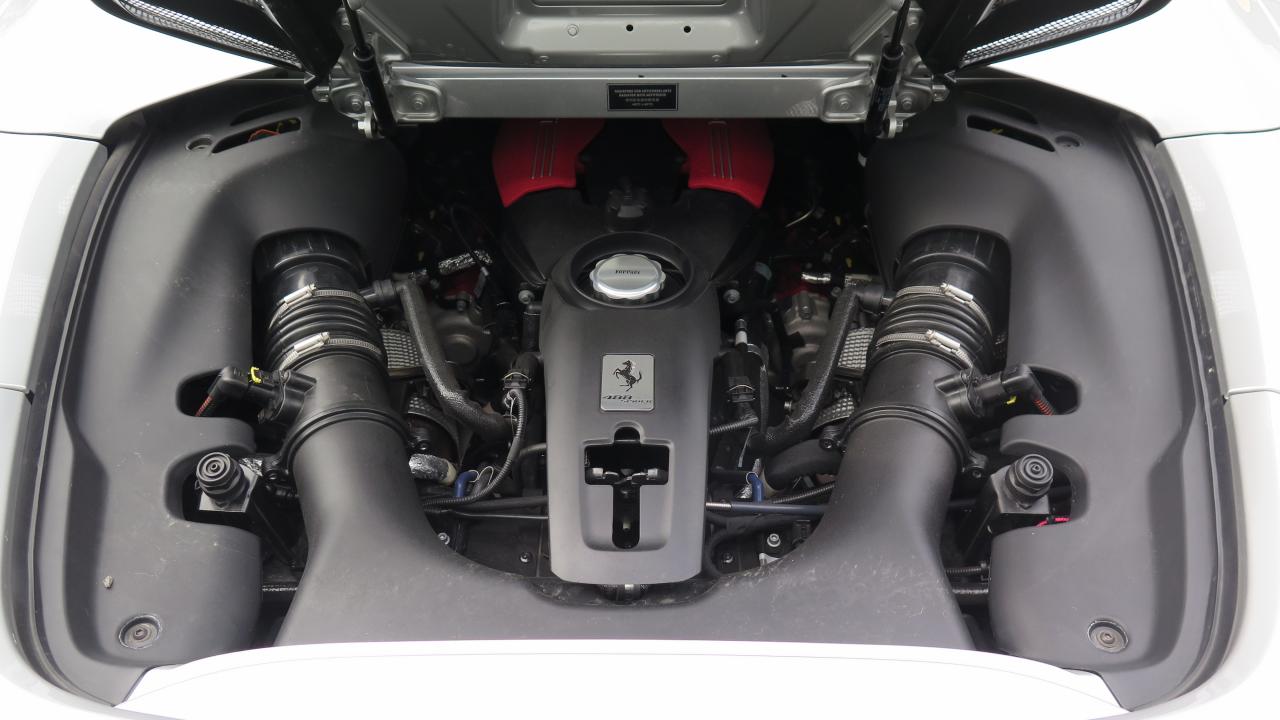 By golly is this Ferrari 488 Spider is a beautiful car, shown off by weak winter sunshine that seems to stroke those flowing lines, those streaming curves and wide haunches. The cabin is just as classy, enfolding its occupants with enough tan leather to cover a brace of lounge suites, the dash and controls curving around the driver like some sort of bespoke aircraft cockpit, albeit a fairly minimalist one.

It’s the steering wheel that’s not minimalist – fortunately a round of the block from the passenger seat delivered a quick tutorial into anything not obvious to the ordinary driver, like the fact the indicators are buttons on the front of the wheel, as are the headlight switch, the suspension adjustment, the start stop button, the wipers – and Ferrari’s Manettino dial, which lets you choose between Wet, Sport, Race, CT (traction control) off and ESC (stability control) off...

Back at the dealer, thankfully out of sight of the open-day crowd, the bags were loaded into the surprisingly spacious ‘boot’ up front, and we were off, into the Christchurch weekend traffic.

One of the most notable effects of car development – and particularly auto transmissions – has been how tractable such thoroughbreds can become. It’s not hard to pilot one of these cars through the inevitable roadworks, the unfamiliar junctions of a strange town, and even vision out is reasonable enough.

As for heading north on H1, there was none of the harsh ride expected from a performance car thanks to the magnetorheological damping system, and with the drive mode in sport and the gearbox in auto, it was certainly easy to tool along without the car straining at the leash.

Fortunately we’d planned a route through a number of north Canterbury’s more attractive minor passes and valleys heading west, where the roads were quiet, and enough of the turns sufficiently tight to challenge most cars at well under the legal limit.

Having dialled it to ‘Race’ and changed down via the steering wheel–mounted paddles, the mighty motor behind us instantly morphed into the pumping heart of a rocket-fuelled dragon, bellowing a grin-inducing battle song as it hurled great lumps of grunt to the road from middling revs onwards, so almost whichever gear we selected catapulted us forward with astonishing ease. That’s partly because the 492kW power peak hits at around 6000rpm and stays on song to the 8000rpm redline, so acceleration ramps gloriously up through an ascending scale of gears without apparently pausing for breath, though in the real world you’re more likely to appreciate that 760Nm of torque at 3000rpm...

Fortunately the 488 corners and stops as effortlessly, assisted by a hint of rear steer – the weight bias is 58.5 per cent to the rear – the trouble largely being that unless you pick your road with care, you’ll be so absorbed by the drama, by the pleasure of controlling such an engaging beast, that you’re likely to stray into antisocial speeds without ever a hint that you’re playing with fire.

It’s equally effortless with the roof down, to better appreciate the soundtrack. Sure, the wind riffled our hair, or would have done without the hat worn as a nod to the season, but otherwise wind flow is so controlled that you’re nearly as warm and comfy as with the roof up, the process of rising and lowering it a tad slower than expected, but at least you can hit the button to unfold or neatly stow it at speeds of up to 50kph.

It seems that the pricier the car, the more options boxes there are, and this 488 is no exception. As standard you’ll fork out $499,888, but items like the suspension lifter for awkward driveway approaches ($8500), the absolutely vital in the real world front and rear parking sensors ($9500) and cameras ($6500), the passenger display that’ll show your spouse exactly how fast you’re going ($7021) plus that luscious exterior carbon fibre pack ($46,800) are all cost options, and the long list of other options boxes ticked brought the total to an eye-watering $642,426.

If you come from a used-Corolla background that’d be hard to justify. Heck, that’s more than Wellington’s average house price. But if you’re lucky enough to drive a 488 Spider, you’ll see why folk are prepared to shell out that amount.

Previous post
Next post
Is towing under threat with Electric Vehicles?
Read more
Turning over a new Leaf
Read more

Mazda plants over 100,000 native trees with Trees That Count

The AA was pleased to learn Mazda’s positive environmental impact in collaboration with Trees That Count has...

2021 was a big year for new passenger and commercial vehicles, in fact the year had the...

If you have decided to get into the rideshare game it’s important to choose your vehicle...