What is ABS and ESC and how do they protect me?

Ever since electronics have been added to motor vehicles in order to improve their safety, one of the first safety systems to receive the benefits (starting in the late 60s) were vehicle braking systems. With the application of valves, solenoids, and speed sensors to a hydraulic braking system, it was then given a brain that could control the amount of braking force and which brakes are activated. This function created what is now known as the Anti-lock Braking System commonly referred to as ABS and the more recent evolution, Electronic Stability Control or ESC.

ABS is a safety system used on vehicles and operates by preventing the wheels from locking up during hard braking, thereby maintaining tractive contact with the road surface and allowing the driver to maintain more control over the vehicle, and can reduce the stopping distance.

ABS is an automated system that uses the principles of threshold braking (the optimal amount of braking force is developed at the point when the wheel just begins to slip) and cadence braking (pumping the brake pedal), techniques which were once practiced by racing/skilful drivers before ABS was widespread.

ABS operates at a much faster rate and more effectively than most drivers could manage. Basically the system would pulse the brakes (up to 15 times a second) in order to prevent wheel lock-up and uncontrolled skidding of the tyres. 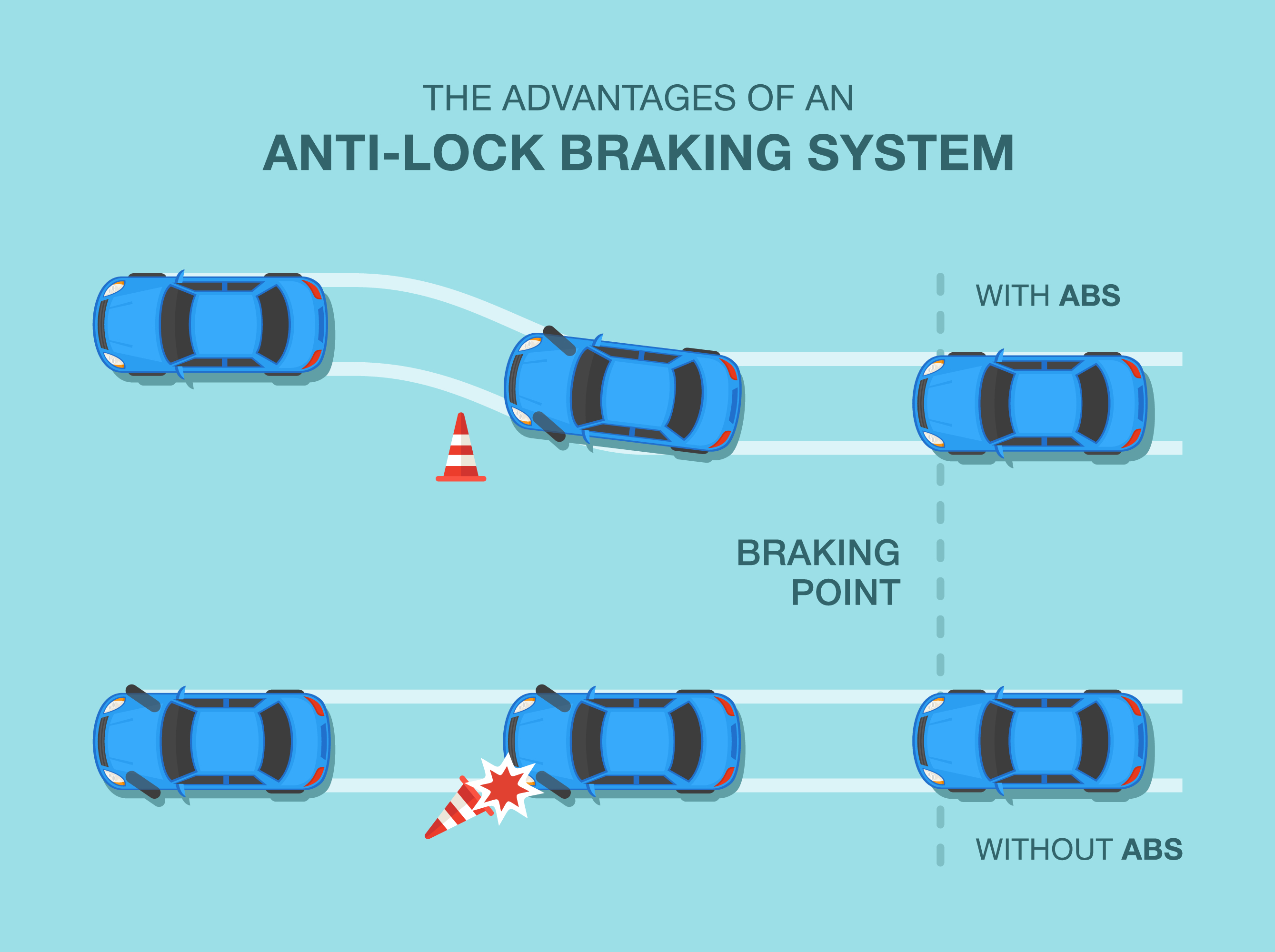 Since ABS was introduced in production vehicles, such systems have become increasingly sophisticated and effective. Modern versions may not only prevent wheel lock under braking, but may also alter the front-to-rear brake bias. This latter function, depending on its specific capabilities and implementation, is known variously as EBD (Electronic Brakeforce Distribution), TCS (Traction Control System), EBA (Emergency Brake Assist), or ESC (Electronic Stability Control).

A crash prevention system that assists the driver in reducing the risk of skidding or loss of directional control due to lack of traction (spinning out). Also commonly known as ESP (Electronic Stability Program), VDC (Vehicle Dynamic Control), and DSC (Dynamic Stability Control) just to name a few. 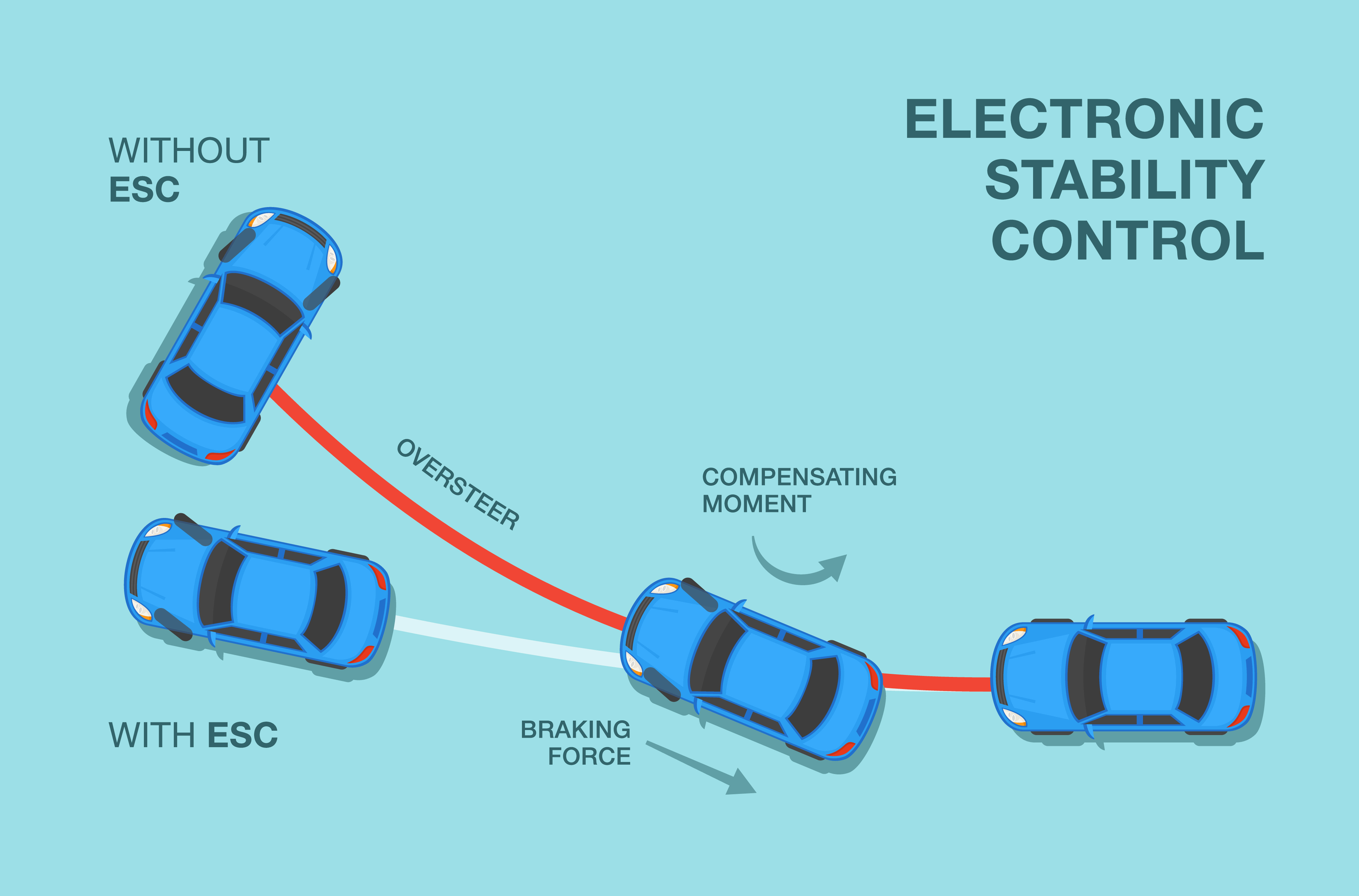 This is similar to and often confused with traction control, but is very different in how it operates. ESC helps keep the car in control when the vehicle is trying to skid or slide (approaching a corner too fast). It does this by applying the brakes (ABS) to one or all of the wheels to keep the car pointed in the direction you want. It may also cut engine power if the computer determines it will maintain vehicle in control.

Traction Control (TC) limits wheel spin during acceleration. It does this by applying the brakes (ABS) to the drive wheels only when slip is detected. Just like stability control, it can also cut engine power if you get overzealous with the throttle.

ESC uses data from sensors around the vehicle including the wheel speed sensors and the steering wheel sensor to detect the drivers input to determine if the vehicle starts to veer of its path. The computer can then apply the antilock brakes to one or all of the wheels independently to keep the car pointed in the direction you want. It may also cut engine power if the computer determines it will keep the vehicle in control. While there are limits to what it can achieve, ESC is extremely effective in assisting the driver to regain control of a vehicle in an emergency.

On 10th July 2014 the Land Transport Rule: Light vehicle brakes 2002 was amended, mandating ESC for light vehicles entering our fleet and this was gradually implemented into various classes of imported vehicles. As of 1 March 2020 Waka Kotahi NZ Transport Agency has mandated that all imported vehicles new and used must be equipped with ESC.

So chances are that if you don’t have it currently, your next vehicle should at least have this important safety feature.

The requirement to have ESC will not apply to some specialist vehicles, such as vintage, motorsport and scratch-built vehicles. This is consistent with other Land Transport Rules.

How do I know if my vehicle is ESC equipped?

Vehicles fitted with ESC will have an indicator light on the dashboard which extinguishes once the vehicles self-check process has completed. This feature activates when the vehicles ignition is switched on. If the lamp remains illuminated, it may be an indication a fault is present and the system may not operate correctly. There may also be a separate button in order to turn the traction control off if needed (not recommended unless stuck in heavy mud or snow). The most common icon displayed to identify ESC is a silhouette of a vehicle with squiggly skid marks depicted under the wheels.

If in doubt about the system that may be fitted to your vehicle, consult the manufactures handbook, or visit your local vehicle manufactures representative for more information.

With Easter around the corner and coinciding with school holidays, New Zealand families are preparing to holiday...

If money were no object, then most of us would know exactly what sort of car we...

Vehicle checks, what exactly am I getting?

If you are buying or selling a vehicle, a Pre Purchase Inspection is a very good tool...

Rest assured, we’re open and the team is ready to help. We're a little busier than usual...