The price of oil has very little to do with the price that you pay for petrol or diesel. Pump prices are influenced more by the commodity price for refined fuels – which includes the cost of converting oil into petrol or diesel – although the bulk of the petrol price is tax. 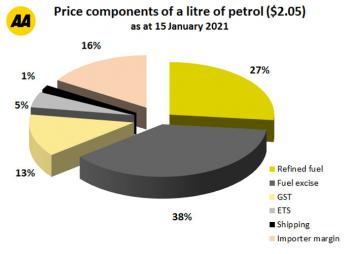 New Zealand has a de-regulated fuel price market and as such retail prices are influenced more by global supply and demand factors rather than the cost of refining fuel locally (although half our finished fuel is imported). The price you pay for a litre of petrol is made up of the imported cost of the petrol, taxes (fuel excise, ETS and GST), shipping costs and an importer margin (the amount the fuel companies earn to offset their operating costs, plus profit margin).

Although the cost of crude oil is one of several factors that comprise the cost of imported petrol or diesel, they are not intrinsically linked as the market prices of oil, and refined petrol and diesel can each be influenced by different factors, and therefore international refined fuel commodity prices may not move in line with crude oil.

Currently, just under a third of the pump price is the actual cost of refined petrol while about 55% is tax i.e. 77.284 cents per litre in fixed excise (not including the 10c Auckland Regional Fuel Tax), plus the Emissions Trading Scheme levy (approximately 9cpl) and GST (NZ has the sixth lowest fuel tax in the world; in many OECD countries, taxes account for around two-thirds of the price). This is important when monitoring movements in the international price of fuel: if the benchmark price changes by 10%, the pump price might adjust by 30% of that, i.e. only 3% (subject to the exchange rate). Despite our high taxes, New Zealand has some of the lowest fuel prices in the Western world. 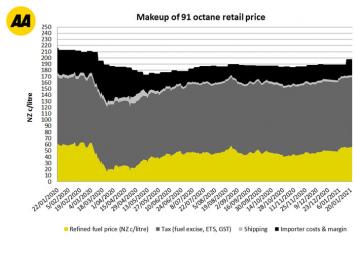 However, the retail price of a litre of diesel is made up quite differently. Since there is no excise tax on diesel (diesel users pay Road User Charges instead), the imported cost of diesel currently makes up nearly half the pump price, with the remainder being freight, GST, ETS (approximately 10cpl) and importer margin. Seasonal changes and the global demand for heating oil, or demand for heavy transport fuel (which is subject to economic conditions) also influence diesel prices separately to petrol.

On an annual basis, we calculate that the importer margin (the amount left after subtracting the fuel cost, taxes and freight from the retail price) in the past year has averaged about 45 cents per litre (regardless of whether retail prices are high or low), but can vary by several cents from day-to-day. The margin is even higher for diesel, at about 52cpl. These margins have gradually risen from an historical low of 15 cents per litre in 2008, which was at a time when oil prices were rising faster than retail prices. 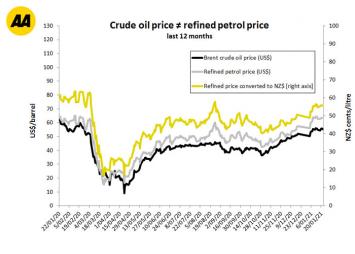 Exchange rate fluctuations are a significant factor often overlooked when comparing domestic and international prices. Refined prices are set in US dollars so a drop in refined petrol prices can be offset by a decline in the NZ dollar. That’s why it’s important to monitor the imported cost of refined fuel – i.e. the international cost converted into NZ dollars. The chart above shows that the price in NZ dollars broadly reflects changes in the commodity price.

Note the crude oil blend applicable for the NZ market is Brent oil which costs more than West Texas Intermediate which is more commonly reported in the media, and the correct benchmark price for refined petrol is Singapore blend, which also costs more than the US blend quoted here.

The chart above shows the international refined price (in US$) for petrol is usually higher than crude oil, reflecting the additional cost of refining. Refined diesel typically costs more again (see the chart below), due to stronger international demand from the commercial sector. 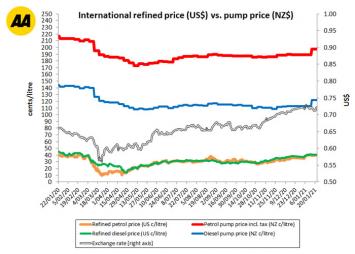 While exchange rate fluctuations offset some of the movements (up or down) in international refined fuel prices, overall retail prices do closely follow the benchmark commodity price. The chart alongside shows there is little delay in international price movements and subsequent changes to the pump price.

An independent review undertaken by Hale & Twomey published in July 2008 concluded that “retail prices go down as quickly as they go up” and that retail price movements generally lag international benchmark movements by a week1.