Tyres are an essential safety feature of your car so looking after them is important.

You can do this by regularly checking your wheel alignment and the pressure of your tyres which will enable you to save money on expensive tyre replacements as well as reducing fuel costs.

205 55R 16 91V is a typical example of a tyre size designation which is found on a tyre’s sidewall. Together, these indicate the dimension, structure, load capacity and speed rating of a tyre. 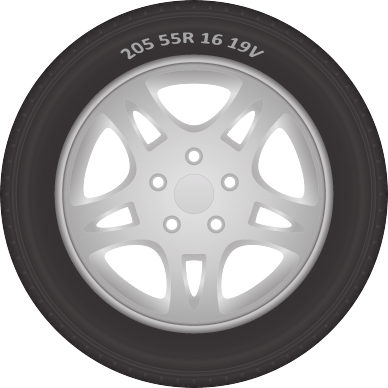 The remaining digits represent the service description of a tyre and are a combination of the load and speed rating.

Other symbols you may find on a tyre could include:

Taking care of your tyres

Keep your tyres inflated correctly. Inflate tyres to your manufacturer’s recommendations and re-check once a month. The recommended tyre pressure is usually recorded on the pillar of the driver’s door. Under inflated tyres can cause increased road friction, meaning that the tyres will wear faster and require move fuel to run the car.

All four tyres should be of the same tread pattern type. Ideally, the spare tyre should be identical. If fitting new tyres, put them on the same axle - preferably the rear. Regularly check the tread depth and tyre pressures (including the spare).

Driving with mismatched tyres is dangerous.

It’s because of various tragic accidents that have happened over the years that the Government has tightened up the rules and regulations regarding the types of tyres that can or can’t be mixed together on an axle or in some cases on all axles of the vehicle.

The AA recommends all four tyres should be of the same tread pattern as well as construction. Likewise, the spare tyre should be identical but if not then you should only use it as a short-term emergency until the regular tyre is repaired or replaced. If fitting new tyres, put them on the same axle - preferably the rear.

Among other Warrant of Fitness requirements, tyres on the same axle must be of the same size designation, construction and the same tread pattern type (e.g. asymmetrical, directional, rotational). However, there is no legal requirement for tyres on all axles to be the same tread, even though NZTA indicates that fitting four identical tyres (preferably summer) provides the best grip.

There are all sorts of different types of tyres to suit different driving conditions and types of vehicles. It can be confusing to understand what you can mix and match safely, especially if you don’t know too much about cars.

If you do know cars, you can find the rules that a Warrant of Fitness inspector is required to follow in the NZTA In-Service Vehicle Inspection Requirements Manual (VIRM). This information is online and gives the reasons for rejection at a WoF inspection, as well as a summary of the legislation.

It can be quite complicated though and so, if you’re in doubt, visit your local tyre outlet for advice or contact the AA Motoring Helpline on 0800 500 333 and select Option 2.

All-season or all-terrain (mud and snow) tyres are designed to perform safely in a wide range of summer and winter conditions. They are often marked with the letters 'M+S' on the sidewall and are commonly fitted to 4WD vehicles.

Snow tyres are made with a softer rubber compound and deeper treads because it helps maintain grip in the ice and snow. They can be distinguished by their deep square-patterned tread blocks with numerous fine blades. Some snow tyres are also marked with a 'mountain snowflake' symbol on the sidewall.

NZTA rules concerning the use of snow tyres or winter tyres now prohibit mixing snow tyres with normal tyres on the same vehicle. A vehicle will fail its WoF inspection if it has mixed tyres. This is due to several fatal accidents involving vehicles fitted with a mix of normal and snow/winter tyres. Subsequent testing showed that such combinations can result in different levels of grip on the front and rear axles, which can lead to a loss of control, particularly under emergency braking or in wet conditions.

NZTA says the majority of Kiwi motorists have no need to use snow tyres - those who do drive in ice or snow should have them fitted to all four wheels and change them back to normal tyres at the end of winter.

Snow tyres tend to be found on used cars imported from colder parts of Japan. These tyres are required to have 50% tread depth or greater to be road legal, however the minimum tread depth for snow or winter tyres in New Zealand is 4mm, while normal tyres are 1.5mm. So if you’re buying a Japanese import check the tread pattern on all four wheels and if any appear to be specialist snow tyres, arrange for these to be replaced with normal (summer) tyres. We also suggest having your car inspected immediately if you've ever experienced any loss of control, particularly if it's a Japanese import.

Do you need your windscreen repaired or replaced? We have a range of solutions that'll meet your needs

How to change a car tyre
Use the right tyre pressure

How to change a car tyre
Use the right tyre pressure