The introduction of the Clean Car Discount last month caused a sales performance reshuffle amongst the different car categories for the month. Used-imported cars slumped by 35.7 per cent and used commercials tumbled by 71.6 per cent. It was such a large reshuffle that for the first time in more than a decade a Ute hadn’t made it into the top-three line up for monthly overall registrations.

A significant change seen in the top-five new passenger vehicles was that all were either a hybrid or plug-in hybrid model. These shifts in vehicle buyer behaviour may suggest the Clean Car Discount may have swayed consumers towards lower-emitting options.

In April 2022, a total of 9,756 new passenger and commercial vehicles were sold, a significant drop from the previous month of 54 per cent (11,288 units) and a drop of 26 per cent when compared to April last year. Year-to-date, volumes remain up by 3.4 per cent.

While overall new-car market sales volumes have dropped, certain categories have been strong performers for the month. Sales for passenger cars and SUVs were the second-strongest result on record, largely due to sales of hybrid vehicles that became eligible for the Clean Car rebate last month.

At a time of rising fuel costs and squeezed household budgets it is no surprise that small and electrified cars saw the largest gains in sales during April, with these segments being arguably the biggest benefactors of the Clean Car Discount’s second round. 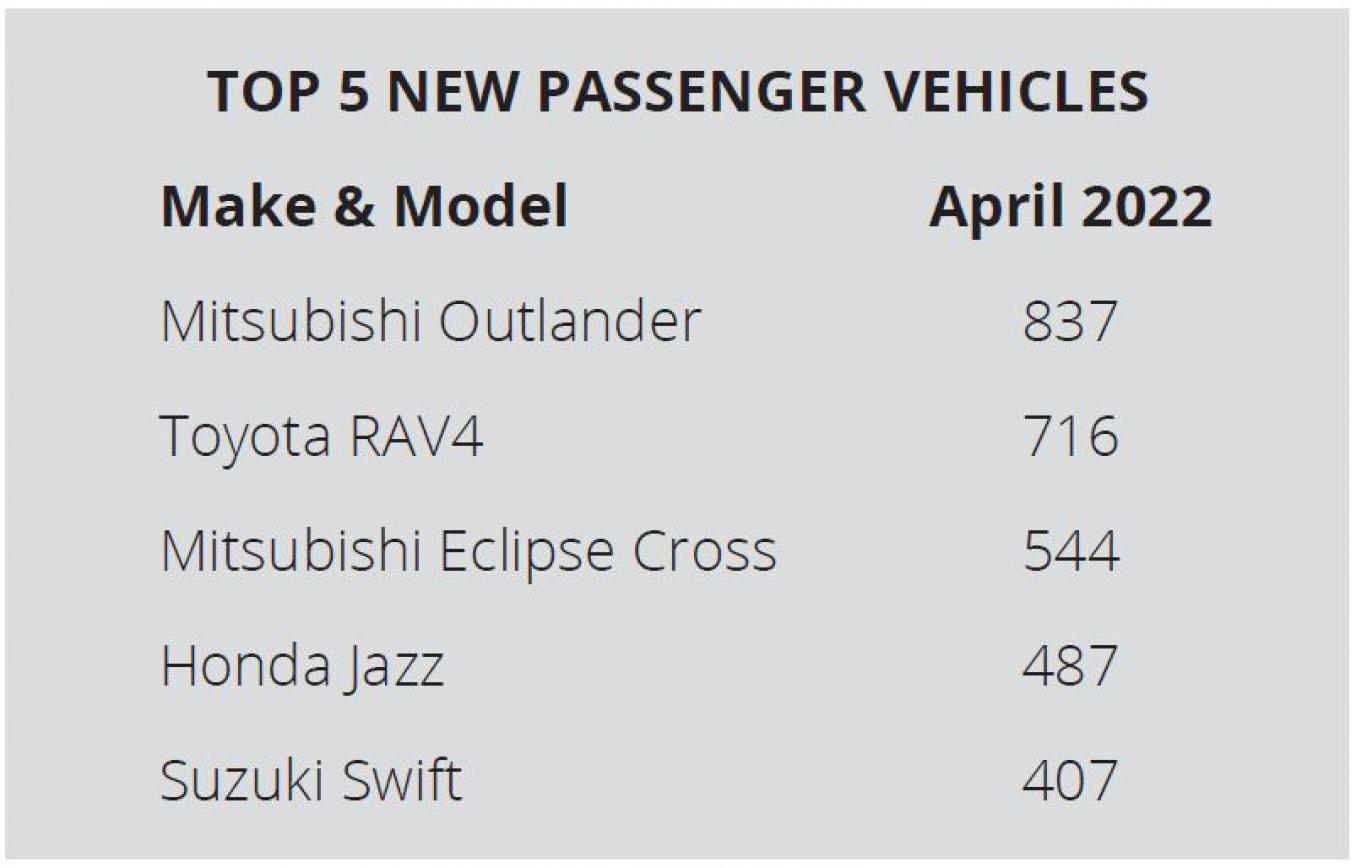 Disruptions to the supply chain have reportedly been the biggest operational challenge for new-car arrivals in recent months. With demand outstripping supply the industry is seeing a substantial reshuffle in the top-five new-passenger car models each month. However, in talking to some manufacturers and distributors the supply chain issues are starting to be resolved.

While last month the Tesla’s best-selling Model 3 took number one spot, it was absent from the top-five line up in April, not appearing in the 20 most popular passenger-cars. Due to the pre-orders which Tesla has, this will continue to be the case over the next few months with ‘boom’ or ‘bust’ months ahead. The popular Mitsubishi Outlander was the top selling model (837 units), followed by the Toyota RAV4 (716 units) and another Mitsubishi the Eclipse Cross (544 units) taking third position. The Honda Jazz (487 units) and the Suzuki Swift (407 units) both small cars taking fourth and fifth places respectively.

With the increase in fuel costs and growing concerns about the environment, new fuel-efficient cars are now an even more attractive option for those buyers wanting an affordable new car. We recently took a look at whether the transport support package will help reduce vehicle running costs and what alternative options are available for motorists.

Suzuki, a marque known for its stylish and frugal small-car line-up, saw four of its models placed in the top 20 for the month. The Swift (407), the Baleno 14th (125), the Jimny 17th (106), and the Ignis 19th (94). We recently had the opportunity to sample two small great Suzuki everyday cars the Suzuki Baleno and the Suzuki GLX Hybrid.

The industry attributes this drop in sales volume to a mixture of market factors, the main being the introduction last month of the Clean Car fee for high-emission models. Consequently, it was the first time in more than a decade that a Ute hadn’t made in to the top three for total new-vehicle registrations.

The top selling commercial vehicle for the month was the Ford Ranger (287 units), which is typically in the top-three line up, dropped to fifth place overall in terms of total sales, the Toyota Hilux dropped back even further (103 units), the Nissan Navara took third spot (85 units). New-comers to the top-five line up; the Isuzu F Series and Mitsubishi Express came in fourth (42) and fifth (41 units) respectively.

We will watch this space with interest over the coming months to see if the ‘real’ effect of the Clean Car Discount changes. 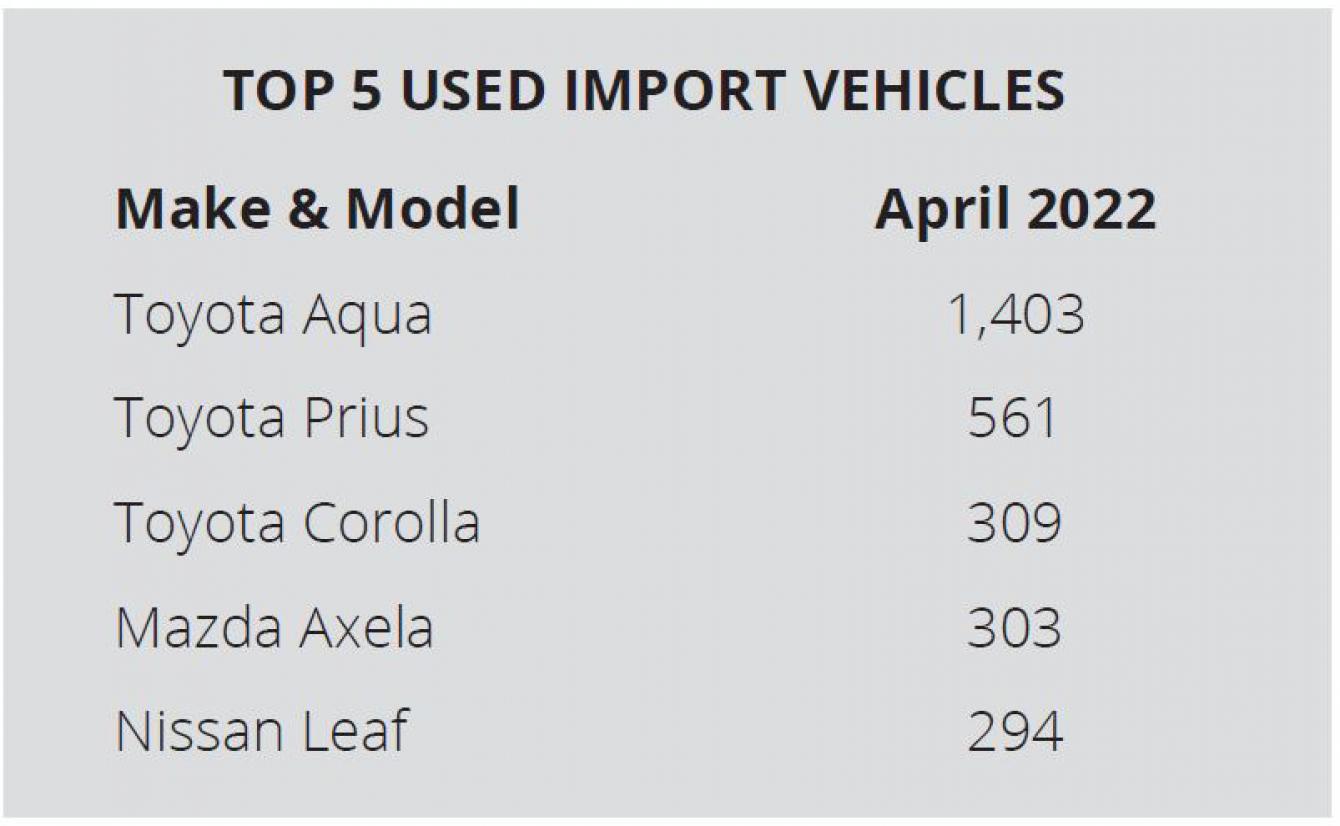 Used passenger import registrations predictably dropped last month with the market impacted by the Clean Car Discount. There were just 6,514 units registered, down 35.7 per cent compared with April 2021 and a staggering 73.2 per cent drop (17,835 units) compared with the previous month. After an unprecedented March result (24,349 units), year-to-date the segment remains up on last year by 30.5 per cent.

Vehicle imports were also down 11.6 per cent year-on-year with a total of 20,237 arrivals hitting the wharves in April compared to 22,905 in the same period last year. The used import industry continues to feel the impacts to the supply chain too – particularly from Japan. The ability to source domestically, continues to prove an advantage for dealers as the pandemic and Government regulation effectively reduce the supply of used imports from Japan.

The total number of passenger vehicles was down 8.2 per cent year-on-year with 16,889 arrivals in April compared to 18,410 the year prior, according to New Zealand Customs Motor Vehicle Statistics.

Imported used car dealers who had plenty of stock of low-emission vehicles such as the Toyota Aqua, Toyota Prius, and Nissan Leaf BEV did well in April as consumers searched for ways to reduce their vehicle running costs.

Following last month’s surge in BEV sales, the strongest month on record (1,761 units), the April result dropped back by 67.5 per cent to just 572 units - which was largely due to supply chain issues. Compared to the previous year the category was up by 214.3 per cent (390 units). Year-to-date this segment remains up a staggering 230.9 per cent (2,422 units).

The relatively new BEV model to the market - the Polestar 2 - hit the ground running in April in number one place (81 units), followed by the popular Nissan Leaf (71 units), and the Hyundai Kona (70) and Ionic 5 (53) third and fourth respectively. What was no surprise was the new Kia EV6 making it into the top-five line up (46 units) just one month in. Click here to read about this new entrant to the BEV market.

One to watch for is the German brand Opel, launching in New Zealand soon, featuring a fully electrified portfolio of new vehicle options. Click here to learn what we expect to see.

Petrol hybrid vehicle sales were expected to shoot up in April following the Government’s Clean Car Discount coming into play on 1 April 2022, with some buyers delaying their purchase to take advantage of the rebate.

The three bestselling petrol hybrids for the month were the Toyota RAV4 (525 units) followed by the Honda Jazz (461 units) and the Toyota Corolla (198 units).

We recently had the opportunity to review the new Suzuki GLX Hybrid. Click here to learn why we discovered this mild-hybrid to be the perfect everyday city commuter. 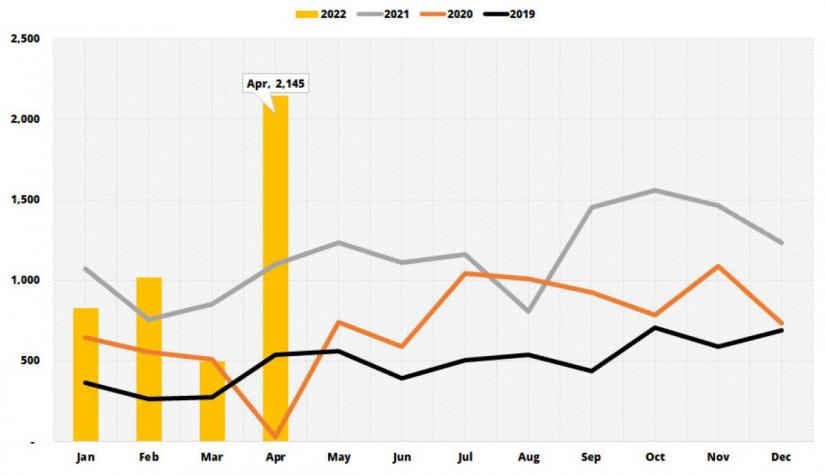 The three bestsellers for the month were the Mitsubishi Eclipse Cross (497 units) followed by the Mitsubishi Outlander (479 units) and then the MG HS (28 units).

Note: Some figures within this report have not been adjusted for de-registrations and have been sourced from raw data and some minor variances may occur.