There's no doubt about it - cats personify cool. From their slinky struts to an often disdain for mutts - they can be so hip it almost hurts. The team here at AA Pet Insurance thought it would be a great time to take a wee (virtual) sojourn around the country to pay homage to some of New Zealand's most fantastic felines. And to learn a little bit more about what makes them so damn groovy.

Starting at the top(ish) of the country, have you heard the buzz around Arnold, New Zealand Police's Specialist Search and Rescue cat? Yup...that's cat, not dog. He’s New Zealand's first police cat and pounced onto social media in August 2021 with a dazzling array of tricks, which were taught to him by his mysterious trainer - whose identity remains top secret.

Although we feel the New Zealand Police may be partaking in a little 'pulling of the leg' (or 'paw' so to speak), Arnold has made us laugh, and during lockdown those laughs were always welcome. You can keep in the loop of all of Arnold's antics by following New Zealand Police's social media.

Staying in Auckland, we stop and paws to remember the legendary Paddles. She created global headlines for her unique polydactyl feet (hence the name), promoting the merits of adopting from an animal shelter (there really are so many), running her own twitter account, and oh yes, of course... being the Prime Minister's cat. The nation mourned in 2017 when Jacinda sadly shared the news that Paddles had passed away after being hit by a car. The accident was shrouded in mystery until 2018, when an extremely remorseful neighbour fessed up that it was him behind the wheel that day when Paddles took her last dare devil run across the road. RIP Paddles.

Coming to you live from the Capital of Cool is Mittens the cat. An exotic Turkish angora that seems to embody the creative quirk of Wellington. He’s built up quite the following of fans via his private Facebook page, which boasts over 60k members from all over the globe. His slinky skedaddling through the streets of inner-city Wellington has seen him pop up in shops, homes, and heck even managed isolation facilities (hope you wore a mask Mittens). He's created quite the buzz with locals too - who eagerly await a visit from this friendly feline. This cat creates cool wherever he goes, and his legendary status was cemented in 2020 with his nomination for New Zealander of the Year by Kiwibank. 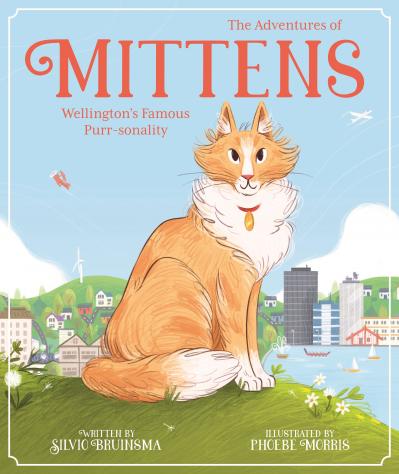 The Adventures of Mittens is available from booksellers nationwide. Penguin Random House NZ

We head down south now to meet the brilliant Bruce. Originally abandoned on the streets of inner-city Auckland on a cold, rainy day – he was so young his eyes were still closed. Luckily, Kathryn van Beek entered the scene. She discovered Bruce and took him under her wing, naming him after Bruce Wayne, aka Batman, who was also an orphan.

Kathryn's colleagues were so interested in the plight of lil' Bruce, she began a Facebook page for him so they could follow his recovery and growth. Kathryn recalls it was touch and go at the beginning and Bruce was not in good shape.

But the story had a super happy ending...yah. Little Bruce grew into Big Bruce and even changed colour to a midnight black in the process. Bruce now lives in Port Chalmers and Kathryn has gone on to publish two children's books featuring Bruce as the star, relaying the heart-warming stories of this determined cat. Good on ya Bruce!

Finally, you can check out more cool cats & dogs on the AA Pet Insurance Instagram page. Follow for your furry fix of fun!