Fiona Terry takes her kids on a ride through history

The impeccably maintained vehicles are among 290 classic and vintage bikes displayed as stylishly as works of art at this new world-class attraction.

“The collection covers the evolution of bikes,” facility manager John Shand tells us, pointing out one of the earliest models on display: a 1902 Peugeot, little different in looks to a bicycle.

And enthusiast John knows his stuff; he’s even raced against the legend that is Munro himself.

He points out the Peugeot’s belt-driven technology that at the time was highly advanced. “Chains came later,” he says. “Then proper brakes.”

Sturgess’ fascination with bikes began while growing up in California. His first purchase, thanks to saving hard while still at school, was a Hodaka Ace 90 dirt bike.

Years later, having become a successful businessman, he spotted a beautifully restored 1965 200cc Triumph Tiger Cub at a vintage motorbike show and bought it. His purchase reignited a passion which led to him acquiring the rest of the two, three and four-wheeled (yes, four wheeled!) ‘motorcycle’ treasures, all of which, he enthuses, have stories of their own to tell.

We used the QR codes attached to some of them to learn about these histories. With all the neck craning involved in appreciating the array of colourful vehicles, some of which are suspended from the ceiling, it could be easy to miss the other treasures artfully displayed around this stylishly converted former paint store. 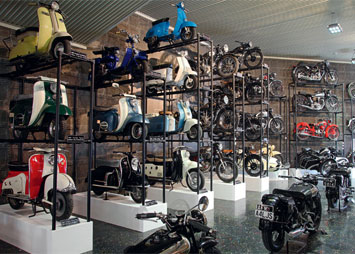 The framed vintage motorcycle posters – some priceless originals worth more than a number of the vehicles – evoke romantic images of life on the road over the decades. The most valuable, a pre-WWI advertisement for Swiss motorcycle brand Motosacoche, depicts a gathering of military personnel who seem to be bowing to the bike; a reminder of the reverence with which these groundbreaking vehicles were regarded.

Nearby, we stop to admire the most valuable vehicle (worth more than a small house) a shining example of a 1937 Brough Superior SS 100, every detail immaculate, including the leather toolbox and polished fishtail exhaust. It was so named because it was guaranteed to reach a speed of 100mph.

Brough enthusiasts have included Lawrence of Arabia, who died from injuries sustained after crashing one, and George Bernard Shaw.

Steve McQueen preferred Triumphs, John tells me, and in the upper gallery is a 1965 model with a shimmering gold tank. It's an identical model to the one on which the fleeing McQueen famously leapt the fence in the movie The Great Escape, although at the time it was disguised as a wartime BMW.

Most of the exhibits are pre-1970, but there is also a generous nod to the modern, including three ‘superbikes’, of which the gleaming red MV Augusta F4 with a top speed of 280kph was a favourite of our children, eight-year-old Charlie and 11-year-old Jasmine.

Through the giant glass screens that separate the viewing galleries from the spacious, immaculate workshop we could see one of the latest acquisitions: a rare 1931 600cc four cylinder Matchless Silverhawk. It is to be the facility’s first total in-house restoration project.

Once resident specialist mechanic Steven Scullion and his team have finished, it will look like it’s straight out of the catalogue, he tells us. We conclude that despite its high-octane subjects, this facility’s not one to be raced through.

A journey south buckled into a 1964 Rover takes an unexpected turn. 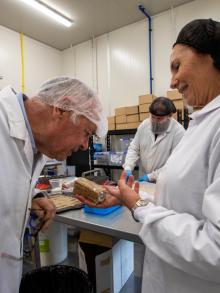 Peanut butter guru, Pic Picot, could only ever have dreamt of access to facilities now available...