First-term Transport Minister Michael Wood has some big challenges ahead, but he is quietly confident the country can change gear for a better future in transport.

What was your first car?

A 1981 Honda Civic that I purchased from the very elderly father of one of my mother’s workmates. He had owned it since it came into New Zealand and it was totally immaculate. Fair to say that, as a 16-year-old, I didn’t take quite as good care of it. It lasted me a couple of years and then went to the great scrap heap in the sky.

What car do you currently have?

We’ve got three boys, so it’s a classic suburban-family Mazda Premacy. There are three rows of seats, which helps stop the fighting, and there's plenty of luggage space for a family holiday. The vehicles that are supplied for Minsters to use are from the Hyundai electric range. I’ve got a Hyundai Ioniq which has been a real revelation in terms of its capabilities. 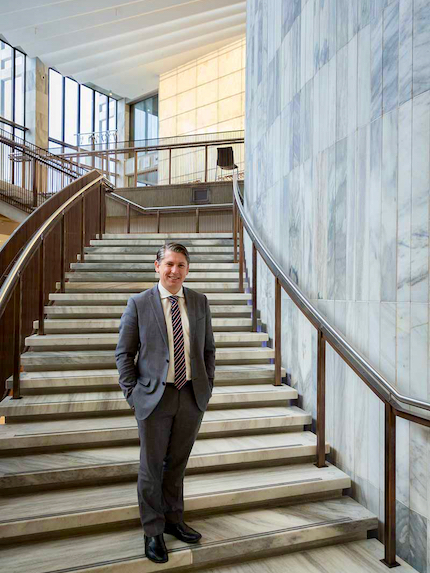 What is the number one thing that you would like to achieve in the role of Transport Minister?

The enormous challenge in front of us all at the moment is climate change. The commission has told us that by 2050 we have to basically decarbonise our economy, including transport. That’s the big job in front of me, but I look at it as an opportunity. If we get it right, we can deal with a whole range of important transport issues.

What is the transport issue that people raise with you the most?

Without any doubt it would be congestion. You just have to drive in one of our major cities and experience the frustration and the loss of productivity to see that we have an issue. My view is that over a 50-year period we’ve had insufficient investment in the system and insufficient integration between different transport modes. Now we’re in an era where we either have to start investing and making changes – and that will be difficult at times – or we kick the can down the road. We are very firmly in the former camp: it’s time to do something about it.

How can the Government get people to make significant behavioural changes from what they’re currently doing in transport?

I think the answer is relatively simple: provide efficient infrastructure that gives people the service they need. We know that when we do that, people take it up. The classic example is Auckland's North Shore busway, built under the previous Labour Government. It was ridiculed in some quarters; we were told that wealthy people on the North Shore wouldn’t ever use public transport. But that piece of infrastructure now carries 50% of people who cross the Auckland Harbour Bridge at peak times. That’s a good journey, both for those people and for the motorists using private vehicles as we’ve taken a massive number of cars off SH1 and off the bridge, improving their experience. I don’t think it’s so much about us getting into people's minds and changing their behaviour. Provide the infrastructure, make it work well and people will use it.

With a limited pot of money available for transport, how do you weigh up the trade-offs between spending on things that are priorities – like more public transport, walking and cycling – against the need for more maintenance investment on roads?

Waka Kotahi New Zealand Transport Agency has a very clear focus, that I agree with, on making sure that we do the bread and butter, which is maintenance. It is critical that we look after our existing assets in the first instance. Over our time in Government we have significantly increased investment there. Of course, we do face challenges. It’s costing us about 30% more to maintain a kilometre of state highway than it did five years ago. Labour, materials, environmental safety standards all come into that, but we want to make sure that maintaining the network very well is a real priority.

We know from recent Member surveys that 40% of people rate the roads in their area as substandard or very poor. Do you think that there is adequate investment currently going into roads?

There’s record investment going into roads at the moment. The National Land Transport Programme currently being worked through has an additional $600m for maintenance. We’re also continually looking at how we can support maintenance to ensure we have the safe roads people expect. So, yes, I’m confident we’re putting in a really good amount, but we’ll continue looking at what more we can do. If we can provide the infrastructure that gives a good number of people a real choice to use public transport to walk, cycle or encourage them off the roads, it will free up those roads for people who have to use them.

Some countries around the world are moving towards having median barriers on all roads that have a speed limit of more than 80km/h. Is that something that your Government is looking to do?

We’re not taking a blanket position on that. Speed is a really important part of the safety mix. At the end of every week I get a read-out of the road fatalities for the week which, as you can imagine, makes for pretty grim reading on a Sunday evening. Waka Kotahi has an assessment for what the safe and appropriate speed limit for particular roads are compared to the actual speed limit.

The new safer speeds rule that we’re consulting on at the moment is about moving things forward and looking at a whole region, looking at the whole network; it's consulting with the community, consulting with the AA, and with local Government about what a safe speed plan for that area looks like. And, at the same time, focusing on what the speed infrastructure needs are for that area. We try to build up a whole picture of how to make the network safer through infrastructure and speed limits. From a number of examples we’ve rolled out in recent years we know that when we have put safer and more appropriate speeds on some of these roads, we have saved lives.

If you had to pick one thing to reduce congestion what would you go for and why?

Two things immediately come to mind. The first is achieving a real mode shift in some of the congested parts of our major cities. If we can provide the infrastructure that gives a good number of people a real choice to use public transport, to walk, cycle or encourage them off the roads, it will free up those roads for people who have to use them. The second thing that has some real promise – which I note the Government hasn’t committed to this at this stage – is the prospect of congestion charging in some of our bigger metro areas. We currently have a Select Committee enquiry there. The international evidence shows some really good outcomes in terms of reducing congestion and using the roads in a more efficient way.

If you were able to snap your fingers and change one thing about Kiwi drivers today what would you choose?

Patience. We all know there are too many people on our roads who are impatient, who lose their rag, who take risks and ultimately causes serious injuries and deaths. We all need to recognise that the most important thing is getting ourselves and our families safely from A to B. If that sometimes takes one or two minutes longer because someone’s driving slower or you need to wait until a safer overtaking opportunity; it’s better to wait for one or two minutes.

Reported by Dylan Thomsen for our AA Directions Spring 2021 issue