Press the ‘power’ button and you don’t hear a thing. The dash lights up with all kinds of messages, but there’s no whirring starter motor, and no engine noise at all. And when you put it in gear and push the accelerator, all you hear is a loud, rising whine. That’s the kids in the back. The noise of the car’s electric motor is all but inaudible.

We’re only a few kilometres into our trip, and I already like it. A lot.

We hit the motorway at Johsonville and accelerate to open road speed, and still the only noise from under the bonnet is a subdued hum. Apart from the wind passing over the sleek bodywork and the distant, muffled rumble and thud of the rubber on the road, the car itself is utterly silent. And now that we’ve finally got the app that allows the iPad to talk to the on-board entertainment system up and running and the talking book is reading Harry Potter for us, the kids are silent, too. Suddenly Taupo doesn’t look so far away.

Kiwis are relatively accustomed to hybrid vehicles such as Toyota’s Prius and Camry Hybrid, and the hybrid version of the Honda Civic. Hybrids have an electric motor and a petrol-fuelled internal combustion engine (they’re a cross between, or hybrid of, two engine technologies). At low speeds, the electric motor does the honours. At higher speeds, or when more power is required, the petrol motor kicks in. The electric motor is there to make the operation of the car more efficient: the petrol motor isn’t required for much of what you do with a car in urban traffic – idling at the lights, stop-start, low-speed movement in heavy traffic. A lot of what the petrol motor does in the urban context is charge the battery. And when you’re going down a hill or coasting to a stop, the electric motor changes mode and acts as a generator, slowing the car down and recharging the battery in a process known as ‘regenerative braking’, thus capturing the energy that would otherwise have been dispersed from conventional brakes as heat.

Plug-in hybrids like the Outlander take the hybrid concept a step further. The electric motor – there are actually two – is capable of driving the car at higher speeds with no help from the petrol motor. And instead of charging exclusively from the petrol engine, the batteries can be charged from an external source – in the Outlander’s case, a charging unit that plugs straight into the standard power point in my garage.

The instrument panel as we reach Plimmerton tells me we have only five kilometres of electric range left. If I were driving the other kind of electric car on the market, a BEV (a Battery Electric Vehicle, like the Nissan Leaf), my palms would be sweaty by now, because the limitation of a battery electric vehicle is that once its batteries are depleted, it won’t go again until it’s been recharged. The Plug-in Hybrid is designed to soothe what the industry calls ‘range anxiety’.

Once the critical moment comes just north of Plimmerton, there is an all-but-imperceptible shudder and suddenly we’re not much cleaner or greener than any other late model car on the road. We’re running on petrol, but at least we’re going to make it to Taupo.

"The technology exists to fully charge a car like the Outlander in just 20 minutes..."

The next day though, I get a first-hand experience of range anxiety. After recharging overnight, the car is boldly telling me we’re good to go a couple of hundred kilometres on a combination of electricity and petrol. So I snub the petrol stations we pass on the way to Whakapapa. It’s only as I start the car in the ski field carpark (mmm, heated seating!) for the return journey that I begin to wonder if this was wise. And here I am on the wrong side of the Pihanga Saddle, ten kilometres from Turangi, with the car suddenly not so sanguine about going six. You see, it busily does on-the-fly calculations of the range that its remaining energy resources can yield based on the way you’re driving. What’s good for a couple of hundred kilometres as you’re cruising along on the flat is suddenly only 75kms as you labour up a hill. Luckily, with a bit of regeneration downhill, we’ve got some electricity back in the bank and it looks like we’ll make it. Still, as the display shows not only the image of an electric plug, but also that of a petrol bowser and the stark imperative ‘refuel’, I’m very nervous.

Speaking of the future, it’s expected that in a few years' time, you’ll be able to plug your car in at a service station as well as (even instead of) putting petrol into it. The technology exists to fully charge a car like the Outlander in just 20 minutes – a cup of coffee, a chance for the kids to stretch their legs. Long-range, purely electric motoring promises to be stop-start, but also leisurely. It’s quite an appealing prospect.

It’s when we get home and back into our daily round that the PHEV concept really proves itself to me: Monday, drop kids to school because it’s raining (1.5km), collect them, drive to gym, do shopping (41km); Tuesday, deliver Hugh to playdate and collect (3km); Wednesday, deliver Nell to playdate and collect (5km); Thursday, kids’ tennis, cricket, then my own night class over in Petone (38km); Saturday, cricket for Hugh, playdate for Nell (26km); Sunday, hockey for me (17km). That’s 131.5km for the week, an average of 19km per day  – a little less than the daily average of 28km for the average urban Kiwi driver. In all that time, because I was able to charge the car between trips, I didn’t use a drop of petrol. And since the car uses only around 10 kW/h to recharge from zero, it only cost about $3.00 for the whole week’s running around.

As I start my own car after regretfully handing the Outlander back, I wince at the crude whirr of the starter motor and the flutter of that dirty old internal combustion engine. And as I draw away from the kerb, there’s a loud, rising whine from the back.

"Daa-aad. We want the white car back." 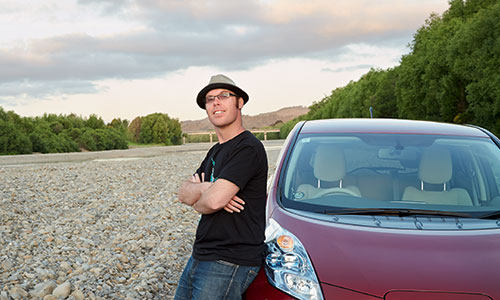 It was commuting daily from his Lower Hutt home to work in Wellington’s CBD by bicycle that first got Sigurd Magnusson thinking about cleaner vehicle technologies. 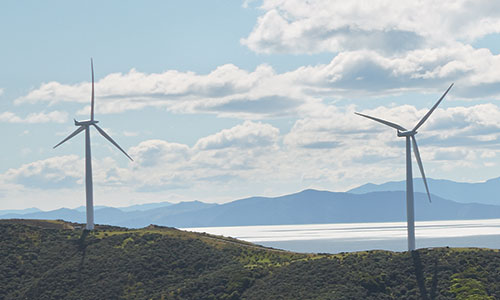 Mark Stockdale looks into how electric vehicles are suited to our roads.