How will new technology affect how we get round? Peter King reports.

Driverless cars are going to change the world of mobility. The only question is when.

In 2004 the American military issued a challenge to researchers to make SUVs that could drive themselves over a 150 mile course. Not one made it. The following year, the robot cars literally raced each other for the finish line. The pace of progress in this technology has been massive.

This may be because computer companies have led the way. Google is testing its own design of driverless cars on the roads of California although they have drivers on board in case of emergency.

Apple has a secret car project. Taxi competitor, Uber, is testing adapted Volvos in Pittsburg, while other designs are being tested in Britain, Germany, Japan and Australia. Everyone, from giant computer companies like Google or Apple (and Apple is bigger than the top five automotive manufacturers), to traditional car makers and new firms started by universities, are working on robotic cars.

By exchanging data with each other, radar-equipped cars will be able to follow each other closely, choose routes that avoid congestion and stop together, avoiding nose to tail crashes.

Many, including car manufacturers, also believe the technology will change the way cars are owned. In cities there will be a trend towards car share firms replacing private ownership, because operating shared vehicles that constantly rove for passengers rather stay parked most of the time will be cheaper to operate if there’s no need to pay a driver. By 2040, it’s likely a car will look more like a lounge or office and you will hail and pay for it with your phone.

“The sooner we embrace this technology, the sooner we can deal with issues of growth in big cities like Auckland,” says Martin Matthews, the former Secretary for Transport and New Zealand’s only member of the international Intelligent Transport System Congress’s hall of fame.

“Think of the billions that might be spent on trams and rail, when in a decade or so, we can use autonomous vehicles.”

And embracing the technology is what New Zealand is trying to do. At the ITS World Congress held in Melbourne last year, the Ministry of Transport was busy promoting New Zealand as a potential technological testbed. The Minister of Transport, Simon Bridges, even extended his stay at the conference to assist with high level pitching.

But when will this technology reach our shores? This year, Christchurch airport will begin trials with a driverless Navya shuttle. It will ferry people from the car park to the terminal and back at around 20km/h. While a vital first step, it’s a long way from cars that can drive themselves on any road, in any conditions, without human intervention.

The good news is that robot cars are very good at avoiding crashes. With the precision of guided missiles, robot vehicles’ radars detect tiny clues that allow them to prevent accidents far quicker and more accurately than a human ever could.

The parts needed for that are being installed in modern cars now. Adaptive cruise control uses a radar so the following car always matches the speed of the car in front. Lane departure warnings use cameras and software to estimate when the car is leaving the road. Self-parking demonstrates just how clever a modern car can be. But that’s still a long way short of self-driving. For that, robot vehicles need better software and computer ‘brains’ and lots more information.

For example, the huge robot trucks in the mines of Western Australia can only work because of land-based GPS transmitters providing positioning signals accurate to one centimetre.

In New Zealand, our satellite GPS is only accurate to tens of metres. That’s more than a lane width and not accurate enough for autonomous vehicles.

There is also a problem with infrastructure-to-vehicle and vehicle-to-vehicle communication for things like hazard warnings and routing. America and Europe are adopting variants of the Wi-Fi standard but Japan has a different standard which would interfere with mobile phones here. That means that second-hand imported Japanese vehicles with this technology intact will be banned; and today about half our annual vehicle supply comes from Japan.

There is also another problem: hacking. Tests have shown road signals can be hacked, cars taken over from the driver, and crashed. Computer security for transport is a completely new discipline that authorities around the world are taking very seriously. 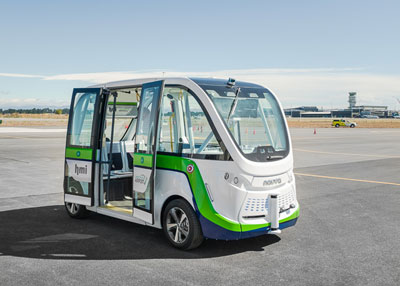 All this shows there is a big gap between technology optimism and pessimism. Optimists see possibilities, pessimists see problems. But if you don’t anticipate problems you aren’t safe.

By training, engineers and lawyers are pessimists. On the other hand, it is widely agreed that the only way to find out how to make new technology safe is to learn, by doing.

An example of this in action was the Port of Rotterdam’s involvement in a study of truck ‘platooning’. This is where a lead truck sets the speed and direction of the following truck, although both trucks have drivers. The platoon saves fuel, money and CO2. It’s been talked about for over 20 years. Technically it’s similar to adaptive cruise control and lane departure, but it wasn’t until last year that it was even tested. Doing was essential for finding the problems.

While the problems of urban transport are a priority, it’s likely New Zealand’s first commercial fully-autonomous vehicles will do jobs in farming, forestry and quarrying because road rules don’t apply on private land. From robot mowers to tractors and hay carriers, the advantage of machines that drive themselves will save money and change some industries completely.

Ironically, by 2030 all these machines might finally match the intelligence of that original farm machine: the horse. That’s important because horses aren’t stupid. Like human drivers they can understand a situation in a way that can only be learned. While today’s machines can respond to events infinitely faster than we can, their lack of basic horse sense will probably be a source of exasperation for human drivers who share the road with them. Even today it is a rare robot car test drive that does not need some help from a human at some time.

It won’t always be this way. Brain-like supercomputers are developing quickly. IBM’s ‘Blue Gene’ project has built a single 25,000 processor cat brain and hopes to reach human equivalence with 880,000 processors within three years. Putting that in a car will take time but it is quite possible that in 30 years our cars will be literally smarter than we are.

In a world where advances, money and safety have to be balanced, progress will always be uncertain. There is no doubt that as a country we have to start preparing for an intelligent transport system which will develop at least as fast as the computer revolution has over the past 50 years, but all we can know for sure is that the future will be completely unlike the past.

Reported by Peter King for our AA Directions Spring 2020 issue