The road is calling. It reaches out towards the sunset, shaping itself to the contours of the sea on one side, while on the other rises a forested hill. The sky is a vibrant, crisp blue. I sit astride a machine of powerful latent energy, activated by the twist of my wrist. The wind presses against my face, bringing the scent of sea and pine needles and damp earth.

Leaning into and then coming out of a curve, I feel on the cusp of adventure. This is the wild thrill of unfettered mobility.

Like me, thousands of baby boomers around the world have heeded the call of the road. Men and a growing number of women over 50 are choosing motorcycles, with an excess of 1000cc, for commuting and journeying. Dubbed ‘Born Again Riders’, they are no longer consumed by work, mortgages or family responsibilities. And they are looking ahead to a future of more time while mindful of a shrinking number of summers.

They are drawn to motorbikes for varied reasons: an attempt to recapture the energy of their youth, to overcome a divorce, the enjoyment of being with a group that share a common interest, relishing a solitary mindful experience or simply the freedom to choose to go this way or that.

Meeting me at an Auckland waterfront coffee shop is Peter, 64, retired general manager for one of the Goodman Fielder companies. He wears a leather jacket with tassels on the arms, emblazoned with the Harley logo, and he’s an active member of HOG (Harley Owners Group). “Ten to 30 Harleys leave AMPS (Auckland Motorcycle and Power Sports) every Saturday. I met my best mate and my wife at HOG. My wife got her first motorbike, a Harley, at 63 – a 1700cc.”

Riding hones your thinking, refines your mind and keeps the edge.

Riding motorcycles is in Peter's blood. “My father was a dispatch rider in the war. We used to go to town on his old Norton. My mother was totally blind and sat on the back, my father steered, and I stood in between them wearing a Snoopy hat with my hands on his shoulders.” Laughing, he acknowledges: “I’m just an old man looking for the boy in me”. 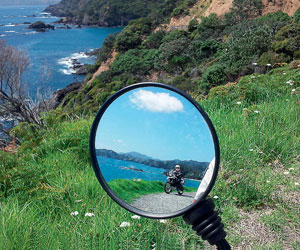 Howard, aged 60, runs the Ulysses Club. “We have 2,800 members throughout New Zealand. You have to be 40 years old to join. The vast majority of the membership is over 50.” Riding in groups, he tells me, has the advantage of being safer than riding on your own.

Pro Rider Training director Karel Pavich reviewed 2,000 riders in the Pro Rider database. She says 35% are 50 and over, 25% are in their 40s, and 30% of them are women. “A lot of the women want the empowerment. It gives them a feeling of being strong and independent.”

“I've been riding for decades,” she says, “and there is no question that the fun, the freedom, the exhilaration of riding a bike in a beautiful country on fantastic roads is really, really hard to beat”. There is laughter in her voice.

In his book Zen and the Art of Motorcycle Maintenance Robert Pirsig wrote of motorcycling as being “completely in contact with it all. You're in the scene, not just watching it anymore, and the sense of presence is overwhelming”.

But, for motorcycle riders there exists a duality: they ride to keep their edge, to remain in life, especially as they get older.

Yet, with riding a motorcycle they are at greater risk of having a serious accident. For more than 20 years, there has been concern about their safety.

According to the Ministry of Transport crash statistics for the year ended 2012, motorcyclists in the over-40 age group accounted for the majority of motorcycle accidents. There were 32 deaths and 522 injuries. Thirty-three percent of these accidents relate to single vehicle accidents.

A motorcycle mechanic I spoke to pointed out that rear tyres in fatal accidents often had flat spots, meaning that the rider panicked and hit the rear brake hard. He says most of the braking should be done with the front brakes; rear brakes should be used only about 30% of the time.

Karel Pavich agrees, saying that in single vehicle accidents riders lose control of their bike going around a corner. “They are not aware of the hazards and don't know how to use the brakes properly.” She believes accident numbers could be reduced by changing the licensing rules. “It's too easy to get your licence. All it entails is a one-to two-hour session riding around some cones. It should be mandatory for everyone to undergo a training programme prior to getting their licence.”

When older riders come to Karel for training, their riding ability is often substandard. “They might have ridden 30 or 40 years ago, as teenagers. They’ve had no upskilling. Older riders are at greater risk than younger riders because their reactions are slower. Other problems are strength, endurance, vision and orthopaedic issues.”

Motorcyclists need to fully understand that they are harder to see and don't have the sort of protection around them that a car offers, she says. “They have to learn to manage their risks – how to control their machine, how to ride safely among other road users and be aware of hazards.” Some of her courses, designed to develop safe riding skills, are subsidised through ACC in a bid to reduce the cost of accidents.

Karel also believes bike shops should take more responsibility to ensure that people buy motorcycles suited to their needs and that they have protective riding gear.

Howard expects to keep riding into his 80s. In his view, New Zealand is one of the best countries in the world for riding, especially the South Island. “The climate is ideal, the scenery spectacular. Some of the most beautiful riding spots are through the passes in the South Island.”

“When you get to my age,” says Richard, 72 and a lifelong rider, “every day is precious”. He tells me he rides because of the thrill he gets from it. “When I stopped riding for a short while, I felt I was getting old and tired. Riding hones your thinking, refines your mind and keeps the edge.”

It’s a recurring theme amongst older riders – a desire to capture and hold on to the energy of life, to feel the surge of excitement which asserts, 'Yes, I am still very much alive'.

Tempered, of course, with a healthy awareness of the risks involved.