Jacqui Madelin takes the Lamborghini Huracán supercar out for a spin.

I had pictured myself carving through picturesque bends or rumbling past the turning heads of admirers at café tables, nonchalantly pretending I own this eye-catching Lamborghini Huracán supercar.

Instead, I was listening to the photographer directing me as I tried to thread this 2.236-metre-wide*, road-hugging piece of automotive sculpture through his chosen photo location, an admittedly uber-cool, architecturally-designed underground parking garage, but one stippled with posts and pillars poised to scratch the paintwork.

With nothing visible in the rear-view mirror but a mighty 5.2-litre, 10-cylinder engine, I was blessing the rear-view camera and the fact this car’s round-town persona is so tractable. Indeed, you could almost get away with using it every day were it not so low; a button lifted the nose 30mm so we could climb the ramp and access the street without disaster.

Speaking of practicality, this 1.16-metre-high wedge may be pared back to the performance basics, but it’s almost roomy. The up-front boot looked laughably small but fitted a carry-on suitcase loaded with camera gear and the photographer’s pop-up light reflector. The shelf behind the shapely and supportive sports seats held my bag, the photographer’s tripod and another bag with room to spare – all prevented from flying forward by solidly-moulded head restraints.

And they could well fly forward, for the spec sheet shows this engine delivers 449kW and 560Nm via a seven-speed dual-clutch auto with paddle shift, and that the Huracán is capable of hitting 100kph from rest in just 3.2 seconds before topping out at 325km/h. Fortunately, the massive 380mm carbo-ceramic discs should prove equally effective at stopping, while the magneto-rheological suspension will adjust the damping automatically to the road.

Photography sessions are wonderful for noting details: the pseudo fighter-pilot red cover you flip up to start the car, the sharply-sculpted lines leading your eye into various air intakes, the steering wheel buttons for indicators. We could go on. 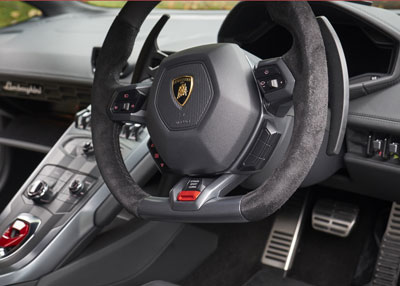 But with the photos finally in the bag, it was time to tool down the motorway in ‘strada’ or ‘street’ mode en route for a bit of swervery, while fiddling with the satnav and other controls, all neatly to hand, and admiring the cabin interior and its few, but vital nods to real-world use, like the under-dash tray for tucking your wallet and the armrest cubby just deep enough to fit your iPhone.

With bends looming, I flicked the steering wheel switch to ‘sport’ to hone the car’s responses and alter the muffler tuning, flicked it down a gear or three, braced myself and hit the accelerator.

Suffice to say there is more than enough there to break any speed limit you care to name in less time than it takes to say ‘ear-to-ear grin’.

With all four wheels gripping the tarmac and the weight mounted mid-ship and incredibly low, the car catapults forward and almost swivels around bends: that old cliché about cornering on rails finally ringing true.

Sure, the suspension didn’t exactly iron out bumps as much as semaphore their exact contours, but this is an unashamedly performance-oriented beast, as the soundtrack continuously reminds you.

Especially if you slow, as I found on the way back when seeing a police car coming the other way.

I wasn’t actually speeding, but you know how it is, lift off and check later. However, the ‘sports’ set-up immediately went into overdrive, the muffler popping and crackling with more verve than the 1812 Overture, and the auto automatically blipping the throttle to a feral fusillade from beneath the bonnet, attracting the immediate attention of the constabulary – who were no doubt confused to see their radar reading on the side of the angels.

Yes, you can feel like a feral racer without having to drive like one in a car like this, no doubt a refinement introduced for owners who want a reminder of what their Huracán can do without risking a ticket to hear that glorious V10 orchestra.

The high-gloss black forged 20-inch wheels add $11,200, the vital parking camera and rear sensors $6240, plus enough other extras to take you well above the ‘used’ price if you want the same car with zero kilometres on the clock.

It’s a bargain. Just not for real-world buyers like me.

Reported by Jacqui Madelin for our AA Directions Spring 2020 issue