New Zealand is a camper's paradise. There are, in fact, more than 800 vehicle-accessible camps, ranging from tent spots in the wilderness to roomy, powered sites for campervans. Here's our guide on how to find the right site for you.

Irrespective of the passing of the Freedom Camping Bill in September, there are still plenty of places to camp outside of established sites. Over the coming years these are likely to be designated more formally, but, for now, your best bet is to ask the local i-SITE where they are. In order to freedom camp legally, your rig-up must be self-contained, which means having your own toilet, and freshwater and greywater storage facilities.

The Department of Conservation administers 250 road – or boat – accessible campgrounds, around 95 of which are designated backcountry or basic. This means they have toilets and water at the very least, although many also have picnic tables, cooking shelters and fire pits. Most are small and in remote, scenic locations.

A further 148 DoC campgrounds are designated standard, providing toilets and water, as well as some or all of the following: cold showers, wood barbecues, fire pits, picnic tables, cooking shelters and rubbish bins. They come in all shapes and sizes and are spread throughout the country. Local and regional council camps – such as those in public domains, forest parks and reserves – offer similar levels of amenities. 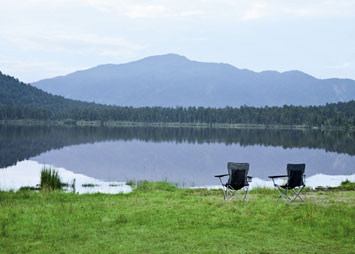 There are around 400 commercial holiday parks in New Zealand. Those at the smaller end of the scale are often DoC serviced sites; run by community groups; or are privately owned and

operated independently of the chains. Almost all will have hot showers, kitchen and laundry facilities, and sometimes much more.

Big, bright, with all the bells and whistles, the majority of New Zealand’s large holiday parks manage to feel leafy and natural, being well landscaped, with plenty of grass and trees. Many are located in enviable locations – behind dunes, beside rivers, or on the edge of forests. Even at its most commercial, this sector still offers genuine hospitality and personal service.

Like-minded folk can holiday together at specialist sites, including Christian camps and clothing-optional parks. Members of the 43,000-strong New Zealand Motor Caravan Association avail themselves of a network of ‘pop over properties’, koha camping spots with a range of facilities. 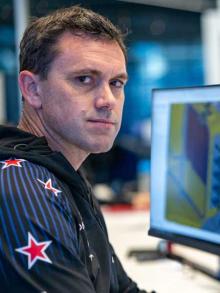