Imagine waking to singing bellbird and saddleback in the back garden, watching tuatara bask in the morning sun, and listening to the calls of kiwi as twilight settles.

It may seem a far-fetched ideal, a scene reminiscent of Aotearoa hundreds of years ago. But following the government’s announcement last year that it wants to rid the country of its most damaging introduced predators, possums, rats and stoats, by 2050, it’s possible our children and grandchildren will enjoy that reality.

The Department of Conservation Threatened Species Ambassador, Nicola Toki, says New Zealand may be small in landmass and population, but she believes we’re a country destined for greatness.

“We were the first to give women the vote, and the first to put man on Mount Everest. This is another opportunity to punch above our weight,” she says.

If the ambitious goal is realised, it could make New Zealand the first country in the world to rid its land of introduced predators.

The announcement was inspired by the vision of Kiwi scientist, the late Sir Paul Callaghan, who called a pest-free country “New Zealand’s Apollo Mission” and described the idea as “crazy and ambitious, but worth a shot.”

The government is giving it a shot. An additional $28 million over four years will be invested on top of about $70 million already spent on predator control every year by government, regional councils, businesses, iwi and community groups. We too can give it our all, and make traps as much of a regular backyard feature as trampolines and barbecues.

“Anyone can be part of this mission. Communities all over the country have already come together and started trapping in their backyards,” Nicola says.

Businesses like the Top Ten Holiday Parks group are showing support by trapping across parkland. 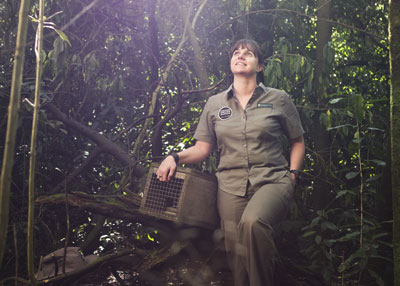 Three main players are driving New Zealand’s Apollo Mission: the Department of Conservation, which controls 30% of the country’s land areas, Predator Free 2050 Ltd, a company set up by the government to invest in large-scale landscape projects and breakthrough research, and the Predator Free New Zealand Trust, an independent team established to grow the vision, support volunteers and connect community groups.

Predator Free Wellington is a joint project by philanthropic trust, Next, and regional and city councils. It aims to make Wellington predator free, beginning with Miramar Peninsula, by killing one rat at a time. Households are encouraged to set child- and pet-friendly backyard traps and so far this year, close to 2,000 rats have been trapped and killed. Zealandia is a predator-free zone protecting endangered birds, reptiles and insects. The reserve has 30km of walking tracks, and, as well as providing an example of what can be achieved, creates community awareness of conservation.

“Both are incredible public engagement tools, especially now we are seeing an overflow of birds from Zealandia settling in private backyards,” Jessi says. “There’s a groundswell of people who want to do something after spotting kaka and saddleback in their own gardens and thinking ‘Gosh, I need to do my bit to ensure they remain here.’”

While 2050 is still more than three decades away, interim goals are in place with 2025 targets, including achieving a scientific breakthrough to eradicate at least one pesky breed.

“Right now, we don’t have the technology to do that, but all over the world scientists are working on it,” Nicola says. She’s referring to ‘gene editing’ technology, involving methods of control to cause infertility in mammals to reduce a population to very low levels. ‘Gene drive’ technology is another option being investigated which would make infertility more likely to be passed on to a pest’s offspring.

Sound scary and too futuristic?

It needn’t be. Dr James Russell is on the Predator Free 2050 Science Strategy panel and says while New Zealand doesn’t currently have regulations in place to allow that sort of technology to be used, it’s a conversation we need to have.

“If we can develop a new genetic technology, we need to ensure people want us to use it,” he says. “I’m all for exploring the options and would like to see whether it’s applicable across our landscapes. I’m optimistic that scientists can make a breakthrough and that we can use the technology as an additional tool of eradication, because we need to have several options in the toolkit.”

James says gene editing and gene drive technologies aren’t silver bullets and won’t be the only cures to wipe out entire predator populations. That’s why it’s vital to consider a combination of options, he says, like developing a lure to trap rats, stoats and possums easily, or a species-specific toxin that won’t harm native birds.

While science is still developing, current trapping technology is also advancing. Auto-resetting traps and mobile phone notifications to signal when a trap goes off make eradication easier and more effective. Poisons are still used, including the controversial 1080, across large-scale landscapes and national parks.

Other interim goals include making more than 20,000 hectares in the country predator free without the use of fences, eradicating all pests from all offshore island reserves, growing the number of predator-free communities, and removing or suppressing pests from an additional one million hectares of land on top of existing predator-free areas.

Most of New Zealand’s native species aren’t found anywhere else in the world, yet we have the highest proportion of threatened species. Scientists estimate 25 million birds die each year from attacks by rats, stoats, possums and feral cats. Mice will be targeted further down the track, as will feral cats in areas where there are no other introduced pests, such as Stewart Island.

“Many people don’t realise that we have 3,000 species that are in some trouble, and 800 species that are in serious trouble. It’s an enormous amount,” Nicola says. “We can’t take our foot off the accelerator and we can’t afford to sit back and not do anything, otherwise we will lose everything that defines us.”

Reported by Monica Tischler for our AA Directions Summer 2017 issue

A third of New Zealand’s islands are already completely predator-free as well as 24 fenced sanctuaries including: