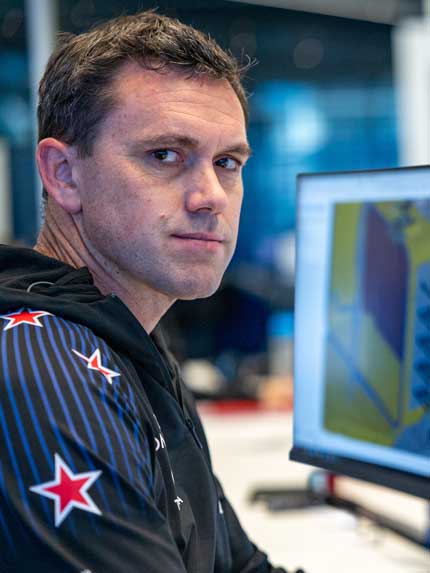 Emirates Team New Zealand designer, Tim Meldrum, is one of the very clever minds behind the innovative and state-of-the-art boat that will race for the 2021 America’s Cup. He shares how technology has revolutionised the sport.

What led you to designing boats?

As a boy, I enjoyed building trolleys with my father in the garage. He was a tinkerer and had the tools available to create things. I grew up sailing dinghies at Sandspit, north of Auckland. Coupled with a fascination for engineering, it seemed natural to progress into mechanical and composite design in the marine industry. I joined Team New Zealand in 2015 at the start of the Bermuda campaign. Becoming part of the team was pretty special; it definitely fulfilled a childhood dream.

Describe the process of designing a winning boat.

There are 25 designers who bring varied specialties: the nuts and bolts guys like me, sail designers, hull designers, hydraulic engineers, naval architects and software developers. I take their weird and wonderful ideas and turn them into functioning shapes. We start with the class rules present in every race which set the boundaries for the field of play. In this case we have to abide by maximum length, beam constraints and formulas, to create the fastest boat within those parameters. The first target is for the hull designer to come up with a shape and then experts will analyse its movement through water.

Can you shed light on what we can expect to see on the new boat?

The AC75 measures 75ft from the tip of the bowsprit to the stern. The hull is 68ft in length and has a 5m beam. Instead of a central fixed keel, it has a T-shaped foil each side on an arm that swings on a pivot rather than sliding up and down like the catamaran boards. It has a single rudder, which also has a lifting wing on it. When deployed, the foils project almost 15m from tip-to-tip across the boat and generate lift once the boat is moving. It requires a lot of force, not only to lift the boat out of the water, but to counteract the sail driving forces, which results in power that is converted to boat speed. The boat will weigh seven tonnes – less than about half of a conventional mono-hull this size. There’s a bigger crew who will revert to grinding in this race rather than cycling. Also the hull shape is not fixed like the AC50 cats, so we can expect some very exciting and no doubt different shapes to emerge from competitors later this year.

How do these new features enhance performance?

The wing sail must now be hoisted, which makes the boat much safer to manage near the dock and avoids the need for a risky crane to lift the wing in and out each time the boat sails. Unlike a conventional single-skin sail, the AC75 will have a large D-section structural rotating mast with two soft sails trailing off each corner and forming a thick wing enveloping an air pocket. A wing is a lot more efficient than a single-skin sail; it has a lot less drag and is a must-have if we want to hit boat speeds of 40-plus knots. The foils will have flaps on the wings underwater. These will function very much like parts of an aeroplane to control the boat’s lift and height above water. It’s essential to get the design of these flaps right, to create the lift force needed to fly the boat with as little drag as possible. The hull needs to meet a lot of performance requirements that at times contradict each other. For example, a slender hull will be good in take-off but will offer very little stability in the non-foiling conditions we expect to race in. We also need to consider crew positioning and how they run around the sails during manoeuvres. These boats put a lot more elements into the pot and we need to make careful decisions on the importance of each area when producing the final shape.

How important is innovation in the competition?

The whole boat is about innovation –without it we would not be competitive. The foil systems and the wing sail system in particular have never been done before at this scale or level of performance. I was heavily involved with designing the previous race’s cycle mechanical systems which made me very innovative in my thinking. A lot of people have asked whether I’m disappointed that we can’t incorporate cycling again and my answer is no. It was amazing that New Zealand made history with that design but the advantage is now over. We have to look for the next new innovation.

How has technology changed the design of boats over the years? Has it come a long way?

It certainly has. In the last 15 years there has been more change than in the previous 150 years. The boats have evolved from fairly slow displacement mono-hulls such as Black Magic, to catamarans, then the foiling cats with wing sails and now into foiling mono-hulls. While a lot of classic design tools and processes have remained relevant, the foiling boats have created the need for fresh, innovative approaches and changed the type of skill sets needed within the team. A good example is aerodynamic modelling. In the past, the focus was mainly about the power created by the sails. Now, we have the boat out of the water more than in it, so we need to think about aerodynamic drag.

Are there any particular innovations that blow you away?

I find the speed at which shape analysis can move really impressive. Wind back the clock 10-odd years and the evaluation of hull shapes and sail shapes was done in tow tanks and wind tunnels, often taking months from concept to result. Now we can do this to a far greater level of detail and precision in high-powered computer clusters that crunch millions of equations in a matter of hours and days. This lets us evolve a faster concept through incremental improvements, at a lower cost. At some point we have to build something tangible though; giving ourselves time to launch and learn how to get the best kind of boat is equally important.

How do you envisage technology influencing the future of the sport?

It’s hard to know how fast technology will move and where it will go, but we are on a steep rate of change right now. I imagine the tools are only going to get faster and more capable. I think we are going to see 3D printing of metals and composite parts become more mainstream. This is significant in my world, as it allows a different approach to design and provides a lot more freedom with organic shapes.