‘The Man Who Sailed The Herald’ was how the newspaper headlined its coverage, illustrated with a shot of David paddling his newsprint dugout on Henderson Creek.

The canoe wasn’t the first that David has crafted in the garage of his parents’ Ōrātia home and it won’t be the last; he’s now working on a 15-foot cedar strip canoe, milled and built from scratch. Among other projects, he has made a wooden bike and constructed a pizza oven using a Swiss exercise ball as a mould; restored old hammers and fashioned a knife from a farrier’s rasp – all uploaded to his YouTube channel as strangely compelling video tutorials. 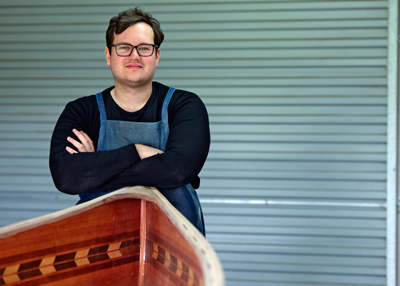 It began around six years ago when he was working as a sound recording engineer and decided he wanted to make a lap steel guitar. He had no real woodworking experience but thought – how hard could it be?

“A lap steel is basically just a plank of wood with some strings on,” says David, who used macrocarpa for the body and consulted YouTube for tips. “I borrowed some tools and set about it. From there I got hooked.”

A six-string Telecaster made from recycled rimu weatherboards followed, then a rimu bass guitar for a friend. Inevitably YouTube’s algorithm realised he was into woodworking and sent him down a “rabbit hole” of video workshops, where he eventually came across a clip of Parks and Recreation actor Nick Offerman building a cedar strip canoe.

It was the cue to build his first cedar canoe – a longer, more capacious vessel than the one he is currently working on – followed by a string of increasingly challenging projects. “My builder brother gives me a few pointers, but the internet has generally taught me everything. I’ve definitely come a long way in my woodworking skills.”

His setup in the garage is “pretty utilitarian,” he says. “My parents have graciously allowed me to fill half of it with my junk. My brother built a workbench, which is fixed against one wall. I’ve put up some shelves and a tool cabinet I built, and some clamp storage. It’s a bit of a mess most of the time.”

You don’t notice it in the videos, which tend to be unvoiced and sped up, months-long projects condensed into ten minutes. David says he made his first YouTube video (on how to construct a wooden bike frame) to give others some guidance. 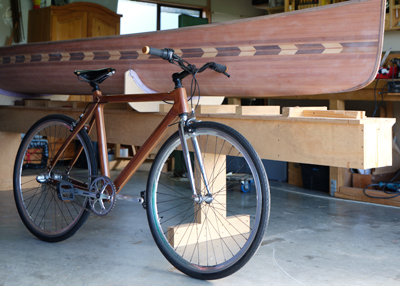 Realising that it would probably struggle to attract viewers, he teased it with a short clip of him restoring a hammer – it drew 400,000 viewers. “It seems like there’s a trend on YouTube of people restoring rusty old things. Axe heads, for example. They love a good axe!”

What’s next on his to-do list? “I’m working on a knife for a friend, then I think my parents want a new dining table, and I probably need a new desk. I also have a dream of making an aluminium guitar.”

The garage in Ōrātia is going to be busy for a while yet.

Reported by Matt Philp for our AA Directions Spring 2020 issue