Like many good ideas, the seed of Hops Rutene’s and Baz Allen’s business venture sprouted over a few drinks in a bar one night in Ponsonby, Auckland.

The pair, whose friendship harks back to school, dreamed up the buzzy notion of Ponsonbees, a mission to keep the dwindling inner-city bee population alive, while educating people on the importance of the small-but-mighty creatures.

And so it came to be. In exchange for a monthly fee, Auckland households are equipped with bees and a hive and, in return, they’re given fresh honey and a pollinated backyard. Experienced beekeepers regularly inspect the hives, carry out general maintenance, monitor the colonies, guide the bees’ flightpath and – the best bit – extract the harvest of liquid gold. The interactive process ignites joy in young and old alike, Hops says. 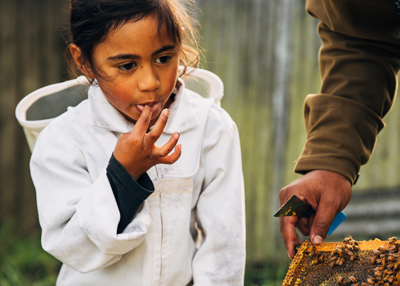 “We visit quite a few young families and supply the children with little beekeeping suits so that they can get involved too,” he says. “They love it; seeing their faces glow is pretty cool and we leave on a bit of a buzz ourselves!”

Hops says many may be surprised to learn that bee populations thrive in central city suburbs because of healthy competition for food, collected from trees in neighbouring leafy suburbs and flowers from parks and private gardens.

But in recent years, population growth and ever-expanding cities, as well as changing weather patterns linked to global warming, have upset the honeybees.

“Trees and plants are now blossoming at different times due to shorter seasons,” Hops says. “Cities are getting bigger, too, which means less bush and fewer flowers for bees to thrive on. So, it feels really good to be doing our part to help the bee population.”

And without the humble bee, humankind is in big trouble.

“If bees were to die, within a few years humans would as well,” Hops says. “Bees are the world’s main source of pollination and if produce isn’t pollinated, it doesn’t grow. We, too, would run out of food.”

Other ways to support the bee population include planting flowering trees and shrubs, and selecting specially-mixed seedlings available at plant shops that grow into nectar-producing bee food. Getting rid of wasp nests also helps bees. Hops says wasps attack bees; he recommends having a professional remove any wasp nests found on your property.