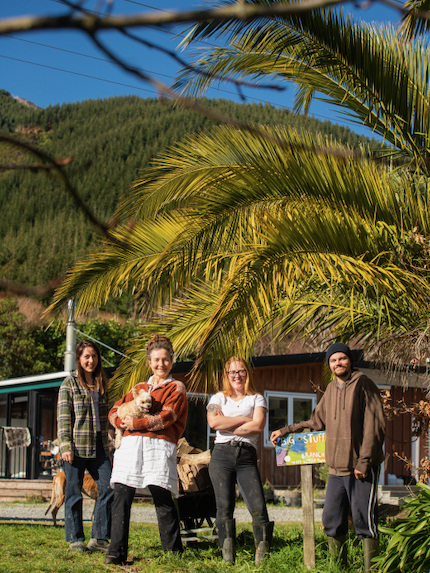 It was a deep-seated desire to establish a safe haven for animals that led Maia Pono to purchase a block of land on the Para Wetlands, north of Blenheim.

What’s evolved as a result, Te Paranui Permaculture Homestead and Animal Sanctuary, offers symbiotic refuge for like-minded souls wanting to live in harmony with nature and contribute to the welfare of creatures, great and small.

Donkeys, alpaca, pigs, miniature horses, sheep, calves, greyhounds and gentle giant Theo the bull – all successfully rehomed at the eight-acre block – now live happily alongside the sanctuary manager, other long-term residents, volunteers and Wwoofers, the occasional bed and breakfast guest and, of course, Maia herself.

Passers-by would be surprised at what lies behind the unassuming gate and colourfully painted letterbox on the highway to Picton. “The Para Wetlands are recognised as one of the most pristine and beautiful in New Zealand,” says Maia, formerly a franchise lawyer, who splits her time between here and her other home five minutes up the road.

“When I found out this plot was for sale I thought it was a paradise, and perfect as it also already had a small house and a couple of sheds.”

A cluster of comfortable dwellings now accommodate what’s evolved into a small eco community. A flourishing and substantial veggie patch – nurtured by strong permaculture principles – helps determine the weekly menus of sharedkai, and a strict ‘no party’ policy helps preserve the tranquillity.

“Our ethos is to include those committed to a plant-based, wholefood diet who’re willing to stick to our values – no meat, dairy, eggs, alcohol, smoking or drugs,” says Maia. “We attract those who fit in with our peaceful and compassionate lifestyle because we’re specific about what we’re here to achieve.”

The creation of the community was quite unintentional though. Originally from Germany, Maia realised after purchasing the block five years ago that the soil quality would need enriching.

That’s when she became interested in permaculture. The project, she recognised, would involve a steep learning curve on her part and take more than one pair of hands. 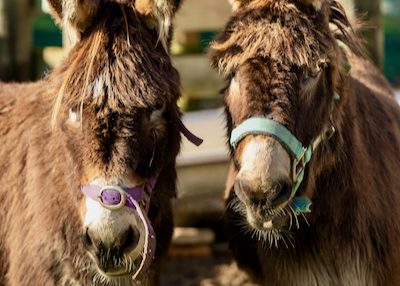 An advertisement for people to help work the land in return for board and lodgings quickly saw her tiny cottage’s second bedroom occupied with her first volunteer, who stayed nine months and helped clear an acre of turf to accommodate a substantial food forest, with nut and fruit trees.

Soon, more accommodation was needed, with the installation of a house bus and re-fit of a sleepout with bunk beds.

“It was a full-time job coordinating so many volunteers, so I appointed a manager who had permaculture experience to oversee everything,” adds Maia. “It became about sharing, inviting people to come and co-create this place; it’s really beautiful.”

Each volunteer works 30 hours a week and tasks vary according to skills and experience, but jobs usually involve gardening, small construction projects, fencing, and of course helping care for the animals. Most of the longer-term residents have jobs outside of Te Paranui, but often also get involved in the projects on site, including growing vegetables and saving seeds. As well as the seasonal supplies the land yields, shopping for other items is done fortnightly by the manager, according to the ingredients needed for tried and tested recipes set out in a booklet. Whoever’s turn it is to cook also leads the karakia.

Te Paranui has now housed over 400 volunteers and 20 long-term residents. Further structures have since been added, including bed and breakfast accommodation, which these days doubles as the rental residences for longterm tenants. Nothing goes to waste; manure from the composting toilets is fertiliser, and repurposed Tetra Pak cartons filled with used plastic wrap have been utilised as insulation for walls.

Also newly built is a modern communal kitchen where tasty tucker is prepared daily by the volunteers for shared meals. This space doubles as a classroom for groups gathering to learn about wholefood, plant-based nutrition at courses run by Maia herself under the banner ‘Earthbound Kitchen.' One of the newly built rooms alongside the original cottage is also set aside for clients at the clinic she operates on site for healing.

All these activities have helped fund the sanctuary, but with Covid impacting income, a new plan has been devised. 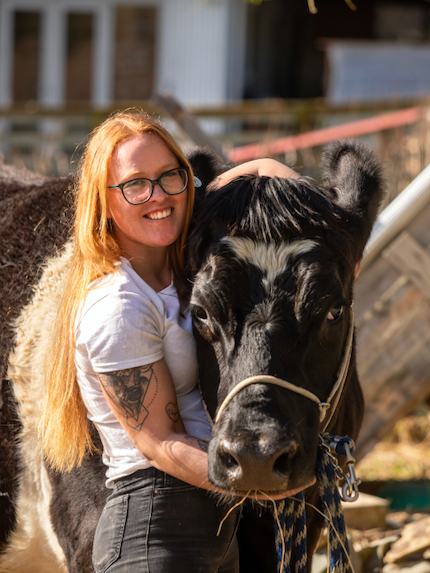 Alex Radford with Theo the bull

“It was always my intention to focus on an animal sanctuary, so now that we’ve laid the foundations it’s time to get on with it in a professional way,” says Maia.

Their mission is to shelter and re-home animals and share their love for them with others. Helping achieve this is long-term resident Alex Radford, who’s recently taken over as Manager and studied animal health and welfare through the Southern Institute of Technology. She first moved in with her husband Asaph as a volunteer three years ago, along with her rescued bobby calves.

“We’ve rescued 62 animals this year,” says Alex, who has already drawn up plans to enable accommodation of more furry friends and a greater numbers of visitors.

“During 2021 it’s been mainly cows, goats, sheep and hens we’ve found homes for, but our plans are to extend that to others like guinea pigs, rabbits, cats and birds.

“People love seeing the stories about the animals, so we’ve created a Facebook page which now has 11,500 followers. It’s very handy for when we hear about animals in need of rehoming, especially when funds have to be raised quickly.”

Adopting two former racing greyhounds led Maia to fall in love with the breed and together with some of the volunteers she built a 100-metre fully fenced strip for the energetic powerhouses to exercise. She also set up Hounds4Life which has helped rehome over 100 greyhounds retired from racing, providing a foster home in the interim.

“Our new plan involves building extra shelters and enclosures and making sure the whole sanctuary is suitable for visitors. We’ll then open up even more for community events and kids’ birthday parties.

"Some people tell me their experience here has helped turn their lives around. I guess for some this is actually like a sanctuary for them too.”

Reported by Fiona Terry for our AA Directions Spring 2021 issue