A fine-tuned lens in India

Monica Tischler is captivated by the colours of Northern India.

There’s a Sanskrit term – ‘darshana’ – which means the lens through which you view yourself and the world. There is good in life; there is also bad. What do you choose to see?

The Hindu phrase is brought to the forefront of my mind as chaotic scenes of India spill out ahead. The sun is intense as I weave through a mass of bodies. Brown chai tea bubbles in big aluminium pots over live flames on the roadside; poppadums sizzle in oily woks. There are smells I don’t recognise. I sidestep sleeping dogs on cracked, uneven pavement like I’m dodging landmines. Two men and two bleating goats atop a scooter zoom past. Up ahead, a buffalo trots nonchalantly through the masses. A camel holds composure in the middle of a busy intersection. It’s said the world was once black and white until God created India.

My attention is a sought-after prize – everyone vying for it. Beautiful women with dark eyes, tattered saris and crying babies attached to their hips tap my pale skin. They move a dirty hand up to a hungry mouth. "Food, please ma’m," they beg. They shove an empty baby bottle into my ribs. "Milk, please ma’m."

What do I choose to see?

Mobile phones are thrust in my face. "Selfie, ma’m? Just one – please."

Tuk tuks line up beside me. "Ride, ma’m? Where you going?" The honking of car horns is a never-ending ringing in my ears. 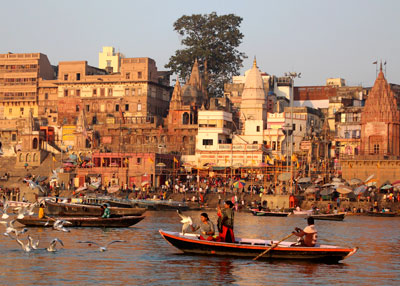 The sea of chaos parts like a rip in the ocean. Just as abruptly and unpredictably as changing tides, I stand in front of Varanasi’s famous body of water: the Ganges. Stepping down the riverfront steps – known as ghats – and into an old, wooden dinghy, the water provides refuge and a sense of calm.

Mantras chanted from the Aarti ceremony on the river’s edge echo through the still air and the spiritual sounds prick the hairs on the back of my neck. I’m part of a tour with Exodus Travels. Our guide, Gaj, says we can’t change this 5000-year-old city – one of the oldest in the world – in just two days, so let’s be a part of it. I surrender. Along the ghats, Hindu priests circle fire lamps and offer flowers, milk and floating lanterns into the water, while chanting songs to the Goddess Mother Ganga. It’s believed that when the ritual is complete, she showers her blessings onto those present that night.

The flickering flames of tea light candles twinkle on the river’s rippling surface like beaming headlights on a busy highway. Taking part in the wish ceremony held here, I place a candle into the holy water and follow its glow as it floats downstream. It joins the scatterings of other wishes made by locals, pilgrims and fellow travellers; the night air awash with the deepest desires from across the globe. Would I change Varanasi, even if I could?

Strokes of the boat’s oars gently push us toward the Burning Ghats where traditional cremation ceremonies take place. There’s one guarantee in life: it’s not infinite. Before me lies sobering proof.

A fluorescent, perfect sphere of fire lights up the sky in the most magical sunrise the following morning. Evidence that, for the lucky ones, there is always another day.

Earlier, the overnight sleeper train had rattled its way to Varanasi from Agra. Darkness dropped over the station like a thick velvet curtain revealing a blood orange moon. The deafening shrieks of pigeons roosting on the tangle of overhead wires subsided as the sun dipped, only to fire up again in raucous unison with the arrival and departure of each clattering train.

With my train delayed, it became a form of entertainment to watch rats scamper along the skirting boards as I sat in the ‘first class’ waiting room. I’d leap off my seat as they scurried behind me, afraid of bitten ankles.

What do I choose to see?

It was after midnight when the train broke away from the platform. I assumed designated position on the top bunk, finding little privacy behind the thin curtain separating me from a mother and two infants sharing the bed below and the hundreds of sleeping bodies lining the corridors like canned sardines. 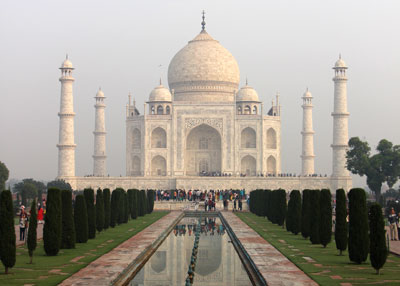 "Chai! You want chai?" A man selling cups of tea paces the passageway.
I was jolted awake with sharp, sudden movements as the train pushed through its eight-hour journey. I clutched my belongings closer to my chest.

A current of vulnerability took hold. Fighting the unfamiliar only worsens a situation so I eased into the bumpy ride. The movement soon lulled me to sleep.

I dreamt of what the sights Agra, home of the impressive Taj Mahal, had shown me earlier. I woke before sunrise to view the white marble mausoleum constructed by Mughal emperor Shah Jahan for his favourite wife, Mumtaz Mahal. From a quiet spot under a tree, I watched the structure take on different hues with the rising sun.

Learning of India’s rich history is like becoming ensconced in a fantasy novel. I was excited to hear of tales behind the red sandstone walls of Agra Fort, built by Emperor Akbar and completed by his grandson, Shah Jahan. While beautiful and intricately detailed, there’s a dark and dramatic history here complete with accounts of crocodiles once residing in the palace moat as the first line of defence against attackers.

Shah Jahan was imprisoned in the fort before his death. He would gaze out at the nearby Taj Mahal, the tomb of his beloved wife. When he died, his body was taken by boat to be laid to rest next to his love.

Around every corner in India is a story to be told; another piece of its history kept alive. The Pink City of Jaipur intrigues.
In the 1800s, the shop facades and surrounds were painted terracotta by the Maharaja to welcome England’s Prince Albert during his tour of India. The City Palace, Maharaja’s former home, is now a treasure trove of stories.

Bushes of magenta and orange bougainvillea spill out on the roadside like popping fire crackers. The Exodus tour bus pulled us away from urban bustle; the city’s chaos replaced by fields of grapeseed and guava tree orchards. Men wore white cotton shirts to keep cool in the humidity but experimented with colour atop their heads, wrapping themselves in bright turbans. The slender figures of women were draped in cobalt blue, purple and yellow saris. Traditionally, the area was prone to low rainfall so wearing bold clothing was a way for locals to bring vibrancy and life to dry and barren surroundings. Thanks to irrigation systems, the area is now a subtropical desert rainforest – a good climate for tigers – but the vivacious dress code remains.

Two perfect, giant paw prints embedded in the dusty dirt came first. We were on the right track. Safely on board a 4WD in the heart of Ranthambore National Park, we had an important agenda: spotting India’s elusive tiger. But the rainforest, alive and thriving with exotic creatures provided so much more. Lethargic sloth bears plucked leaves from low-hanging branches; a crocodile basked in a patch of pale late-afternoon light; deer stuck together in herds; India’s national bird, the peacock, gallantly showcased its impressive colours. Inching toward higher ground, binoculars pointed to a gap in grasslands, we all gasped in awe: two tiger cubs!

There is good in life; there is bad. The contrasts are stark and confronting in India. There is rich beauty in the landscape, people and history, yet there is such devastation in the poverty and lack of education. With my darshana fine-tuned, I left the country with an understanding that beauty overrides darkness.

Reported by Monica Tischler for our AA Directions Autumn 2019 issue

The writer travelled on a Highlights of Northern India tour, courtesy of Exodus Travels