Kathryn Webster takes a fresh look at a familiar city – as a tourist for a day in Wellington.

Sitting outside Te Papa Tongarewa with coffees, we plan the day and indulge in some people watching.

This is the ideal spot. The waterfront is buzzing with a happy throng of wanderers, skaters, scooters, running children out in the sun. Wellington has put on one of its best blue, still days. Earlier, we’d driven to Porirua to visit Pātaka Art + Museum to an exhibition commemorating 250 years since Captain Cook arrived in Aotearoa. It was a riveting show, thought-provoking and inclusive, with the energy of several artists combined to good effect.

Pātaka is a beautiful public space, with changing shows and an extremely tempting shop specialising in original ceramics, jewellery and artist prints. We talk about the richness of Wellington’s art scene as we walk from Te Papa to the City Gallery, Wellington’s main public gallery, and always worth a visit. Today it features challenging, stimulating international art and, upstairs, a retrospective of a New Zealand artist. 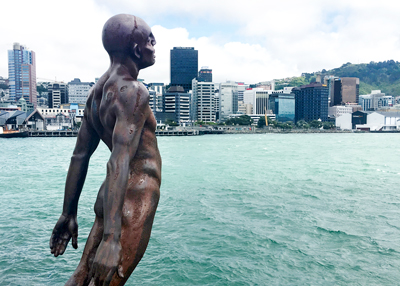 Out in the sunshine again, we turn toward the harbour where the special character of Para Matchett’s City to Sea Bridge welcomes walkers with its craggy, woody beauty. We meander along the waterfront to Wellington Museum, where the story of the city is told, with an emphasis on its marine life and culture.

The second-oldest building on Wellington’s waterfront, the museum was originally the Wellington Harbour Board Head Office and Bond Store. This is honoured in the first part of the experience, with a recreation of the bond store complete with barrels, crates, ropes and the sounds of a busy wharf; distant voices, creaking timbers and a cat’s cry.

We wander through to another massive hall where the years 1900-2000 are represented, each with a story told through photographs, artefacts and panels, such as the public library opening in 1902, the Tip Top Milk Bar in Manners Mall in 1935, 1977 when Carmen stood for mayor and, in 1996, the fibre optic cable arriving in downtown Wellington. It’s totally compelling.

We climb a magnificent rimu staircase to an exhibit dedicated to the Wahine disaster, with detritus from the wreck, news coverage, photographs and a poignant list of those lost. Back out on the wharf, we look at the clear sky and wonder about the weather and how a harbour such as this can change so radically, so dramatically.

At this point in the day we get distracted, briefly, by the capital’s excellent shopping – but not for long because we have somewhere to be. The Alexander Turnbull Library on Molesworth Street. We are here to see He Tohu, a display of the three founding documents of New Zealand: the Declaration of Independence, the Treaty of Waitangi and the 1893 Women’s Suffrage Petition. These are the originals, displayed in darkened cave-like room with special lighting arrangements allowing us to see them just briefly; just enough to know they’re the real thing. 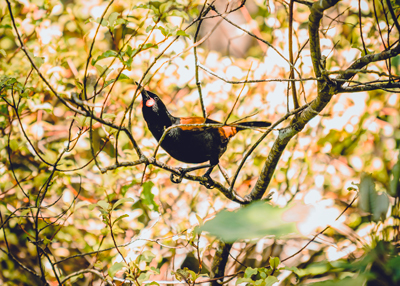 The Women’s Suffrage Petition is on a long roll; pages 256, 257 and 258 are showing today. They roll it around every three months to three other pages, to avoid overexposure. I feel a swell of pride as I know two of my ancestors’ signatures are on that petition.

The Library hosts temporary exhibitions, too, and we luck in with Pūkana! Moments in Māori Performance, with wonderful items, imagery and stories focusing on Māori actors, dancers, cultural performers and musicians, from George Henare and Dame Kiri Te Kanawa to Tina Cross and Marlon Williams.

Over the road at the Beehive we find we’d have to take a guided tour to see inside the parliament buildings and our timing isn’t right. We have to stick to our plan: we’re off to Zealandia. We head to the cable car on Lambton Quay and, feeling like time travellers, ride into the hills above the city. We’d left our car up there; if we hadn’t we could have jumped on a shuttle bus to Zealandia but as it was, we took the short drive.

Zealandia is a 225-hectare wildlife sanctuary with a predator-proof fence around a lake, with easy tracks around the edge of the water, across the top of a dam and up into the bush. It’s spectacularly beautiful, filled with bird song and stories of healthy wildlife residents – and it’s only moments from downtown Wellington. This is such a treasure.

The day is drawing to a close and there is one more essential on the tourist route: a visit to Wellington Zoo. The problem is that on such a warm, sunny day, most of the zoo’s inhabitants are snoozing in the shade. Only the red pandas, meerkats and giraffes deign to show themselves.

As we head back into the city, we ponder the many dining options available and decide vaguely on Cuba Street. We’ll find a park and wander. But first, we drive the winding road up Mount Victoria to the lookout above the harbour and join other tourists admiring the view. Locals are here, too, many having walked up. From here, we can see across the city, up the harbour to the Hutt Valley, out toward the South Island. It’s a pretty city, cloaked in green and edged with sparkling blue. It’s enticing and fascinating; I would happily spend more time here.

Elisabeth Easther powers around the capital.

Flying into Wellington on a still day, the harbour is a sheet of blue-grey silk. It’s rare to see the capital so calm and, while it’s not balmy, the plan to enjoy Wellington from the saddle of an e-bike will be infinitely more enjoyable without wind.

Operating out of a shipping container on Queens Wharf, Switched on Bikes is a switched on business with owner-operator Ryan O’Connell renting out bikes and leading guided tours. A fit and capable cyclist, Ryan is also an enthusiastic advocate for the electric bicycle, seeing it as the ideal mode of transport for unlocking Wellington’s undulating charms.

“Electric bikes are the best,” says Ryan. “They're fun, easy to ride and you can reach the top of Wellington's hills without breaking a sweat.”

Following the mandatory safety briefing, we saddle up and whizz to the forecourt of Te Papa Tongarewa where we stop to admire the nearby eight-metre-high, architecturally designed diving platform.

On a chilly Thursday afternoon, it’s no surprise that no one’s leaping into the freezing water, but we do enjoy hearing the story of the platform’s genesis. When daring divers first began climbing to the roof of the Free Ambulance building to jump into the sea, instead of putting up a sign saying ‘No Diving!’ or erecting a fence, council commissioned an elegant piece of urban design, an act that says a lot about Wellington’s accommodating attitude.

Continuing towards Oriental Bay, Ryan reveals works of art and points of interest. Curiously, Wellington’s inner harbour has no natural beaches and the pleasant crescent of sand on Oriental Parade was originally barged in from Golden Bay. Over time, the small Golden Bay grains washed away and so the beach was subsequently topped up with new sand, 90 containers of heavier stuff from Dunedin which is less likely to be carried away.

On we go past various sweet bays, Little Karaka, Balaena, Weka and Kia, past the Evans Bay wind wand (Phil Price’s Zephyrometer) which, with no wind, was rendered utterly static, so quite the novelty. Past the higgledy-piggledy Wellywood sign we went and eventually we’re pedalling through a cluster of ramshackle buildings, arriving at the Chocolate Fish Café. In summer this popular joint is a hive of activity but not today, so we opt not to stop, and besides, we have bigger scenic fish to fry.

Continuing back the way we came, keen to conquer Mt Victoria before the sun packs up for the day, at Cog Park we head for the hills. Up, up, up we ride, admiring the precariously perching houses as we go. I love Wellington’s domestic architecture. Reaching the summit on sunset, the pretty city lights up for the night, and the Oriental Bay fountain obligingly spouts, as if on cue. We're 196m above sea level and, as promised, not a bead of sweat upon our brows.

Reluctantly we return to the harbour, rolling through Roseneath and along Oriental Parade, back to base. What a capital adventure and the perfect way to experience Wellington’s fabulous variety of charms.