A trip from Auckland to Raglan proves an easy escape for Kathryn Webster.

It was a vague idea kicked into gear by a hard Friday. Let’s get out of town. Let’s just go.

We left Auckland after the traffic had cooled down – took the new tunnel to the southern motorway – and two hours later we were in Raglan. In the busy season it mightn’t have worked, but we lucked in with vacancies and by 11pm we were ensconced in a motel in the middle of town. Waking in a new place was exactly what we needed.

Raglan is a town to wander and after a leisurely breakfast at The Shack, on the main drag, we wandered: between craft, art and vintage shops, weighing ourselves down with gifts, second-hand books and jars of local honey.

It’s known for its creative buzz, this town. Many people make a living from making and the town supports it well with community galleries and markets.

Down at the wharf, a long walk or a short drive from the centre of Raglan, a flurry of productive energy was attracting visitors. There, we found a vintage shop specialising in 50’s and 60’s furniture, art, ornaments and classic vinyl. A chrome lamp, a formica-top coffee table, a set of stylish cups: I would happily have bought it all. Next door, hand-made leather shoes, sandals and bags seemed to be flying out the door – but the winner of impressive sales was probably Tony Sly Pottery, where a steady flow of happy shoppers left with intriguing packages. His shiny ochre, green and cream glazed jugs, platters and bowls were too tempting; I added to my laden bag.

Also on the wharf was Rick Youmans, marine artist in oil and watercolour paints and designer of genius presentation cases. As we talked, his eye wandered to beyond the wharf where a handful of yachts swung in the tide. How do you manage to sail in this harbour? He said he avoids going over the tricky bar, but there is plenty of upper harbour to explore.

Sea birds swept overhead. A quiet steady flow of water sparkled in the afternoon sun. Across the harbour, intensely green farmland stretched away interspersed with valleys and pockets of bush. 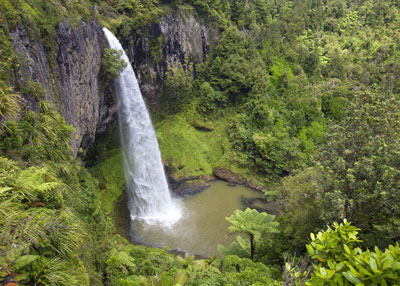 We drove down the coast to rocky little bays Manu and Whale. The waves were dotted with black-sheathed bodies lying on boards, waiting for mysterious signs. We watched from the rocks. Others did, too, and discussed the colour of the sky, the movement of the tide and the shape of the beach. We noticed many accents and foreign languages spoken.

It confirmed what we’d been told, that because of the good surf, Raglan is an international town. Young travellers come here for the spectacular left-hand breaks and long rides and so there is more diversity found here than most towns its size. Variety and youth; no wonder there is creative energy here.

One of the travellers recommended the coast road south of Raglan, suggesting we circle the mountain. He was anxious that we didn’t have GPS and being out of mobile range we wouldn’t be able to Google our way…which made me smile. We had a map. The road we took was a bit hairy – I was glad we’d hired a 4WD, though we passed other cars that weren’t and they were coping, just going even slower over the ruts and corrugations. But like many winding coastal roads, it was worth the rough ride for the wonderful views. Rugged farmland stretched toward cliff drops, sun-tipped wrinkled sea stretched to the horizon. Inland, paddocks sloped toward the bush-covered Mt Karioi which hid its head in cloud.

We came to a gorge and the road dipped and swung past steep outcrops, massive trees towering overhead, their feet hidden in sharp-sided valleys and pockets of dark wild bush.

Down a side road, we parked and walked a short sandy path to lonely Ruapuke Beach. Dramatic and powerful, it did us a load of good to walk its length taking deep mouthfuls of wind.

Further along the road, a campground caught our eye. We drove, past a dam with a diving plank, into a shallow valley within walking distance but not within view of the
beach. The resident manager welcomed us, showed us the communal kitchen and a basic, cosy cabin, and if we’d had linen and food, we could have stayed.

The light was fading and we had a goal, so we kept on, through Te Mata to a road leading to Bridal Veil Falls. A pretty forest path alongside a deep, fast-moving stream led us to the top of the falls. After recent rain the falls were mighty and thunderous. Further along the path, another lookout provided an excellent viewpoint from which to be truly impressed.

There wasn’t enough of the day left to walk to the bottom.

Back in Raglan, we checked into a waterfront studio with windows overlooking the harbour and a footbridge which demanded an early morning walk. Locals with their dogs, visitors like us clutching cups of takeout coffees, families heading for the playground in Kopua Domain – it was a classic Sunday scene.

Before leaving town, we had a seriously good breakfast at the Raglan Social Club, enjoying the sun at a footpath table, falling into easy conversations with passers-by.

On the way east we found Ohautira Road and took that, driving up a finger of the harbour, past steep rough farms. Valleys crumpled and cut into the distance, rugged little roads disappeared into folds in the landscape. It was interesting territory, hinting at mysteries and intrigue.

Waingaro Hot Springs, just beyond a faded hotel perched on a hill, was bristling with business. Squeals and laughter and the scent of barbecues cooking wafted out over the road.

We popped out into the backyard of Huntly and it felt like we were back in civilisation, back in the soup, with the Waikato Expressway soon scooping us up and delivering us to the city.

Back to the busyness, but refreshed and replenished and ready to deal with another week.

Reported by Kathryn Webster for our AA Directions Summer 2017 issue

Small art galleries and craft shops are a feature of Raglan, including Matapihi Gallery, Jet Collective and Show Off, all on Bow St, and Kanuka Design Gallery on Wainui Rd. Raglan’s Old School Arts Centre, on Stewart Street, hosts exhibitions, workshops and markets.

There are plenty of bush walking tracks close to Raglan, including to the summit of Mt Karioi. Surfing is a big deal in Raglan. As well as the famous Manu and Whale Bays that attract experienced surfers, Ngarunui Beach is safe for beginners. Several surf schools operate in the area and hiring equipment is easy, too.

Soundsplash Festival, an eco- conscious, family-friendly weekend of music, workshops and fun, is on at Wainui Reserve from January 19 to 21. The site is five minutes’ drive from Raglan; camping there is an option and regular shuttle buses will connect the venue with Raglan township.

Thank you, AA Thrifty Car Rental. AA Members can save up to 30% off their next hire by booking exclusive, all-inclusive rental rates; see aa.co.nz/carrental or phone 0508 73 70 70