A winter journey from Napier to Whanganui

I begin my road trip on two wheels, not four, cycling Napier’s flat, sunny waterfront. There are lots of straight lines here – the cycle path, the horizon, the shoreline on a windless day.

My hired bike is fitted with a high-tech motor, so pedalling is a breeze but my hands are stiff with cold. It’s warmer when I head into the sunshine, squinting and smiling at the shadowy figures I pass in the brightness. 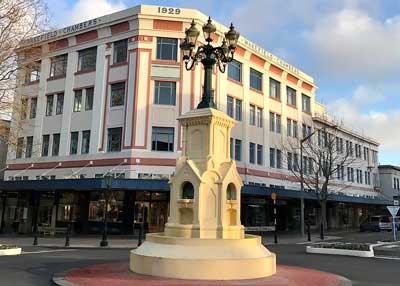 At the bottom of Bluff Hill’s steep cliffs, Napier Port is loud and busy. Huge piles of trees are transitioning to timber; forklifts, trucks and enormous ships swapping loads of goods, inbound and outbound.

Eventually, on four wheels, I head down the straight seaside road – ocean on one side, pastel buildings on the other – and it feels almost Californian. Palm Springs without the palms.

I drive through cute Clive. A couple of rowers scull on the still river, skimming a mirror. This is fruit bowl territory, the land of summer abundance. Signs advertise flowers for sale and freshly picked cherries, but not at this time of year. Now, the trees are skeletal, dormant.

The countryside grows bigger as I drive south. Saturated flats swarm with swans; steep green hills in the distance.

Waipawa, in Central Hawke’s Bay, was established in 1860, making it the regions’s oldest inland settlement. On the outskirts of town, a giant ball of yarn stabbed with knitting needles catches my eye. It’s an outdoor sculpture nestled in the grass of Artmosphere Gallery.

I sidestep a Dachshund to venture inside, warm from a log fire and brimming with paintings, jewellery, sculptures and whimsical creatures built from cutlery. This is Sally Maguire’s home and business – her large paintings of scarecrows, cows and moody clouds sit alongside her partner Helmut Hirler’s dramatic black and white photography. 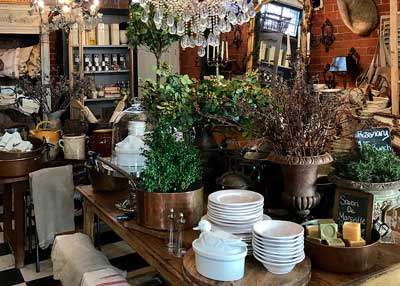 Sally encourages me to visit the goat in the neighbouring paddock. It bleats excitedly as I approach, hooking its hooves into the wire fence to stretch up so I can scratch its hard forehead.

I cross two milky blue rivers to get to Waipukurau, pregnant with winter rain and lined with stark orange trees. The Ruahine Ranges, frosted with snow, loom in the distance.

Somewhere along the way I’ve lost my sunglasses so I stop in Waipukurau to buy a new pair. Along the main street, store windows are studded with mannequins wearing camo polar fleece, rugby shirts and dense, prickly-looking knitwear.

There’s a blue line running through the town, literally marking the 40º parallel. Waipukurau is the only town in the world that the degree of latitude passes through; the only countries being Chile, Argentina and New Zealand.

It marks the start of the ‘roaring forties’ – prevailing westerly gales – though they’re not blowing today.

Grey rain streaks the horizon as if a careless painter has smudged their fresh work. Inside my warm car I sip coffee and tap a finger to the beat of my music. Outside, a farmer squints into a passing shower. Muddy dogs with wagging tails huddle next to him on the quad bike.

The landscape changes abruptly as I cross the regional boundary between Hawke’s Bay and Tararua. Hills become greener, closer.Trees are no longer winter-bare poplars, but prickly green conifers.

At the foothills of the Ruahines, signs warn me that Saddle Road, the beleaguered alternative to the now defunct Manawatū Gorge, is also closed today. This means detouring further south. I pass the Tui brewery in Mangatainoka, its iconic tower incongruous against flat farmland. 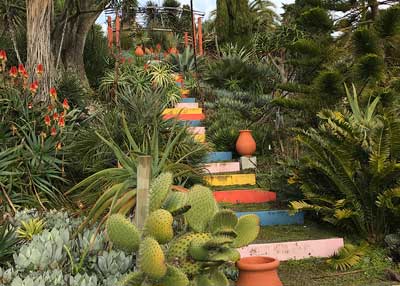 In Pahiatua the bright yellow Harvard, now a children’s playground rather than a fighter plane, welcomes me. The back country landscape here is North Island hinterland painted from memory: all of the greens in the palette, damp earth, rumpled hills and scrubby trees.

In Palmerston North I take a lap of the square to stretch my legs, ducking through the acute angles of architecture by the public library to discover George Street, colourful with murals and secondhand designer clothes. On another side, yoga and life coaching studios sit adjacent to tattoo parlours and haberdashery shops.

Bulls is the punniest town in New Zealand, though alongside ‘laugh-a-Bull’ wordplay there is also a disproportionate number of homeware and antique stores. I pause and watch as a thunderous helicopter passes overhead to the nearby Ohakea Air Force base. Back on the road I pass multiple convoys of chunky army trucks heading in the same direction.

The road towards Whanganui is lined with clipped, golf-course green, almost lurid through my new sunglasses. There are no big hills here.Instead, deep valleys are carved out of a flat plateau. Afternoon sunlight gilds everything. Woolly sheep are silhouetted with glowing halos.

I take a detour off the main highway to visit Paloma Gardens, just outside the tiny settlement of Fordell. The home of Nikki and Clive Higgie and their two Dachshunds – Pablo and Claude – is a testament to creative passion and patience. Nicki and Clive began their epic landscaping project not long after they got married – 44 years ago.

Exotic palms grown from seed now tower over their house; thick stands of bamboo provide an ideal backdrop for wedding photos or Instagram selfies. While not so photogenic, the Garden of Death is a fascinating spot. Everything within the walled off area is either a stimulant, an irritant, or potentially lethal. I keep my hands in my pockets.

We wander along mossy paths, across manicured lawns and pause to reflect by an expansive pond that the Higgies dug out deep enough to dive from the nearby bridge in summer.

Whanganui is looking its best in the pastel dusk as I drive into town. Headlights and streetlights are reflected in the expansive dark waters of the river, heritage buildings are backlit by the west coast sunset and the shimmering disc of a nearly-full moon floats above it all. 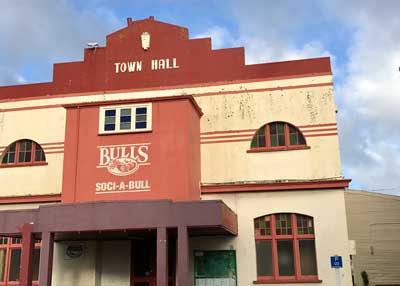 A waft of warm, beery air greets me at the Rutland Arms Inn, as it has no doubt greeted countless other travellers over the last 170 years.

With a history chequered by multiple fires, earthquakes, renovations and very nearly demolition, the iconic Rutland is a stalwart of Whanganui; a rejuvenated symbol of the city’s heritage and tenacity.

It seems a good place to stop a while and plan my journey back the way I’ve come.

Reported by Jo Percival for our AA Directions Winter 2019 issue

Go to AA Traveller for other ideas on what to do in Whanganui. From Must-Do’s to hidden gems, follow AA Traveller on Instagram for a daily dose of New Zealand travel inspiration. Tag @aatraveller for a chance to be featured.