We’d been briefed not to get close to the seals. Luckily for us, they don’t play by the same rules.

There we were, kayaking off the Abel Tasman coastline, me trying to scotch my fears of open water, when suddenly up popped a flipper, a nose and long dripping whiskers.

Its puppy eyes were enough to take my mind off the depth of the water; the fur seal seemingly curious of those sharing its space. It swam for a while between our vessels before venturing off, arcing above the water in a final flourish.

We were exploring the Abel Tasman National Park, combining walking the path with kayaking some of this fabulous shoreline for a best-of-both-worlds experience with Wilsons.

Our adventure had begun the previous day as we’d climbed aboard the Vista Cruise catamaran at Kaiteriteri, the boaties’ southern gateway to the park. We powered past beautiful golden sand beaches, some deserted, others dotted with colourful parasols.

At Tōtaranui, to the north, we disembarked to begin our three-day tramp under the watchful eye of experienced guide Rewa Glasgow.

We skirted the edge of the Department of Conservation campsite and followed the track into the native bush for the first of our climbs.

White petals carried on the warm breeze from the lofty kānuka snowed down as we wound our way up the dirt path. Compensation for the climb came quickly, with spectacular views back towards the beach, and opportunities to catch our breath whenever Rewa paused to share nuggets of knowledge about the park.

We passed through cool gullies with giant rātā that had grown over hundreds of years from their origins as piggybacking epiphytes, and tall nīkau giving a tropical feel to an otherwise temperate forest.

Among our group was 15-month-old Enzo, carried in a backpack by mum and dad from Colorado; his grandmother and uncle also in the party. He would sometimes serenade our endeavours, much to the delight of those nearby.

The path was well-made and easy to follow, with our afternoon’s walk ending with a descent into Pound Gully, where weka were fishing for crabs, and a barge waited to transport us across the inlet to Meadowbank Homestead at Awaroa.

With neat lawns and giant pōhutukawa out front, rosebushes, camelia and rhododendron out back, and a homely cottage-feel inside, it’s one of the two dreamy beachfront properties owned by the Wilson family business which currently involves three generations. The property has roots dating back to 1884, when their forebears built the original cottage to capture the stunning view. Rebuilt in 1994, the current replica retains its cosy feel, providing mod-cons while embracing its history through photos and stories of the many generations. 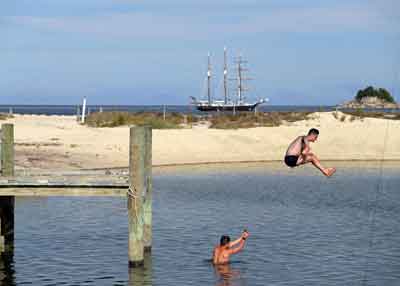 En-suite showers, comfy beds and fluffy white towels are just some of the perks of exploring the park this way. Delicious three course meals are another, and after finishing a sociable dinner around the giant farmhouse-style table, we gathered in the lounge to learn more about the park, the family, and our walk the next day. As we headed back to our rooms stargazing took on a whole new appeal, with the Milky Way clearer than ever.

The next morning, after a hearty homecooked breakfast and collecting lunch from the extensive spread, we set off along the beach, admiring a view that thousands of members of the public raised funds to purchase via a Givealittle campaign in 2016.

The heat quickly set in and we were grateful for the shade as the track skirted inland, tree ferns providing our parasol. At times we’d all walk together, the chatter a pleasant distraction from tired legs, but sometimes we’d spread out, almost walking independently.

Every now and then we’d pass trampers heading in the opposite direction, some with backpacks loaded for their multi-day tramp.

Thankfully our overnight luggage had been taken care of courtesy of the baggage transfers, leaving only day packs for us to carry.

It was mid-morning by the time we descended to Onetahuti Beach, where the three-masted barquentine Spirit of New Zealand was spectacularly moored off Tonga Island.

Fleet footed oystercatchers tip-toed their way along the water’s edge in search of food. Waiting for us with kayaks at the far end of the kilometre-long beach was Caleb, our guide for this waterborne-leg of our adventure, which would see us paddling to our overnight stop at Torrent Bay. He gave us a run-down on techniques and safety before we headed out into the shimmering turquoise. Sheltered by the lush, bush-clad hills surrounding the bay, the water was so clear we watched fish dart past and could clearly see the shells on the seabed – over a paddle’s depth below.

Initially our route hugged the coastline, giving a wonderful perspective of the national park, the tall kānuka rising from the cliffs, interspersed with skyward ferns and beech.

It wasn’t long before we passed a favourite hang-out spot for New Zealand fur seals, pausing to watch a couple basking on rocks. Their numbers have grown considerably in this area, aided by the marine reserve established here in 1993. With our paddles resting and peace prevailing, it was thrilling to be at their level; to hear the snorts and calls, and know that at any moment, one might appear alongside.

We headed along the coast, diverting up Falls River, negotiating a narrow, fast-flowing channel to explore the sheltered creek. At its head was a magnificent swing bridge – the longest and highest in the park. We arrived in time to encounter the rest of our group – who’d opted to keep walking this section of the park – as they crossed.

Charlie, our 12-year-old, picked out flakes of ‘gold’ from the granity riverbed for further investigation later on.

By the time we’d returned to the open ocean, the wind had picked up, but under the reassuring guidance of Caleb, we made it out to Pinnacle Island, a kilometre off-shore, where more seals were resting. From there he revealed a plan to speed us back – making use of the brisk wind’s power by rafting up and setting a sail between our paddles. It was exhilarating, to say the least, racing towards and into Torrent Bay.

There’d just been time for a quick swim before heading for dinner. Originally the Wilson family bach, Torrent Bay Lodge has been extended and upgraded many times since it was first built in the 1960s, but retains many home comforts, including historic photos, a cosy fire for winter evenings and sundeck for warmer months.

Our spirits were far from dampened by the next morning’s drizzle. As we headed out of Torrent Bay the wide sandy track was lined with mānuka and kānuka, hiding baches from our curious gaze.

Having Rewa on hand meant that gems we might otherwise have skipped past did not go unnoticed, including the penguin’s burrow, complete with a fluffy little blue; the rare horned orchid, flowering on the side of the path and the ancient kūmara pit, evidence of early settlers here. She was able to swiftly make alternative plans for one of our party who developed knee problems and taught those unfamiliar with the flora about the honeydew of the beech trees’ scale insects.

The droplets, she said, are irresistible to waxeyes and tūī – good news, as birdlife is on the rise in the park thanks to Project Janszoon’s intensive predator control programme.

At Apple Tree Bay, Rewa whipped up hot drinks with her billy while the children swam and we adults watched two black-backed gulls wrestling over three fluffy chicks hiding in the grasses.

We were soaking by the time we neared the end of the track but savouring the last section as we crossed the long boardwalks and bridges towards Mārahau, sand primula defying the salty elements to decorate the scene with their tiny white flowers. Behind us, the clouds were creeping over the hills as we reached the intricate carvings of the newly unveiled waharoa, gateway to the national park.

Commemorating details of the ancestral migrations of the four iwi which came to settle in the region, including the trials and tribulations of their journeys, we paused here to reflect and take photos. It was a fitting end to our own, albeit much shorter, journey.

Reported by Fiona Terry for our AA Directions Summer 2019 issue

Thanks to Wilsons Abel Tasman

Go to AA Traveller for more stories about this region.