The city was still rousing from slumber when we wound our way to Dansey Road Scenic Reserve in the still, navy blue haze of dawn.

White wisps of geothermal steam puffing out from roadside grates and drains were the only sign of movement.

Soon, we were fully awakened by a blast of fresh air, flying high above a canopy of native trees with a light drizzle of rain osculating our rosy cheeks.

It was a mystical and euphoric journey. I looked down at burgeoning ponga ferns, open like big, bright green frisbees. By lifting my gaze skyward, it felt as if I could reach up and touch the tops of the trees, where daylight kissed the ends of shaggy branches and stag horn ferns and native orchids piggybacked onto the ancient and weathered bark of rimu. 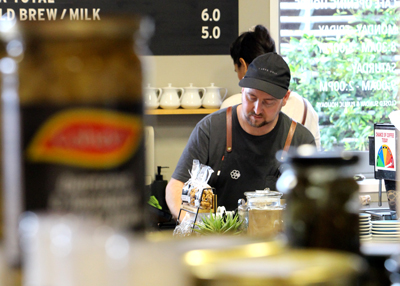 Afterwards, energised by nature, we were nonetheless in need of coffee. Back in the city we found refuge in the warmth of Vetro, a delightful Mediterranean gourmet grocery store where locally roasted Revolver Espresso has set up shop in a corner. While ordering our brews I chatted to the owner and barista about his efforts to expand the brand to other artisan independents and retailers.

We left laden with bags of coffee beans and other goodies to enjoy back at our motel. On the way back we were distracted by alluring shops, like ahu boutique, where owner and designer Adrienne Whitewood showcases beautiful garments inspired by Māori art and culture. Sewing was a skill passed down from her kuia and she’s taken it far, showing her collections at New Zealand Fashion Week and dedicating a career to growing high-end contemporary Māori design in Rotorua.

In gallery Art United, we spoke to the owner about how he signed the building lease for his new venture just prior to the nationwide lockdown. The gallery displays the photography and paintings of his mother and brother-in-law respectively; it was heart-warming hearing him share his dreams and aspirations for the business, albeit in trying times.

As darkness fell, a thick mist began to envelope the emerald green slopes of Mount Ngongotahā. We could catch only glimpses of the gondolas ascending the mountain’s edge and the faint glow of the Stratosphere Restaurant and Bar perched half way up. We had pencilled in a trip to Volcanic Hills Winery at the top of the mountain but because the views were likely obscured by cloud, we opted to instead experience the Redwoods Treewalk.

Joining queues of other families, we edged our way up into the tree canopy once more. The world’s longest tree walk covers 700m and is made up of more than 20 swing bridges and platforms suspended among towering Californian Redwoods. Come night time, a dazzling light show projects laser beams onto the leafy surrounds, creating a magical scene that could be straight out of fantasy film Avatar.

Adding to the allure were hanging lanterns crafted by New Zealand artist David Trubridge. We conjured up stories that the lanterns were pods that the Avatars called home, imagining the blue hybrid human-aliens swinging from the treetops.

Back in the realm of reality, we grabbed a late bite inside a warm and quiet restaurant on ‘Eat Streat’. We were too exhausted from a day of adventure to linger; instead, we slipped into the silky mineral waters of the hot tubs available at our motel.

The mist parted to reveal clear skies the following morning, but it was difficult to tell from inside Kuirau Park. We could have paid to visit an array of geothermal wonders in Rotorua but the free park in the heart of the city gave us an authentic taste – and smell – of the volcanic activity that’s drawn visitors, like us, to the region for generations. We wandered through plumes of steam rising from fizzing lakes and past bubbling mud pools shrouded in leafy ferns.

There are 18 lakes around Rotorua and we outlined the edge of the biggest, the city’s namesake, and then walked the Sulphur Lake Sculpture Trail situated within the pretty grounds of Government Gardens. The iconic Rotorua Museum with its candy-coloured glass windowpanes that once served as a famous spa offering therapeutic treatments to visitors from all over the world made a picturesque backdrop, despite being closed for the foreseeable future because it’s not earthquake safe.

The strum of a guitar drew us to the Rotorua Farmers Market where we ordered crepes and browsed stalls offering produce fresh from the source, handmade soaps and beautiful dried floral arrangements.

Tracing our footsteps of the previous day, we revisited the gallery to purchase some art and do our part in supporting the dreams and talent of Rotorua.

A word of thanks