Suffering from heat exhaustion, we pulled into the Hidden Valley camping area on the edge of Kununurra township, parked in the shadiest spot we could find and made for the pool, which was as warm and unrefreshing as a spa bath.

Around our campsite mangoes dripped from the trees. Rainbow lorikeets and red-shouldered parrots shrieked joyously as they feasted on the fruit, and high in the canopy black cockatoos claimed their share with witch-like cackles. There were half-pecked and -chewed mangoes everywhere and every now and then we would beat off the birds and claim one or two for ourselves.

The camp is on the boundary of Mirima National Park, a colourful jumble of crumbly rounded rock mounds the colour of burnished copper.

Kununurra has only existed since the 1960s when it was built to service the workers on the Ord River Dam nearby. There’s not much charm about its centre, but it trades essential supplies and services in a businesslike manner and has a number of retail diamond outlets – which, no doubt, some visitors consider essential.

Low-slung houses crouch behind the frangipani and poinsettia trees lining the streets. In the middle of the day the town is paralysed by the searing heat of the sun.

South of here is the largest diamond mine in the world. In 1979, at a place called Smoke Creek, a small find of diamonds led prospectors to the Argyle Diamond Pipe and the Argyle Mine now produces about a quarter of the world’s diamonds. The huge open-cast pit is also renowned for its pickings of coloured gems, especially the intense candy floss-coloured diamonds which have become Argyle’s signature stone.

But an even more precious ‘gem’ in the Kimberly is perhaps the presence of Lake Argyle, a man-made body of water that makes Sydney Harbour look like a bath tub.

Before the dam was built, an abundance of water had flowed through the channels of the great Ord River of East Kimberly for only a short part of every year; for the remainder of the year there was a desperate shortage of water. In 1961, authorities began the huge undertaking to dam the Ord River, and in doing so created a lake that is the largest body of fresh water in Australia.

Irrigation from this catchment has now turned 15,000 unproductive hectares of desiccated wasteland into cultivated farmland on which around 70 different crops flourish.

Overlooking the Argyle Dam we found a shady picnic spot although there was no access to the water, which in such a daytime furnace I found rather frustrating. We could gaze at it though, and at the dam. The outing was more memorable for an incident that occurred while I was mid gaze, leaning on a railing and thoughtfully chewing my lunch. 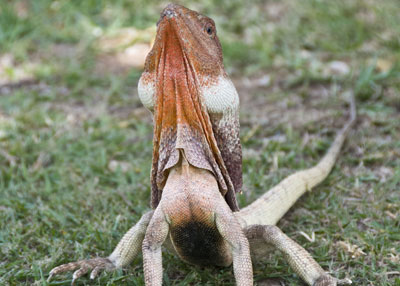 A frilled-neck lizard squatted motionless on the grass, snout to the sky, its enormous neck ruff clamped close against its head like long orange hair. I was totally in the thrall of this creature, and it might also have been in mine; for ten minutes we gazed at each other unmoving and unblinking. In the end it was me who lost this game of statues.

The most talked about feature of the Kimberley, however, is not the lizards, the lake or the diamonds but the Bungle Bungles, giant banded domes of rock found in the 320,000ha Purnululu National Park. They are to the Kimberley what Uluru is to the Northern Territory.

They only really began to reach public gaze in the 1980s, even though they have been sitting out there for 20 million years and Aboriginals had lived there for around 20,000.

Having heard so much about them we were a bit disappointed to learn that we wouldn’t be able to see them at ground level. They were closed due to the high temperatures and a huge fire, which was ‘bungle’ burning at a fast clip. Anyway, anyone who ever thinks of going in there with a caravan, trailer or conventional car can forget it. This is serious four-wheeler country.

The only way for us to get close to the mass of beehive rocks was to fly over them, which would be a one-dimensional experience but certainly better than nothing. As it turned out it might have been better than anything.

We took a flight from the Kununurra airport in a six-seater, Gibbsland Aeronautic Air Van, which had been built in Victoria. Mike the pilot assured us there was food, first aid and water on board should we need to land. As we flew over bone-dry hills and ridges skimpily dotted with trees I was of the opinion that landing anywhere would be a very poor choice.

We skimmed over the 72-km-long Lake Argyle and stared down at small bare islands, the remnants of the hills that stood there before the land was flooded. From that height, they looked like basking crocodiles.

The landform became increasing precipitous, breaking up into razor back ridges that were blackened from recent fires. Puddles of white ash dotted valley floors that looked like patterned carpets.

And then, as we reached the Bungle Bungles, the little plane began to jiggle and slew like an excited puppy. Well, they were an astonishing sight: cluster upon cluster of huge beehive-shaped mounds, glowing orange even through the smoke haze, and striped, like tiger skins. Only 20% of the range comprises these strange striated shapes, the rest is made up of rugged, convoluted and impenetrable gorges slashing their way between rippled ridges or rock outcrops that have formed into monstrous gloops and polyps.

I imagined myself down there, a little spec of meaningless nothing among the millions of years it took to form this deeply scarred terrain. This led me to question how on earth the beehives were formed. The pilot tried to explain with words like palaeozoic, cyanobacteria, convergence and conglomerate, which caused an attack of brain fade.

It’s enough to know that basically it was wind, rain, heat and an awful lot of time that did it – which is about as much as I can say for the whole of Australia.

Reported by Jill Malcolm for our AA Directions Autumn 2020 issue