Kathryn Webster spends a thoroughly enriching week at sea on the Silver Muse.

Early morning, the sky shifting from grey to pearly pink, I spotted a small craft bobbing in the calm sea we’d been ploughing steadily through all night. Then I could see a few pointy-bowed fishing boats, some low-slung cargo vessels and then a host of ships anchored, facing the same tidal way.

Behind them, distant but closing in, shapes against the sky indicated a city. I leaned out over my balcony and watched as we moved closer. We came to a breakwater, a snaking stone structure curving into a welcome embrace. At the port side of it, and as my cabin was on the port that was all I could see, was a totem; a figure standing guard. We had arrived in Jakarta.

A pilot boat moved alongside and a quick-footed captain stepped mid-stream onto a ladder hung from our ship, the Silver Muse.

We entered the busy harbour and the tug got to work, pulling our bow around, turning on a dime so we could slide into a channel lined with small freight ships loading sand, belching smoke; crews sitting in the morning sun, photographing us photographing them, returning our waves. 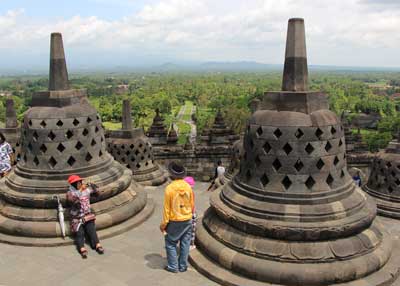 As we got closer to the terminal, music became clearer. At first I thought it was recorded music from a moored vessel but no, it was live – a band playing in our honour. Seated on the concrete wharf, a band of around a dozen played gamelan, xylophone, something brassy, bells, drums – and a troupe of brightly-clothed women danced across the wharf, their headdresses high and sparkly, their hands graceful, their feet stepping in perfect time, their bounce around and across the length of the wharf heart-warming. It was totally touristy and utterly charming.

As soon as we could, we disembarked and set out on buses to look about Jakarta, to marvel at its overheated messiness. We went to a puppet museum, poked around some ancient architecture, looked at old Batavia, hankered for air conditioning. I stayed out beyond the guided tour, although it was a hard city to be in, determined to cram as much into this experience as I could.

Finally, a little past 3pm, I took my place by the ship’s pool and opened my book.

At 5pm, or perhaps a little earlier, I ordered a cocktail.
We had left for Jakarta a couple of days before, departing Singapore one evening and sailing all night and all day over a pale silver sea with the constant whooosh of water against the hull of the ship, the hiss of spray, the quiet thrum of the engine calming and mesmerising.

Sometimes I had to check that we were still moving, the ride was so smooth. The slight quiver of a creamy white moth orchid in my suite became my movement indicator. Of course, it was easy enough to step out of my lovely suite onto my private balcony to check; yes, the sea is sliding by, the ship is on the move.

The ship was gorgeous, every inch of it well considered. My suite had a big soft bed with feathery pillows, a sofa, a lounge chair and a small table. A fridge was stocked daily with whatever I wanted, including champagne, by a butler. Hidden cleverly and discretely behind mirrors were two large screens for watching TV, films or the view from the bow of the ship. Beyond the main cabin was a dressing room and a bathroom – the former with enough draws, shelves and hangers to warrant a full unpack; the latter with a bath. This was luxury.

From the ship’s 11th deck, with its walking track, library with panoramic view and gelato and pizza bars, I could look down on the pool area where guests lounged, waiters loitered and musicians entertained. On other decks various restaurants, cafés and bars offered many various types and styles of nibbling and dining. Most of what was served was covered in the cruise fare; there were only a couple of restaurants and top-shelf drinks that costed extra. I became a regular at the Arts Café for coffee, La Terrazza for buffet breakfast, Kaiseki for sushi and sashimi…

I was a regular, too, at the enrichment lectures. This was a series conducted by a retired professor of humanities, developed especially for the itinerary of the cruise. One I attended was about the Treasure Fleet of China in the early 15th century, another was about the spice trade, another about explorer Ferdinand Magellan. She spoke well, with humour and surprise, and certainly enriched this traveller. 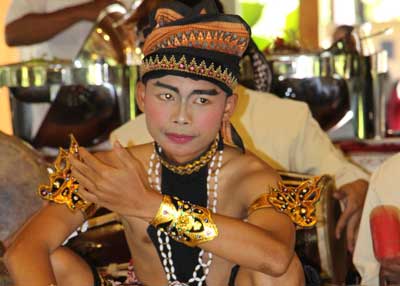 One day we dropped anchor in what seemed to be the middle of nowhere but was actually the middle of the Java Sea, near enough to the tiny island of Karimanjawa. There was what seemed to be a recently abandoned resort there, with bures under palm trees, sandy paths between them, loungers dotted about a pool and a lagoon. The ship’s staff ferried multiple boxes, bags and bottles to the island and set up the world’s most decadent picnic. Some of the Silver Muse’s talented musicians got guitars out and entertained, taking requests and encouraging fun, much like a singalong at a Kiwi barbecue, but they knew all the words to the songs and sang in harmonies.

Early the next day we arrived in Semarang. This was the day I learned the value of taking official excursions. I had decided not to; to be independent, to take a taxi into the centre of town and explore on foot. Well, I didn’t get past the busy terminal gate, crowded with taxi drivers negotiating outrageously overpriced trips. It was too awful, unmanageable; I scuttled back to the ship to spend the day by the pool. Fortunately, I had booked an all-day tour for the following day.

We left for Borobudur Temple at 8.30am in two half empty buses, so as to be more comfortable; escorted by police, so as to not be held up by traffic. People stopped to watch, children waved, assuming we were royalty but we were just rich folk, not wanting to be inconvenienced.

Semarang is a city pocked with pollution and noisy, overcrowded chaos. Beyond it, we came to pleasant hilly suburbs with multi-storied, red-roofed houses in established gardens. We passed rice fields, classic terraced agricultural plots, groves of bamboo and rubber trees, catching glimpses of people working with bent backs, some ploughing with hand-pushed machines, a scattering of animals, fowls, paths disappearing beyond old buildings. It was fertile country, with lush forest and well-worked fields and it felt prosperous because of its green, though clearly people worked very hard to live here.

Whenever we stopped, hawkers were desperate in their efforts to sell us fridge magnets and puppets. It was fascinating to see life unfolding, days being had.

Our tour guide talked incessantly. He gave us a lecture on Hindi and Buddhist religions, explained the eight ways of rightness, told us how Nirvana is achieved…all of which made sense once we got to the temple, about three hours later.

Borobudur was built sometime in the ninth century and was buried under volcanic ash and soil for many years so is well preserved, although damaged by earthquakes and looters. It’s a huge and impressive edifice that can be walked around and up, following steep stepped paths to ‛read’ the detailed bass relief explanation of Buddha’s journey to enlightenment.

The heat was oppressive; I envied a woman who had someone following close behind her with an umbrella and a fan.
I had thought she was extremely wealthy and important but, talking to her at lunch, it turned out she’d paid 150,000 rupiah (about NZ$15) for the service. I struggled under my sunhat but once we were up high, the breeze provided relief, despite the black stone. Finding gaps in the crowds to photograph the stupas and statues and the rural view was challenging but it was incredible to be there; it was a privilege to see.

I eventually wound my way down and followed a shady path to where the tour group had gathered at an open-air restaurant for lunch. The buffet of local food was beautifully done and while we ate we were entertained by lithe, elegant dancers moving to magical, otherworldly music performed by a band behind them. We left for the ship, stopping at a silver factory where a shadow puppet show distracted those not interested in buying jewellery.

Driving back to the pier, again with a police escort, we held our collective breath as our convoy forced oncoming traffic into the ditch.
In Bali the next morning, the ship docked at Benoa and I joined a couple of other cruisers on a jaunt into Kuta where we stalked the markets; wandered the beach. I hadn’t been to Bali before and it was good to get a quick look at it. Back on board, for the last night, I joined some of the gang of solo travellers that I’d met over the week and we ate one last dinner before heading up to the Panorama Lounge for a dance.

I got to appreciate one last adventure. The cruise had come to an end, I’d had a final cup of tea on my balcony and left my cabin for the last time, but was able to join a tour of Bali highlights before being dropped at the airport for the flight home. Wandering around a temple, spending my last rupiah at a batik workshop and visiting a traditional Balinese compound where several generations of a family lived, enriched my morning, no end. It was a final top up to my happily overloaded memory bank.

Reported by Kathryn Webster for our AA Directions Winter 2019 issue

The writer was hosted on Silver Muse for a seven-day Singapore to Bali cruise courtesy of Silversea
Arrange AA Travel Insurance before you go.