Mark Meredith takes in the expansive sights of Banks Peninsula.

The dirt road, with its skiddy surface of loose gravel and stones, fell away alarmingly on the side of the 4WD minibus where I was sitting.

Had our driver lost traction it was all too easy to imagine ourselves shooting over the edge, tumbling down the steep, grassy slope studded with sheep and trees to a ravine covered in regenerating bush. But Joey Cataliotti knew the road intimately. She had been travelling it since she was born and handled the minibus with nonchalant ease while dispensing a constant, enthusiastic flow of information on the ecology of our surroundings.

We were on our way down a mountain to Flea Bay, a sheltered cove carved into a coastline of imposing volcanic cliffs, where her parents Francis and Shireen Helps had their farm and looked after the largest Australasian little penguin colony on mainland New Zealand. 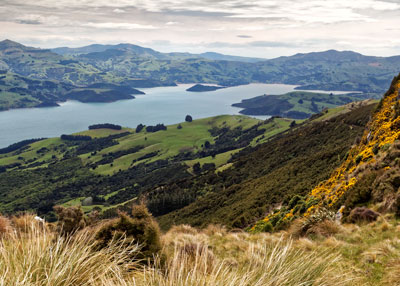 For three decades the Helps family have been protecting white-flippered penguins, Canterbury's own variant of the Australasian Little Penguin, and yellow-eyed penguins, from an army of introduced predators. So successful have they been that some 3,000 little penguins now nest and breed at Flea Bay.

In order to see the penguins you have to join a Pohatu Penguins tour, and my wife and I had joined their 4WD Four Hour Scenic Nature Safari, part of a long-weekend birthday celebration visiting Akaroa and the Banks Peninsula.

Apart from us, the only people on the tour were four foreign tourists – Joey said almost all their clients are foreign tourists – who were dropped off at the top of a hillside to tramp down to Flea Bay through bush that her father has reintroduced to the valley. They would stay on overnight at Flea Bay and see the penguins going about their business after dusk.

During daytime the penguins rest in numbered nesting boxes on the hillside above the bay and along the coastal track among pines above the beach. As part of the tour, our task of “monitoring” the nesting progress inside a few nesting boxes was to determine whether the penguin had a chick or was warming a newly laid egg. Joey lifted a lid and we had a quick peek at the startled little grey-blue feathered bird before the lid was lowered and the light extinguished.

There are baited traps to catch stoats and other predators down near the beach, the most successful bait being something they call “mouse water”. This is a delicious and irresistible – to a stoat – combination of mouse droppings, urine and fur collected from Shireen Helps’ pet mice and left to ferment in a little water in containers in the sun.

The remarkably successful work in eradicating penguin predators, enabling the penguin population to grow, and reforesting areas of the valley is a labour of love by the Helps family. All the funding for this work comes from income from tours like the one we were enjoying, and not from any form of government largesse.

As the minibus made its way along winding ridge lines on our scenic tour, stopping for photo opportunities at breathtaking lookouts, it struck me that Google Maps images of the Banks Peninsula topography hardly do its dramatic form justice.

The peninsula forms a giant, gnarled walnut shape that sticks out of the South Island map just south of Christchurch, the remnants of a complex volcanic landscape filled with steep, eroded valleys and craggy mountains. Looking out at Akaroa Harbour and the ring of mountains that encircle it, sometimes with cloud that billows over the tops like a waterfall, you may have to pinch yourself to remember that the peaceful landscape spread before you is really an ancient, if extinct, volcano that once seethed with subterranean fury.

The mountains ringing today’s Akaroa Harbour were once the volcano's crater wall, and before sea levels rose 6,000 years ago, flooding the crater and valleys, the mountains would have stood twice as tall, their slopes covered with dense forest. Today the forest is gone, except for isolated pockets of regenerating bush in reserves, the land given over to farming and the relentless march of gorse that covers the higher reaches of the mountains in a swathe of yellow flowers.

The scenery by the coast is spectacular, the hills and valleys well suited to sheep and lambs, which skipped about playfully as we trundled past. Green slopes run down to an impossibly blue sea where their progress is abruptly halted by cliffs dropping hundreds of feet to the churning water that chews at a craggy coastline of arches, blowholes and pinnacles.

One such place to appreciate the rugged coastline is from the Akaroa Heads Scenic Reserve. We got out of the van to walk to the lighthouse down a steep path bordered by tussock grass waving in the breeze above Haylocks Bay. The lighthouse is a small automated structure set on a dramatic promontory with sweeping views. The original lighthouse – which was going to be demolished – was bought by concerned members of the community and transported to Akaroa, where it stands today on the coastal road overlooking the town.

Akaroa itself is set in such a gorgeous location it’s not surprising it was voted the number one cruise ship destination in Australasia last year. It’s the ideal port of call. The town is filled with restaurants and bars and arty-crafty shops; it’s a delightful place to wander along the promenade and jetties, soaking up the evening sun and ambience with a drink and a view of the harbour, pied shags roosting in the trees above you.

But our weekend was about nature and scenery, and the day after our penguin expedition we set off on an early-morning cruise to look for dolphins and other wildlife.

Hector’s Dolphin is one of the smallest marine dolphins in the world, endemic to New Zealand and found only in inshore waters around the coast of the South Island. On board we had a dolphin locater in the form of the ship’s dog, Sidney, who can detect the high-frequency ‘clicks’ of echolocation that the dolphins use to find their food. Sidney wears a a life jacket – he has fallen overboard before in his excitement as he runs from one side of the boat to the other barking when he hears the dolphins. Sure enough, he suddenly went nuts as soon he located them, and we saw dolphins skimming through the surface in front of the bow and riding the wake behind us.

Leaving the mouth of the harbour we entered choppier waters that swirled around the rugged coastline of cliffs and caves. We saw flocks of muttonbirds, a giant northern petrel, and numerous fur seals basking on the rocks. As we re-entered the harbour, where there are salmon and mussel farms, more dolphins appeared. I had spent ages trying to photograph them from the top deck, unsuccessfully. Just as I rested my arms from the weight of the heavy lens, two Hector’s dolphins leapt spectacularly into the air in a balletic pirouette.

It seemed a fitting way for them to bid us farewell. If only they had given me an encore.

Reported by Mark Meredith for our AA Directions Summer 2018 issue

Akaroa, 75km from Christchurch on Banks Peninsula, is an historic French village with colonial architecture, boutiques, galleries and cafes. It is a port town, popular as a cruise stop-over, where water-based activities include dolphin watching and sea kayaking.
Read more stories about Banks Peninsula and Akaroa at AA Traveller