All the bells and whistles

Because I am ridiculous I’m keeping my eyes peeled for bears.

Every 30 seconds I ring my bicycle’s dinky bell and then look wildly around. Ben, our local tour guide, has instructed us to chat loudly and occasionally ding-ding our bells.

This is because the worst thing we could do is to come whizzing silently around a corner and surprise a bear. If a bear hears us coming, the logic goes, he’ll scamper away before our paths cross.

“So keep ringing those dinner bells,” Ben says with a grin.

We’re in the ski resort town of Banff, cycling through an incredibly lovely, albeit bear-infested, lakeside forest.

“It’s not bears you really have to be worried about,” Ben shouts as we cycle along. “It’s cougars. You’ll see the bears, but a cougar… you won’t even know it’s there until it’s on you.”

The day before, I’d really wanted to see a bear – but that was because I was safely ensconced in a glass-domed carriage on the Rocky Mountaineer.

I’d boarded this luxurious train in Vancouver and spent two days choo-choo-ing my way through Canada’s majestic Rockies before arriving in Banff.

We’d been told bear sightings were not uncommon along the route and there was a very simple system in place to ensure we didn’t miss seeing a bear if one happened to meander by the tracks: they’d tell us.

While the journey regularly tops ‘best in the world’ lists it does take a little while to get to the good stuff.

When you board there is much fanfare; a pianist tickling ivories at the station, a bagpiper pa-rumping outside, champagne fizzing at your seat and, finally, as the train pulls out, a farewell wave from the entire Rocky Mountaineer organisation who gathers en masse beside the tracks as you leave.

It’s a grand exit and gives the trip a real sense of occasion so it’s a shame the first couple of hours are spent chugging through Vancouver’s industrial estates and uninspiring plains. It’s the scenic equivalent of eating your brussels sprouts before being allowed dessert.

In my travel pack – as opposed to my luggage, which is currently on its own less glamourous adventure where it will meet me at my hotels each evening – is a book I’ve been meaning to read for a long time. I thought this would be a fine time to finally get through it, but I quickly make the decision to leave it in there. This is considered a ‘bucket list’ trip and I don’t want to miss any of it.

The carriages on the Rocky Mountaineer have glass roofs. A see-through roof may not sound like a big deal, but it really is a game changer. Because you can see the sky, you never feel locked in. It also soaks the carriage in light and saturates you in scenery. It’s a brilliant innovation.

There’s a romance to this style of travel, with its gentle rhythm, the click-clack of the tracks, the ever-changing backgrounds. It’s relaxing and tranquil. I’m perfectly willing to concede that anything less than Gold Leaf class, with plush recliners and seat service, wouldn’t have quite the same romance attached to it.

The first notable spot we pass is Hell’s Gate. This gorge on the twisty-turny Fraser River, reportedly almost 180m deep, pushes 200 million gallons of water through a 38m pinch point every minute. It’s foaming and frothy and leaves no doubt that the spot has been named accurately.

We pass through pastures and past grassy mountains that remind me of home. 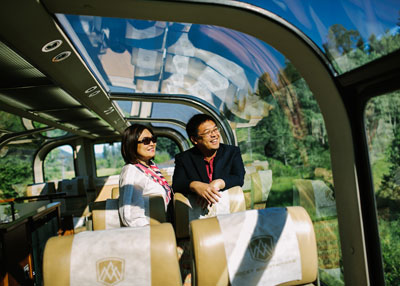 The train regularly slows down at picturesque spots and never seems to break a sweat, even when there’s nothing to see; I’m told the speed is restricted due to the unique double-decker carriages.

We’re on the top floor, underneath is the dining cart which handles two seatings of two services. The food is absolutely delicious and I’m not ashamed to admit that I order two mains (eggs and pancakes) for breakfast. For lunch I gobble down a world-class burger, topped off with homemade chilli sauce from the chef’s personal stash.

Our carriage has four lovely hosts who are excellent storytellers. They regularly jump on the mic to explain the history behind what we are chugging past, direct us to points of interest (such as a 100-year-old osprey nest perched atop a telegraph pole) or reveal some titbit of trivia. This kind of thing can veer into a droning, boring lecture, but these people are engaging and fun.

We pull into Kamloops nine hours later. If you haven’t heard of this town, there’s a reason: it’s small and nondescript. We board the Rocky Mountaineer very early the next day for an 11-hour, 420km haul to Banff. This is the more spectacular part of the journey and why we were all here; we’re entering the territory of the snow-topped Rockies.

There are abundant photo opportunities along the way so I regularly pop down to the open-air area at the back of the carriage. This spot offers the best, unobstructed views and the brisk mountain air snaps away my drowsiness.

As we wind our way around and sometimes through the Rockies, I can’t help but be a little awestruck by their majesty. Even coming from New Zealand, where we have plenty of our own gobsmacking scenery, this landscape makes quite an impression on me.

It’s a gentle journey, an unwinding style of travel that I find soothing and calming, with what must surely be some of the world’s best scenery and a decent dose of genuine luxury.

Reported by Karl Puschmann for our AA Directions winter 2017 issue