Artist R. J. Williams, also known as The Massive, came prepared. His grandmother had modelled for department store Myer in her 20s and he’d made prints of her photos and painted on them.

He joined a group of other street artists at a house in Sydney’s Newtown before they headed out onto the streets to ‘paste up.’

“What does ‘paste up’ mean?” I interrupted. I was on a walking tour of Newtown, run by company Culture Scouts; street artist Craig Bunker was our guide. He was telling us stories like this one about RJ and other Newtown characters as we walked along back alleys and he pointed out their work.

“We meet at someone’s house, mix up the glue, make our posters, and then head out onto the streets with a shopping trolley and a broom,” Craig said. “Then we’ll spend the afternoon cruising around with beers and paste up.”

This cruisy, anything-goes outlook sums up Newtown. I had lived here nearly a decade ago when I studied at Sydney University, but since moving to Bondi had rarely returned.

Now I was spending a weekend re-discovering Newtown. From the get-go, checking in to hotel The Collectionist in nearby Camperdown, my former stomping ground was surprising me.

“We have another floor…” the iPad-bearing receptionist said.

We’d wandered around three floors, going into every room with an open door and we were now back in a corridor. “I think this one!” I declared after seeing a breezy, mostly-white room with floor-to-ceiling glass doors framing a jungle of plants on a patio outside. “Let me just check the next room, though,” and I dashed next door. 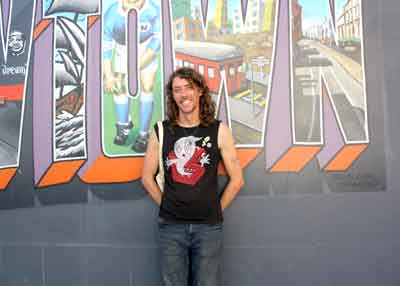 The next had soft lighting, carpeted floors and a navy blue quilt. “Ah, maybe I do like this one better.”

It had gone on and on like this, room after room on three floors, before we were back in the lift down to look at the remaining available rooms.

All 39 of the hotel’s rooms were different. Guests can wander into each before choosing which they like best. It took me 30 minutes to finally settle on Bennie Hasheesh, a boho-themed bedroom with a tassled mirror, embroidered cream pillows and a rust-coloured quilt.

This was just the start of the quirkiness.

That night we took an Uber to Priscilla’s at The Imperial Hotel in nearby suburb Erskenville. The restaurant’s Drag N Dine was on; while feasting on a set menu we enjoyed performances by beautifully made-up drag queens. They strutted along the bar and shimmied their way across a little stage in front of the tables as the wine flowed.

I was more than a little dusty when the walking tour kicked off mid-morning the next day. We traipsed up and down Newtown’s King Street and too many back alleys to count before we met Jo, the author of blog, Instagram account and book Humans of Newtown.

“For me, living here, it’s about the people,” she said. “It’s just a unique place. It’s a bit of a bubble. One morning I opened up my back gate and saw that someone had hung dozens of golf balls from a fig tree.”

Visiting New York City and coming across the book Humans of New York had inspired her. She’d decided to put the stories and photos of her locals online. Within a week, the Instagram account had gained 1,000 followers.

“Someone told me, ‘I feel like this is the glue that has brought the community together,” Jo said. “Another said, ‘I’ve seen that person on the street for ten years and now I know their story’.”

By then it was late afternoon. I walked to a bus stop to head home to Bondi. Newtown had left me feeling creative and utterly inspired. I wanted to decorate every room of my home differently to the next. I wanted to start a community project and to make prints of old photos and decorate them.

And how had RJ’s day of pasting up ended? “After we finished, he’d jumped into a shopping trolley and sped down a hill,” Craig said. “At the end, it wobbled, and we saw him get out, dust himself off and head off down the street. I thought: ‘Wow that’s a really cool dude’.”

Reported by Sangeeta Kocharekar for our AA Directions Summer 2019 issue