In rapidly fading light I stand on a suspension bridge strung between the treetops as the forest awakens with sounds of creatures of the night.

Barely wide enough for one foot, the mesh platform bounces gently beneath me. “Off you go then,” says our guide Sarah, standing on solid earth while I venture forth into the dark.

On an island that already feels like a leap back in time, Glenfern Sanctuary is a step even further. Shielded by a predator-proof fence, it seeks to create a safe haven for native flora and fauna in an effort to turn back the clock to a time before the introduction of predators and pests that have challenged New Zealand’s wild places.

Mountainous, green and relatively untouched, Great Barrier is how the rest of New Zealand used to be; locals roam barefoot, cars are left unlocked and solar-powered lights are usually switched off by 9pm.

I am at the sanctuary, on the island’s west coast, for a guided night walk to discover the creatures that are increasingly thriving here; ones such as the North Island robin, chevron skink and kākā parrot which shriek day and night.

At the end of the suspension bridge I climb a metal ladder to a tiny platform nestled against the trunk of a giant kauri tree, 600 years old.

Darkness envelops me and without vision, other senses are heightened. I hear the screech of birds, smell the richness of the dirt and feel the cool damp in the air. 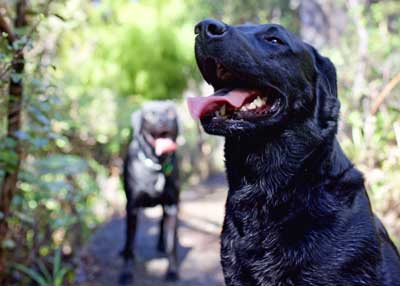 Aucklander Tony Bouzaid visited here in his youth, but when he returned as an adult he noticed the birdsong he so loved was missing, so in 1990 he bought land and set about planting 10,000 native trees.

Assisted by neighbours, he turned the entire peninsula into a sanctuary, slowly bringing it back to life.

It’s no doubt his efforts have created something truly special. Guided by the feeble glow of a single torch, Sarah shows us more of the forest. We bend under a rotting tree trunk and pause to shine the beam on its underside. “Hello you beautiful things,” Sarah whispers with genuine affection, as the light falls on eight Auckland cave wētā.

As long as a hand and with spiny legs and elongated antennae, they look more prehistoric than beautiful, but they’re an exciting sight regardless.

More loveable is a creature hiding in the gnarled and hollowed base of a pūriri tree. “Look inside,” Sarah whispers, edging out of my way. I peer in but all I see is what looks like a fluffy grey slipper – then I make out a beak.

It’s a baby petrel chick, sitting quietly in wait – perhaps for up to two days – for its parents to return from fishing. Black petrels only breed on Great Barrier and Little Barrier Islands, spending the majority of their life at sea, and at Glenfern there are now 80 seabird burrows belonging to either black or Cook’s petrels.

With hushed voices Sarah leads us through the darkness, pointing out all the creatures that would be invisible without her guidance: eels and fish hiding between rocks in creeks, glowworms twinkling in fern-filled gullies.

“Every tree is like an apartment building,” she says, “there is life at every level.” Her passion for nature and its conservation is abundantly clear, and between guiding walks, she and her partner are busy hunting and trapping predators with the help of their Labrador dogs, as well as planting more trees.

When she discovers a sapling that has sprouted of its own accord she gets excited – it means regeneration is happening.

The twinkling of glowworms is eventually replaced by the twinkling of stars as we exit the forest, and I feel as though I’ve just visited another planet. The opportunity to discover the complexity of life that hides in plain sight is rare.

“Everyone gets an understanding of nature here and how rich it is,” Sarah says. “I once had an 80-year-old woman almost in tears after a tour, and even school kids stop talking when they come here, it’s just that special.”

In daylight hours the sanctuary reveals another side, equally beguiling.

On site, the historic Fitzroy House and Glenfern Cottage offer homely accommodation and even a private wharf on the edge of peaceful Port Fitzroy. Kākā are plentiful, munching on figs within metres of the visitor centre, and a walking trail to a lookout gives commanding 360 degree views over the peninsula and across to Little Barrier Island.

Glenfern is most definitely a sanctuary, not just for flora and fauna, but for people too.

Reported by Laura Waters for our AA Directions Spring 2020 issue

A journey from Queenstown to Christchurch takes in the unique colour and beauty of the South...

We visit one of New Zealand’s most remote fine dining restaurants.

Glenfern Sanctuary is on the Kōtuku Peninsula of Great Barrier Island, 93km northeast of Auckland.

Great Barrier Island is accessible by private boat, regular ferries and by air.

For more Auckland travel ideas, pick up a free guide from an AA Centre or see AA Traveller's new travel campaign, We Love You New Zealand! in partnership with Tourism New Zealand.