When bucket list dreams come true. That was the thankful feeling I had gazing from my hotel balcony at sunrise, on a beautiful clear morning, to mighty Aoraki Mount Cook.

The tip of the mountain’s snowy peak sparkled in the sun’s first rays. On my left the hanging glaciers on Mount Sefton were lit up, while the slumbering Hooker Valley which stretched past Mount Wakefield to Mount Cook waited on the spark of the sunshine. If there is a more dramatic view from any hotel room in the world I’d like to see it because this one surpassed all expectations.

In 2014, while on a motorhome trip around the South Island with the kids, we paid a flying visit to The Hermitage Hotel in Aoraki Mount Cook National Park. So sensational was its location and views of the famous mountain, so magnificent the scenery in the park, we vowed to return one day and stay a while.

In November, my wife and I flew to Queenstown to tick off that bucket list item. We picked up a SUV at Queenstown Airport and headed into town for the night. With our borders closed, Queenstown was quieter than I’d ever seen it; finding a table for dinner was easy.

The approach to Mount Cook National Park is made alongside the large and impossibly blue Lake Pūkaki. Like the nearby Tasman Lake, its incredible colour comes from fine silt particles, or glacial flour in the water, a result of glacial erosion of the Tasman Glacier. 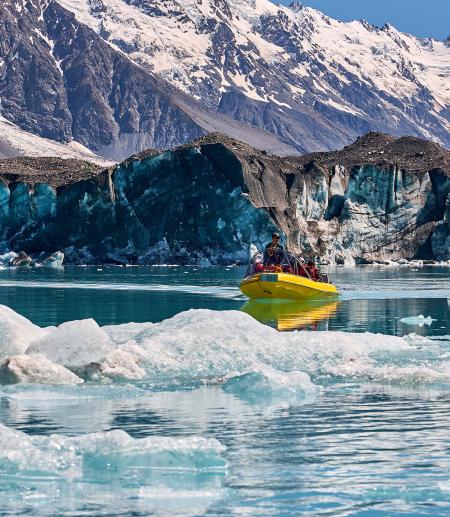 The Tasman Glacier is New Zealand’s longest, stretching for 27km with a depth of over 600m, flowing from the Southern Alps to the Mackenzie Basin. It’s one of the only lakes in the world with its own icebergs.

The glacier lake trip has to be booked through The Hermitage. After an informative commentary on the bus, we were dropped off and walked 15 minutes to the dock at the moraine wall where we boarded three motorised dinghies. It was a cloudless blue day, perfect for seeing the glacier wall, which had calved overnight, scattering small icebergs that floated like glistening jewels on the milky blue water.

The dinghies won’t go within 200m of the glacier wall for safety reasons and I was quite happy to keep my distance. Even in the sun, the wind sweeping over the lake was icy. The thought of tumbling into iceberg-strewn water didn’t bear thinking about.

The glacier trip was part two of a long, tiring day that would include a 10km trek in the afternoon. I had been up before sunrise on the balcony of our sixth floor room to take dawn photos of the mountain. Right now, lunch was calling.

The Hermitage is designed in a dark grey granite, to blend in with the mountains. It’s not terribly attractive. If it was located in a town or along the coast, the hotel would dominate its surroundings in a negative way, but here, among the snow-capped peaks, it looks almost puny.

This is the third iteration of The Hermitage. The first was small, not much more than a cottage, built in 1884. A larger one was built in 1914 to cater to the increasing numbers of visitors to the area, but it burned down in 1957. The Government quickly built a new one in the modernist style we see today, in 1958. The 10-storey Aoraki Wing, with its spectacular views, was completed in 2001. We moved into that wing for our last night, on the ninth floor. Huge glass windows to Mount Sefton and Mount Cook fill your vision as you enter. A telescope is provided for each of these premium rooms.

Although Covid caused an announcement that the hotel would close indefinitely in May 2020 with the loss of 157 jobs, it thankfully reopened in September. It was very busy when we arrived, and the wonderful staff were obviously thrilled to be up and running again.

Among the attractions the hotel offers is a Sir Edmund Hillary museum and a cinema which shows films about the area and mountain rescues. A fine statue of Sir Ed, who honed his pre-Everest mountaineering skills on Mount Cook, stands gazing down the valley looking towards his beloved mountain. 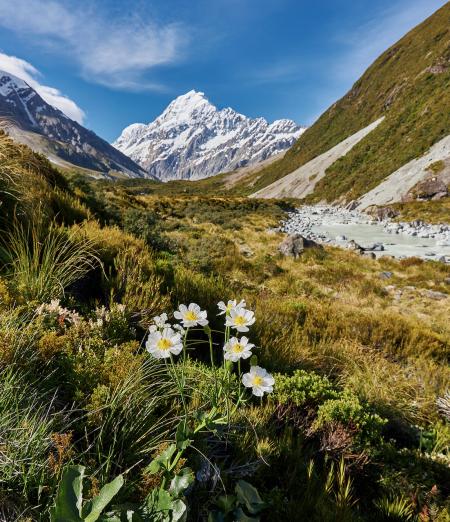 The hazards of exploring the alpine wilderness, showcased in the cinema, are brought home when you walk the valleys below glacier-laden peaks in ever-changing weather and hear thunderous avalanches rumbling in the distance. Near the beginning of the Hooker Valley Track is a poignant memorial to all who have died climbing here.

The 5km Hooker Valley walk to the Hooker Lake at the foot of Mount Cook is the park’s most popular trek. We are not walkers, per se, and in the heat we found it quite hard going, measuring our progress by each suspension bridge. But we both agreed: it’s the most impressive walk we have ever done, so beautiful it’s enough to bring you to tears. I’ve never felt quite so awed by nature and its magnificence as I did on the Hooker Valley walk: the mountains rising steeply around us, scarred by massive landslides; the glaciers hanging off Mount Sefton above Mueller Glacier Lake; the roaring grey river washing over giant boulders; the diversity of alpine vegetation.

After crossing the Mueller suspension bridge, the landscape changed as we followed the Hooker River to its source, the glacial lake below Mount Cook. The valley opened up and a beautiful boardwalk took us over snow tussock, spear grass, large mountain daisies, and the iconic Mount Cook lily which sprouted in beautiful clumps at the pathway’s edge. At the end, above the freezing glacial lake, Mount Cook rose into the blue sky above us, jagged, dangerous, dazzling, wonderful. What a finish. Now we just had to walk all the way back.

The next day, as we prepared to leave, the weather closed in over the mighty mountain, shutting it off from view. Grey clouds scudded low and lowering, sending icy rain sweeping over Hooker Valley which was fast disappearing before our eyes. We congratulated ourselves for doing the wonderful walk the previous day, vowing to return to Aoraki Mount Cook one day and do it all over again.

Reported by Mark Meredith for our Autumn 2022 issue