“Oi, oi!”. They thought they were alone in the bush; hearing someone cry out was alarming.

Was someone lost? And again, “oi!”, loud and insistent.

The two men returned the call then set off, in search. Through heavy bush they crashed, as fast as they could, right to where they estimated the voice had come from. But there was no sign of anyone.

While wondering what to do next, whether to call for help or keep searching, another call came: ‘Oi!”, from further away, calling them deeper into the bush.

The hair on the back of their necks rose, their thoughts turning to patupaiarehe, fairies, and resisting the urge to follow the voices, they left the forest with a story to tell.

Himiona was telling me this on our lunch break, picnicking above a waterfall in Whirinaki rainforest.

A small group of us were walking a five-kilometre track, guided by Himi and his colleague Naphtali, who ‘walk with a story’ for Rainforest Experiences, sharing knowledge of the podocarp forest we were in the thick of. It’s an area on the eastern edge of Te Urewera and is one of the world’s last, and surely most beautiful, prehistoric rainforests.

“Listen; that is the pipiwharauroa – the shining cuckoo.” 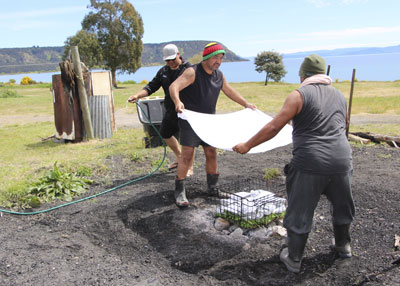 Most of us were New Zealanders and knew the kereru, the tui, what rata looked like and that totara is good for making waka. But I didn’t know about bush anaesthetic, that hollow kahikatea was used for storing food or that the pattern on the trunk of rimu was the inspiration for ta moko. The Dutch couple with us were intrigued by Naphtali’s moko; we were all grateful for her willingness to explain its meaning and relevance. We were all keen to try bush asparagus.

From the pathway following the river, I spotted the flimsy remains of a wooden pa gate on the edge of a grassy site. It was once a campsite, Himi confirmed. These paths were trade routes between Te Urewera region and central North Island – they have been walked by many, over hundreds of years.

The dappled light patterned the trail, delighting me as it would have delighted ancient others. I thought of those journeying through, stopping for a night by the river, waking to a cacophony of birdcall that is much quieter now. How many of them responded to cries in the bush?

It was a weekend of learning about things Maori for me. The following day, I connected with another tour company called Native Xperience who introduced the programme for the day as we walked on the shores of Lake Taupo in search of kawakawa trees. We picked leaves as Aroha explained the health qualities of the plant, how her family uses balms for skin ailments, tea for headaches.

She and her colleague Ngahere took us to Pakira Marae in Waitahanui on the eastern side of the lake. Up behind the marae is forest where deer and pigs are hunted, and a river where trout is caught and watercress harvested. This food is gathered to feed people attending funerals, meetings, and today, guests visiting. We put what we wanted to eat in parcels, popped them in the hangi basket and watched as it was lowered into the smoking pit. Some of us helped cover the lot with dirt.

While the kai steamed, we made kawakawa balm, wove flax flowers and took a short ride to a riverbank only accessible to tangata whenua and their guests. Walking beside the deep, clear, fast-running river, we could see the odd trout lurking, but when we stopped at a wide bend to throw our lines in, there was no sign of them.

Back at the marae they had set a table lakeside, in the shade of great old trees, and we ate our kai with kids running around and the family joining in, ensuring we felt good to be there: welcoming and including us. It felt good.

Reported by Kathryn Webster for our Summer 2016 issue

Visit the AA Traveller website for places to stay in Taupo.