No sooner had I sat in my canoe, beached on the grassy edge of Australia’s Margaret River than I was told to get out again, quickly.

A black flash darts across the bottom of the canoe. My guide Sean scoops up the huntsman spider, returning it to the bush.

I make my way down from the bank I’ve clambered up, take the paddle and manoeuvre onto the water; heart racing from my close encounter with the rather large creepy crawly. But soon, the tranquil surrounds soothe me and I’m calmed by nature.

I’ve joined a tour with Margaret River Discovery Company, led by owner Sean Blocksidge, across some of the region’s most beautiful and remote parts.

Today brings the windiest weather seen in eight years which makes it a workout on the water. Wildlife appear shaken up; we see a pair of Baudin's black cockatoos flee billowing eucalyptus treetops. “Rarer than polar bears,” Sean says.

“They could well be extinct in our lifetime, yet years ago they would blacken the sky with their numbers.” Sean estimates these particular creatures are about 50 years old, so I feel lucky to have spotted them. They certainly would have witnessed the phenomenal growth here.

Despite now being famous for producing world-class wines, the area wasn’t well-known until the 1980s when local winery, Cape Mentelle, won a prestigious wine trophy. It put the region on the map.

We stop at Fraser Gallop Estate for lunch, grazing on local produce set up banquet style in the barrel room, the scent of fermented fruit in the cool air. Kiwi-born Australian wine maker of the year, Clive Otto, chats about the upcoming vintage. He says the light rainfall is welcomed, but not if it steadies, as excess water dilutes flavours.

That night, I lie awake listening to the drops become faster and heavier on the rooftop of Cape Lodge, hoping it won’t affect the wineries.

I can almost hear them breathe a sigh of relief when the following morning dawns clear.

The Margaret River region seems to have it all: vast beaches perfect for surfing, mild weather great for grape growing, and, driving south through Boranup Forest, plenty of nature for adventure. Roads are lined with towering jarra and marri trees, rows of ripening grapes, and signs cautioning drivers about kangaroos. This area is home to some fascinating geological formations too, including Lake, Jewel and Mammoth Caves.

Climbing the steps down to Lake Cave, I’m struck by how old this beauty is: the entrance was discovered by a local girl looking for cattle in 1867, though it took another 30 years for the cave to be fully explored. The underground hollow was caused by rainwater seeping into the limestone rock. Thousands of delicate stalactites and stalagmites adorn the cave ceiling and floor like an old woman dripping in precious jewels.

I make my way back north, stopping at Amelia Park Wines and then at Eagle Bay Brewing Co on Cape Naturaliste for a bite to eat. I notice the brewery out the back of the bar and, on enquiry, learn that washing beer kegs is a bar staff’s worst nightmare, so horizontal tanks in the brewery are connected straight to the front-of-house tap. A handy life hack! 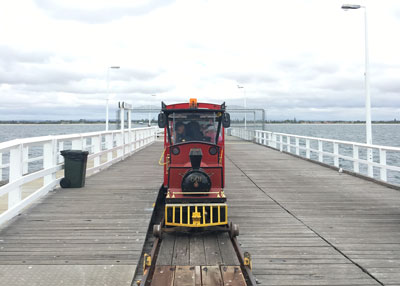 Settling in poolside at the nearby Pullman Bunker Bay seems like the easy activity choice for the afternoon, but I’m eager to explore the beautiful coastline.

Joining a Cape to Cape walking tour with guide Gene Hardy is the best way to do so; Gene shares knowledge about Aboriginal history and geological landforms, as well as good chat. From Sugar Loaf to Bunker Bay, Gene and I talk as though we’re good friends, exchanging stories about family, friends and life’s journeys.

Then I wave goodbye to Gene and make my way up the sandy pathway to the resort for dinner at Other Side of the Moon, indulging in treats from the in-house French pastry chef.

A miniature train sounds its horn; a signal for passengers to board its quaint carriages. It startles the seagulls who squawk across the cloudy sky. Normally calm, the beach is now choppy. The train takes me up the Busselton Jetty, the second longest in the world, which stretches almost two kilometres out to sea. At the end lies a treasure chest submerged amongst the bright coral: an underwater observatory. More than 300 species of marine life, including New Zealand fur seals, have been spotted here. I circle down the underwater concrete cylinder, pressing my nose up to cut-out windows and marvelling at fish and pretty tropical coral attached to the jetty pillars.

Back above sea level, I climb back into my rental and continue north along the coast toward Perth, stopping in sunny Mandurah for lunch. Nicknamed Western Australia’s ‘Little Venice,’ restaurants and art galleries line Mandjar Bay. I decide on a seafood lunch overlooking the estuary. The picturesque setting is made even more spectacular by a show of playful bottlenose dolphins dancing in a boat’s wake.

Reported by Monica Tischler for our AA Directions winter 2017 issue

Getting there
Qantas has direct flights from Auckland to Perth between November and April, twice weekly. The airline will operate non-stop Perth to London on the 787-9 Dreamliner from March 2018. See qantas.com for prices.