Central North Island: but not forgotten

Monica Tischler is transported back in time on the Forgotten World Highway.

A thick curtain of darkness sucks the warmth from my skin.

I switch off the lights in my rail cart and try to decipher the curves of rock that form the 1.5km-long, hand-dug tunnel around me. It took eight back-breaking years to build in 1912, when manpower was the only viable option.

I squeeze my eyes shut and reopen them; no light pierces my pupils.

I spare a thought for the men who constructed the railway lines of the Forgotten World Highway, a historic route from Taumarunui to Stratford in the central North Island. I’m exploring 80km of it by rail cart to Whangamomona.

There’s truth to its name; it seems this part of the world has been lost in time. The tracks were once the main transport line and an essential link to the world; logging, coal mining and farming were boosted with the rail connection. But the track was plagued with floods and notoriously difficult and expensive to maintain.

Building began in 1901 and took close to 32 years to complete at a cost of what would today be more than $9 billion. Men worked tirelessly, earning less than $1 a day for nine-hour shifts and would return to their tents in cold, wet clothes without any spares.

It seems a waste of hard work but all is not lost; the railway just serves a different purpose now. Forgotten World Adventures is using the line to share stories about New Zealand history and to pay tribute to those hard-working and forward-thinking pioneers.

The country air is still and silent.

We pass villages that were once home to thriving communities that now appear to have no more than a town hall, a few rogue chooks and a scattering of flaky weatherboard homes with plumes of smoke wafting from coal range chimneys.

At Ohura, an elderly gentleman in our group exclaims he stopped at a café here for coffee once. Ohura was the happening place in the 1950s with half a dozen churches, a Farmers store, cinema, Ford car dealership and several schools. “That was a very long time ago now,” he sighs, gazing out at overgrown paddocks.

We stop in Tokirima for lunch and I’m delighted to learn about the history here. The 1937 Tokirima Post Office and Savings Bank was the country’s smallest, only accommodating the post mistress and a couple of customers at a time. The post mistress delivered letters by foot or bike. The mail sacks were often heavy but some days the weight seemed excessive and she would discover the station guard had loaded the bag up with stones for a joke.

We move on to Heao where, in 1932, three decades of hard slog came to an end when the tracks from Taumarunui joined with the Stratford line, completing the railway. We pass treasure imbedded in the limestone cliffs: fossils said to be between 12 and 14 million years old. 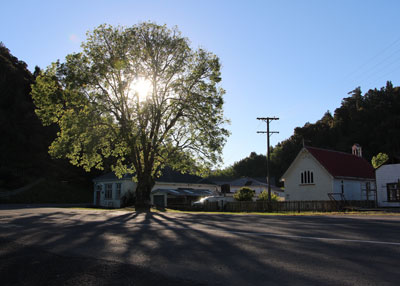 At Tangarakau we learn of Kiwi ingenuity at its finest. Rugged landscape caused many challenges but railway engineers came up with a clever solution to join the Mangatatoko Stream: a trestle viaduct. A large wooden structure was built and a tram line laid across the top, linking both sides. Workers dumped more than 50,000 cubic metres of soil from the excavation of tunnels – by wheelbarrow – to bury the trestle. It took three years. The timber trestle quickly rotted away but the embankment remains as a tribute to not only inventive engineering, but to sheer hard work.

Gumboots lay scattered outside the historical Whangamomona pub; the parking metre outside jokingly reads ‘no time limit’. In fact, there’s a higher chance of getting run over by cattle than
by a vehicle, a local muses. The night is quiet.

We now navigate another historical transport line: the Whanganui River. For more than 800 years Māori lived along its banks, building villages, some of which still remain. European settlers followed in search of a new life and farming opportunities. In the early 1900s, visitors enjoyed leisurely river cruises. Today, we travel at speed
by jet boat.

Earlier that day we were whisked by helicopter from Whangamomona, over the Whanganui National Park, to a remote clearing in the Mangaparua Valley. We crossed the iconic Bridge to Nowhere, built in 1936 in the hope that the upper reaches of the Whanganui River would be a thriving community. It was never used; the land wasn’t suitable for farming or settling.

The wind whipped through my hair as the speed of the jet boat took us back to Taumarunui. I’m grateful to those who came before me, who through utter grit, determination and brain power lay the foundations for what we have today.

The writer was a guest of Forgotten World Adventures which includes accommodation in its packages.

While you’re there
Explore the Whanganui River. Hire a canoe, fish for trout, or walk along its banks.

Breathe in soothing scents at Lauren’s Lavender Farm, an idyllic setting just out of Taumarunui. Sit among the floral fields with a bite to eat from the farmhouse café.

Either side of Taumarunui sits the Whanganui National Park and the Tongariro World Heritage area, both home to an abundance of walks revealing stunning scenery.