Chilling out in Mangōnui, Northland

Sue Hoffart visits Mangōnui in Northland for a dose of culture and history and relaxation.

This may be the ultimate way to reach a winery. Grab wallet, sunscreen and one double kayak, then paddle 15 minutes across Mangōnui Harbour to the northern tip of Paewhenua Island. 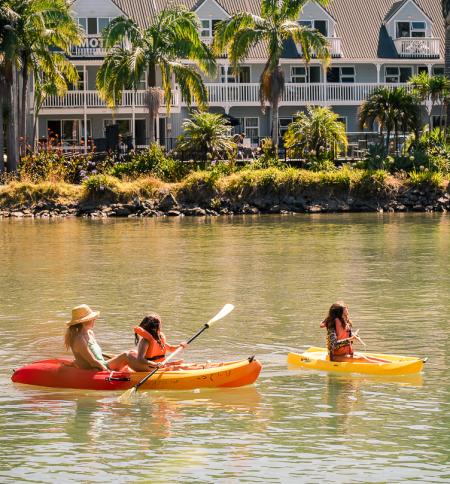 Beach the boat and stroll a few metres uphill to Dancing Petrel Vineyard’s waterfront tasting room, which faces historic Mangōnui township and the entrance to Doubtless Bay. Visits are by appointment only and owner Kim Gilkison admits most would be customers arrive by road; the island is actually a peninsula, connected to SH10 on Northland’s eastern coast. However, the kayaking option is vastly more fun.

We sample eight wines and leave with broad grins and a bottle of oaked viognier tucked into the bottom of our kayak. Somehow, the return paddle seems considerably easier with all those tastings under our belts.

The unplanned kayak adventure happens only because our hosts at Mangōnui Waterfront Apartments offer lifejackets and the use of several vessels including a stand-up paddleboard. This is a great part of the world to be a water lover, with legendary fishing as well as excellent swimming and coastal walking options close by. The accommodation is a literal stone’s throw from the deep, sheltered harbour that has been luring humans since Polynesian explorer Kupe’s arrival around 900AD. Whalers showed up much later, followed by European settlers and traders, millers, flax and gum merchants.

These days, trade tends more towards café fare and tourist trinkets, with some smart boutique stores and arty offerings strung along the waterside road. The Four Square sells Dancing Petrel wine and Little Kitchen Café has a row of shelves dedicated to local foodie treats including salt that is harvested six minutes’ drive up the coast.

A couple of men dangle rods off the wharf, which is busy with boats and a pair of Moana seafood chiller trucks lined up to cart away the kaimoana. Further along, the scent of smoking fish wafts from the back of the fish and chip shop built on piles over the water, and locals swear the Thai restaurant down the street is the best in New Zealand. 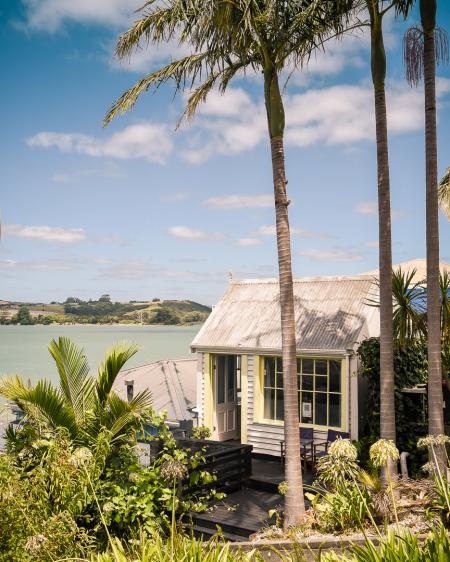 The old courthouse, erected in 1892, now houses a gallery while the two-storey verandaed hotel has been serving pints for almost 120 years.

Our accommodation is a similar age to the hotel. When it was purchased by then property developer Daniel Thompson in 1985, he had big plans that he couldn’t bear to follow through with. “My idea completely changed,” he says. “I saw the beauty in what was there, and shifted my thinking.” Instead, he instigated creation of the Mangōnui conservation zone, which now protects the town’s heritage buildings.

One corner of the community hall, built in 1894, hosts a volunteer-run library where books are still stamped with ink, the old-fashioned way. Used books are for sale for a gold coin. On the day I visit, the hall has already hosted a tai chi class and a keep-fit class, and the librarian confides that the indoor bowling nights are amusing because the floor slopes. She is a retired chartered accountant who moved to Mangōnui when her husband took up a two-year teaching job. She says the lifestyle and ‘nice people’ have ensured they stayed put for the last 43 years.

A resident book borrower agrees. The night she arrived from Auckland, seven years ago, a checkout operator at the local Four Square store introduced her to a fellow customer who promptly invited her to a street party that same evening. “It’s the best thing I ever did,” she says of her shift north. “Here, you can smile at people and they smile back.”

And what’s not to smile about, I ponder, as I don walking shoes and head uphill to watch the sunrise. A path cuts above the town and down to neighbouring Mill Bay, named for the sawmill that did a roaring trade in kauri logs in the late 1800s. Nowadays, the bay is scattered with yachts and pleasure boats and a local greets us with a wave. “Great spot,” we call. “It is,” he agrees. Then adds, “don’t tell too many people.”

From here, a Department of Conservation track connects to the high point I’ve had my eye on. At the Rangikapiti Pā site, I find a man sitting quietly, facing the town. He used to live nearby and, when he visits now, he likes to stay in the same motel on Coopers Beach and trek up to this same spot each morning of his stay.

“I could sit here for hours,” he tells me, as we mull over the historical significance of this place, where Ngāti Kahu found strategic advantage and where we can relish sweeping 360-degree views. Below us, Butler Point is home to another pā site as well as a whaling museum renowned for its artefacts, restored whaleboat and historically significant gardens.

In the opposite direction, Coopers Beach is a perfect golden arc of sand and sparkling sea, with a thick fringe of grandaddy pōhutukawa trees that obscure most of the dwellings. A tyre swing and a clear-flowing stream complete the idyllic picture.

There are other stunning beaches to the north I’m told several times by helpful locals keen to point out neighbouring attractions. They tell me I can drive to another winery, olive groves, several sightseeing tours, Karikari Peninsula and Cape Rēinga just up the road. But I stubbornly refuse to leave for two days, too content and too charmed to be tempted into a vehicle when a walk or a paddle will take me everywhere I want to be.

Reported by Sue Hoffart for our Autumn 2022 issue