We came from New Zealand, the UK and US, Switzerland and Spain: four on their honeymoons, two on a post-children OE, some researching for a travel programme, a few purely on vacation.

Everyone was achieving an ambition in coming to the Galapagos Islands, and most of us were faintly astonished at how easy it was to reach somewhere so famously isolated: it’s just 90 minutes by plane from Guayaquil, Ecuador’s second city. Whisked on board the Ocean Spray after arriving on San Cristobal Island, Cruise Director Debora gave us the tour of this luxurious 16-berth catamaran: elegantly decorated dining room and lounge, open-air dining and bar, a Jacuzzi on the top deck, plenty of viewing areas and our cabins, roomy air-conditioned staterooms.

The boat is constantly touring the islands and most guests were here for a week, some of us, sadly, for only three nights. We met Morris, our naturalist/guide who, like all the staff on this locally owned boat, was a native of the islands.

Far from being jaded by constant exposure to the distinctive wildlife that makes the islands so fascinating to a newcomer, he was as excited as we were to observe their interactions, and to try to capture the ultimate photograph. Not just of the creatures: at the end of our cruise, he presented an edited video in which we, too, starred. He taught us geology, geography and history, on the spot, with the aid of diagrams scratched in the damp sand with a stick, and we understood the why and the how, and the importance of the Darwin connection to these volcanic islands.

But for us all, it was the wildlife that we’d come for, and it was everywhere. In the morning, dainty Elliot’s storm-petrels danced on the glossy water above their reflections, until they were broken by sea lions showing off their swimming skills. Frigate birds soared overhead, and brown pelicans sat on the rough black basalt rocks on the shore, delicately preening their feathers with their huge bills. Marine iguanas, red and black, basked in the sun, occasionally sneezing salt over each other. Everywhere, there were blue-footed boobies, their webbed feet looking artificially coloured: we saw them up close, sitting on nests of two eggs surrounded by a white ring of splashed guano — no need for camouflage in these predator-free islands — and a newly hatched chick, grey and spiky. We watched as an older chick, white and fluffy, nagged its mother until she regurgitated an unsuitably large fish, which she then swallowed again, for later. 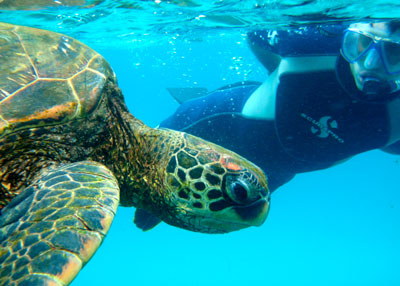 On an untouched morning, we glided in the pangas (inflatable boats) into a mangrove-edged lagoon where a large flock of boobies swirled through the air with aerobatic ease and then, suddenly, dived like missiles. The water erupted with scores of explosive splashes then was still for a moment before the birds popped back onto the surface to swallow their fish, and take off again. They did it over and over. There was just as much to see and admire under the water.

Kitted out with snorkelling gear and wetsuits — needed because the cold Humboldt Current is what keeps the sea life so abundant — we slipped into the clear, turquoise water and were delighted. Turtles, everywhere!

It was late August, and the moon was full, so in the bay off Floreana Island green turtles waited for night-time to drag themselves ashore and lay their eggs. They dozed on the bottom, or cruised over the rocks grazing on the algae and, far from being disturbed by our presence, it was hard to back off fast enough to keep the recommended distance from them. The sea lions were the real rebels, powering through the water to inspect us closely, twirling and diving in what it was hard not to see as a demonstration of how clumsy we were in comparison with their ease and grace. Nose-to-nose with their whiskery faces, or hearing them barking as they sprawled in large groups on the sand in the sun, we could readily accept that their closest relative is the dog.

The sheer variety of sea life, from starfish to school fish to huge pink and turquoise parrot fish, to rays, to reef sharks, to a jauntily striped moray eel, kept us all fascinated as we circled the ring of rocks that make up the Devil’s Crown, a drowned volcano with a coral reef in its centre. It was only afterwards that we realised we were chilled, but with a warm Jacuzzi for our outsides, and a cup of hot chocolate for our insides, we were soon restored to comfort.

It was a typically thoughtful touch by the hard-working crew on the Ocean Spray, and no-one did more for our well-being than Adrian, the chef. While the dinner table conversation was a highlight of the day, it was the food that was the star act. It was excellent: beautifully presented, delicious, and different every day, with a strong emphasis on local ingredients. Who knows what would have happened the day that the captain announced dolphins, if it had been at the beginning of a meal, instead of at the end. Fortunately, we were spared that agonising choice and left our empty dessert bowls to rush outside and hang over the bow and watch as a dozen or more bottlenose dolphins rode the waves, leaping and diving with as much joy as we felt to see them. It was just another perfect Ocean Spray moment.

Reported by Pamela Wade for our AA Directions Summer 2017 issue

Before you go, make sure you’re covered. Go to AA Insurance  or call into an AA Centre.