Cityscape melds into rolling pasture as the carriage pulls away from the Christchurch Railway Station, picking up speed. I sink further into my seat, grateful to be doing nothing but enjoying the view.

Over the next five hours, the train will snake along the South Island’s east coast from Christchurch to Picton on one of The Great Journeys of New Zealand: the Coastal Pacific.

Other passengers scurry off to the on-board café. or immerse themselves in their books, but every time I open mine the view steals my attention and I sit transfixed by what’s unfolding. I don’t want to look away in case I miss something important.

Helpfully, I’m plugged into headphones that relay commentary on what we are passing, ensuring no detail is missed. The train chugs through Rangiora; I hear that its sunshine hours rival those in Nelson and Hawke’s Bay. In February 1972 New Zealand’s hottest temperature was recorded here; a scorching 42.4ºC.

We pass historic railway cottages built in 1902 that now serve as rustic holiday homes and then through a region called No Not I. Yes, that’s the official name. The story goes that a member of the community was asked to name the area but he didn’t want the responsibility; his response was interpreted rather literally.

We zoom past braided rivers. I learn that there are only three places in the world with these beautiful, intricate networks of water – New Zealand, Alaska and the Himalayas.

The Pacific comes into view and we follow its coastline for the next 100km. It’s a playground for wildlife: terns, shearwaters, kekeno New Zealand fur seals, whales and various breeds of dolphin. I glimpse a dolphin leaping from the water just as the train dips into darkness through the 900m-long Parititahi Tunnel.

The translation of Kaikōura is ‘to eat crayfish,’ so it comes as no surprise to learn that many Kaikōura people make their living selling the delicacy, including those operating the famous Nin’s Bin. The blue-and-white caravan parked on the ocean front attracts hungry tourists and locals alike, including white-feathered, red-beaked ones perched squawking on the roof.

North of the town there are seven kilometres of completely new road and rail. It’s been a massive undertaking to fix the damage to the coastline caused by 2016’s 7.8-magnitude earthquake that buckled, twisted and spliced the land, pulling new chunks of seabed to the surface. Rockfall even trapped a train driver in a rail tunnel overnight; I imagine how terrifying that must have been, waiting to be rescued.

A haze of pink catches my eye; Lake Grassmere salt works. Natural algae in the pond of water pumped directly from the ocean causes the rosy hue, the same phenomena that gives the Red Sea its name. 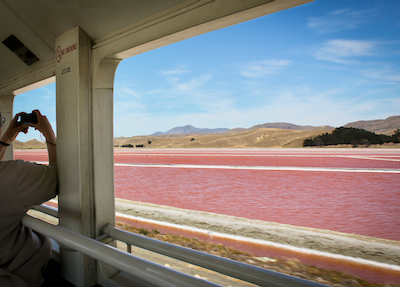 Before the vineyards of Awatere Valley come into view the train rattles through Seddon, the small farming settlement named after an early New Zealand Prime Minister. Richard Seddon was in power when some notable policies came to fruition, such as introducing the old age pension and granting women the right to vote. I was disappointed to hear was opposed to that particular law change, until I remember it’s suffragette Kate Sheppard’s face on today’s ten dollar note, not ‘King Dick’s’ as he was known, and that makes me smile.

Ironically, rain smudges the scenery as we pass through Blenheim – ‘the Sunshine Capital’ – which, they say, gets 2,500 golden hours each year. That’s 500 more than the New Zealand average. Winemaking and olive growing are lucrative industries here and we see the evidence of that flash by.

The final stop of the journey is Picton and when the train halts, there’s a flurry of excitement as passengers disembark one adventure for the next. For me, it’s on board the Interislander ferry, from where I witness the emerald coves of the Marlborough Sounds giving way to the expanse of Cook Strait before I’m greeted by the dazzling city lights of Wellington.

Reported by Monica Tischler for our AA Directions Spring 2021 issue

Click here for AA Member deals on the Interislander