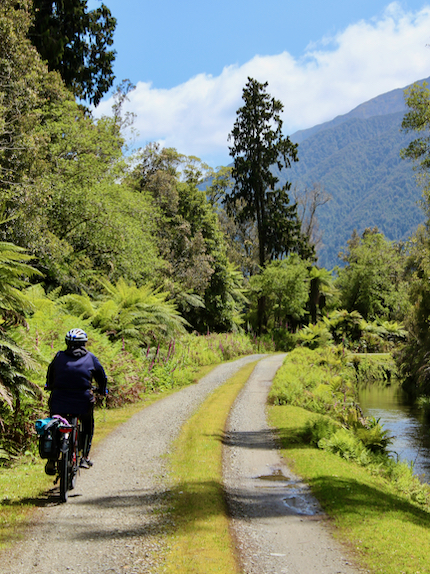 Over Arthur’s Pass, under a shifting sky, the view is framed by scree, raw where the snow has been and gone. Higher peaks are still dusted with white. People around me in the van point out various valleys and saddles, describing trails they’ve walked, sharing past adventures.

I’m sharing this adventure with twelve others; two guides – Rob and Steve – and fellow tourists from Auckland, Christchurch, Hamilton and Nelson. My sister and I had met the others that morning and now we’re headed for the West Coast.

The closer we get, the moodier and wider the landscape gets. The wild sea, when it appears, stretches far away. At Ross we climb out and stretch and our bikes are unloaded from the trailer.

We’re itching to get going on the famous West Coast Wilderness Trail. Each of us is fitted to our ebikes, the basics explained, and off we go – shepherded by Steve while Rob drives ahead to rendezvous later.

The first part of the trail is straight as an arrow following the coast north, along a smooth wide path. Then we come to bush where the track narrows and we wind through shadow and through tunnels of pretty green; it’s enchanting and magical.

Along a sturdy boardwalk, we cross wetlands then take paths that were once tramlines used for forestry and ride up to Treetops, a rainforest park featuring massive rimu, kāmahi and other giants. Here we wander out to a cantilevered platform overlooking Lake Mahinapua and up, up a spiral staircase to look across the canopy and down into trees’ crowns. It’s a beautiful experience, up with the birds. 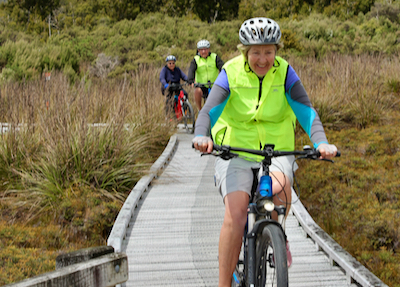 Back on the bikes, we set out for the last stretch to Hokitika, about 16 kilometres, which took only about half an hour including stops for photographs. This is our first lesson in ebike riding: we see how far we have to go and think it will take an age by bike, before remembering the ‘e’ bit. It’s easy to do 25km/hour although – along the narrow tracks with distractingly beautiful bush, sparkly views and speckle-shadowed tunnels – we tend to slow down. Over the days to come, we average about 15km/hour. Near the coast we stop to look down into the clear cool water of a river rushing to the sea, weed dancing against the glassy surface.

We ride a skinny path running alongside a long road bridge, safely away from the traffic, into Hokitika, and along the beach to a hotel with views out to the sunset.

We’re feeling triumphant. It’s been a lovely first day and I’m feeling confident. This is my first experience of ebiking; I love how, when faced with a hill, I can pop the bike into boost and a soft gear and zoom up, easy-as, as if pulled by a thread.

Those on the tour are aged in their late 50s up to early 80s. Everyone is active and adventurous and while some are no doubt fitter than others, being on ebikes evens it out.

Wednesday dawns overcast. I ask a local at breakfast what the weather might do and she says: “Well, it’s the West Coast so either wind or rain, hopefully not both or too much.”

From Hokitika, instead of riding over the long bridge we go under it and through back streets and then inland, along a trail and a quiet rural road.

At Lake Kaniere we have coffee from thermoses on the shore then ride around the edge of the lake for several kilometres, up and down and at times fast on the smooth road, with an ear out for traffic, but there isn’t much, and any that passes us does so respectfully. 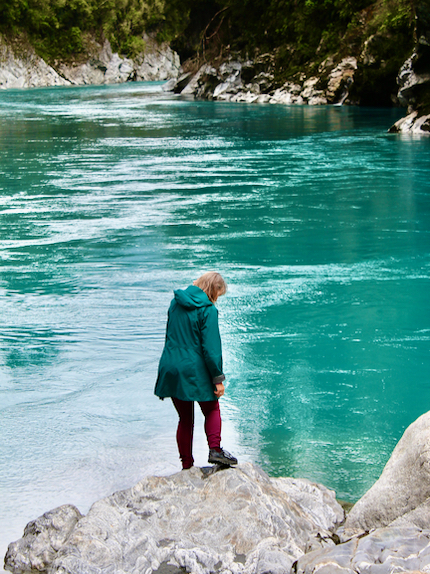 At Dorothy Falls the guide who is driving that day meets us with lunch; we sit chatting, eating filled rolls and ginger slices with hot tea and mandarins. From here we ride through farmland, along long straight roads with a strong headwind that doesn’t matter because we’re on ebikes! Boosted. No problem.

We meet the van and pile in, the bikes on the trailer, and drive up to Hokitika Gorge, a stunning place with an otherworldly turquoise river flowing between high, bush-clad cliffs. We walk a loop through the bush, stopping many times for photographs, crossing the river on elegant swingbridges.

Back in Hokitika we’re in time to wander the streets and catch a few shops open, wishing there was more opportunity to see more of the local craft, the pounamu, the sock museum, which is a personal favourite. Our noses pressing against the glass of a possum wool shop catches the attention of that retailer; she opens for us and lets us browse, stroke the soft pelts, select possum and merino socks. Fish and chips seems the obvious choice for dinner, eaten on the beach at sunset, of course. We wander in the last of the light to the river mouth where, in gold rush days, ships would wreck at an average of one a week.

On day three the van delivers us back to Lake Kaniere, close to where we had ended the day before. We ride along a green tunnel of bush, along a country road, along water races – the terrain changing all the time. We get to a climb, meandering around multiple corners past foxgloves and horopito and clumps of reeds, up to a plateau to Cowboy Paradise – an odd place, with accommodation, a bar and great views.

From there we ride through lush bush and have to negotiate some challenging switchbacks, some of which prove too tricky for me so I just get off and walk my bike. Lunch is a picnic in the shade at Trapper’s Rest and we ride the banks of a long reservoir before joining country roads into Kūmara Junction and our beds for the night at the small town’s classic and classy old hotel.

Over the road, the history of the town is presented in panels telling stories of the families, the mining and forestry, of the war, the construction of the water races. It’s a compelling, insightful exhibition that connects with the past in a profound way.

We have to have some rain; it is inevitable. The stretch between Kūmara and Greymouth proves soggy but we all have good raincoats and, at one point, the support van meets us with comforting hot drinks. Once through bush, we follow the coastline, mesmerised by the steady, forceful pounding of creamy gold surf and further out, the silver and bottle-green sea stretching away forever. 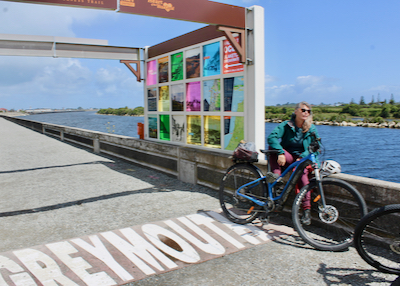 Greymouth is the official end of the trail; once we’ve dried off we celebrate over lunch. Bikes loaded, we climb into the van and drive north. On one side steep hills rise, fully clad with bush groomed by the wind; to the left, the sea.

We stop in Punakāiki and walk out to the pancake rocks and blowholes which are in full performance at high tide. The night in Punakāiki is in a room right on the coast, looking over the sand to a mad mess of sea foam that has gathered and jiggled and rolled its silly way up the tide.

Our last group meal is at the local pub sitting at a long table, reliving the highlights, congratulating each other on mission accomplished and planning the next cycle tour.