Down at the polo club

They serve Pimm’s cocktails at the Wanstead Polo Club.

“I’ve heard they’re quite good,” says Lochie behind the bar as he unscrews the top of the pre-mix bottle and drops it onto the dirt floor.

This is no ‘champagne-flutes-and-stilettos’ kind of polo match. At Wanstead, in rural Central Hawke's Bay, the clubhouse is a converted shed in a paddock. During the off-season, the five-hectare pitch is grazed by sheep.

The club was formed back in 1958 when a group of young farmers decided to try out their everyday horsemanship skills on the sport.

“They didn’t have any experience playing polo, but everybody in those days rode horses,” explains club president, Simon Coddington.

Over the last 60 years, the club has evolved to become a training ground for talented players, some of whom have gone on to have international polo careers, but Wanstead has always been a hub for the local community.

Owned by Andy and Hayley Barrett, Lake Station has been home to Wanstead Polo Club since the beginning. “It has always been a strong focal point for the community, whether they’re into polo or not,” Andy says. “People come down on a weekend when there’s nothing else to do; the adults have a beer and the kids are free to run around.” 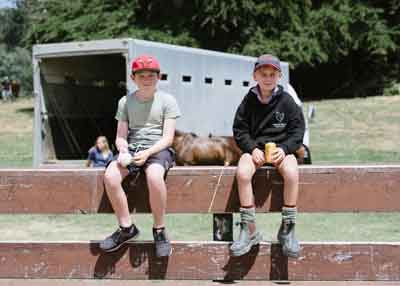 On the day of the Barrett-Dearden Memorial Cup – Wanstead’s biggest annual home-game tournament – teams have travelled from around the North Island to compete.

Today’s match is a guaranteed win for the club – Wanstead A playing Wanstead B. As riders take to the pitch, the horses are alert with anticipation – their ears pricked, chuffing as they canter onto the field.

Along with an unflappable nature, polo ponies have distinctive clipped manes, like buzz cuts, so the players’ hands don’t get tangled when they’re riding one-handed. “There is no regulation size for a polo pony,” Simon explains, “but if they’re too small they’re not quick enough and if they’re too big you’re too far away from the ball.”

The game is played by two teams of four, with each player in a specific position, although with no offside rule, they can travel anywhere on the field – including incredibly close to the clubhouse.

With a rumble of hooves, the ten horses thunder past the open-fronted shed. Players jostle and shout, then veer off again, following the clack of the white ball. Two umpires trot along behind – black and white striped, like magpies – collecting spare balls and adjudicating the match.

It’s a thrilling sport to watch – the impressive strength of the ponies, all rippling muscle and power – combined with the skill of riders standing high in their stirrups, riding one-handed as they gallop at full speed across the vast pitch.

Off-field, the pace is easy. Ponies whinny to each other, tethered to horse trucks in the shade. Kids mess around with polo mallets, knocking stray balls along the boundary, or circling lazily on mountain bikes, swigging soft drinks.

Young grooms with sunburnt arms and collars turned up against the Hawke’s Bay heat brush and braid and strap and saddle the glossy ponies, readying them for their turn on the pitch.

Later in the afternoon, the barbecue groans with steak and local lamb for a post-match feed. The waft of sizzling onions mingles with the scent of minty grass, leather and the unmistakable earthy smell of horses. Spectators watch from wooden benches, some sipping beers, others Pimm’s – most wearing dusty jandals or gumboots.

“Lots of people who come to a match for the first time ask ‘what do I wear?’ and we say, ‘oh, just whatever you’ve got on!’” laughs Hayley.

“That’s what’s so nice about it – people immediately relax when they get down here because it is so informal. It’s just a whole bunch of farmers out playing polo.”

Reported by Jo Percival for our AA Directions Summer 2019 issue