Down by the river

Later that night, snug in my Alexandra motel unit, I was woken by howling winds and staccato rain peppering the roof. I made an inventory of my cold-weather gear: coats, hats, gloves, a balaclava I’d knitted myself, merino thermals, serious socks. If I wore everything all at once and dried it out each night, I’d be fine. It’s amazing how bold one feels beneath the comfort of a duvet.

I’m in Clyde, a hamlet settled in the 1860s following the area’s first gold strike. I’ve been told that in just one year, the region yielded 2,000kgs of gold. Today, the almost impossibly quaint village is like a little time capsule, with the mammoth Clyde Dam serving to remind me which century I’m in. Saddled up on my hired bike, I roll along

Clyde’s pretty streets, pass stone buildings reflecting the town’s past, and nose downhill before crossing a bridge that appears to have been constructed from Meccano.

The path is strewn with a carpet of gold leaves and bare-branched trees form tunnels overhead, the last of autumn’s finery clinging on. Along this leg the track does little more than undulate, but there are a couple of moments when the rain hits hard and I dig deep, hoping to outrun the clouds.

The duns and greys of the rocks on the far riverbank merge into the chalky-green of the water. Mostly the river is as smooth as glass, occasionally disturbed by whorls and eddies. It would be mesmerising to sit and watch it for a while, but that sort of indulgence is reserved for kinder weather. Because of the iffy weather, the 13-kilometre jet boat ride from Doctors Point to Shingle Creek is pulled at the last minute.

The skipper said it was snowing in his neck of the woods and he didn’t want his boat to hit an iceberg. Fair call. Disheartened, I quickly process the loss because the portion I did knock off was fabulous and in four short hours, give or take, I trundle back into Clyde to set up camp beside the fire at the Bank Café. Rain or shine, with or without a jet boat ride, this was spectacular riding and not too challenging, either.

Waking at Quince Cottage, an adorable B&B in the middle of rural Millers Flat, it’s been another night of torrential rain and howling gales and there is no sign of it clearing.

This leg begins at the majestic concrete edifice that is the Roxburgh Dam. I mount my bike and ride the gentle riverside path with rabbits, hawks, hares, quails and fantails for company. It rains heavily most of the day. On the rare occasions the clouds part and the distant ranges show themselves, snow appears to have edged lower.

Sheep grazing in orchards look up at me in disbelief. Beneath my wheels, carpets of sodden leaves range in colour from deep grape to dark chocolate, a base for brave mushrooms who have taken their chances in the middle of the path; clearly they weren’t expecting traffic. Ten kilometres later, in Roxburgh, I have to spend a penny.

Impressive, space-age mechanical loos are a surprise here: robot soap, robot water, robot air-dry, even the loo paper is robot-rationed. The experience is accompanied by a jazzy version of What the World Needs Now. Back on the path, restorative cuppa and cake in the tank, the rain continues to fall. I pedal past more broad-river beauty.

After 18kms of easy riding, just one kilometre from Millers Flat, I turn off the trail to visit the remains of the Teviot Valley Woolshed. The original 1864 homestead was famed for its enormity, while the shed could handle 32 shearers at a time, an epic team even by today’s standards. Following a fire in the 1920s, and further dilapidation down the years, the remains now resemble Roman ruins.

Bedraggled, I ride the last little snippet back to Quince Cottage where I tumble, relieved, into a warm shower.

I wake to a perfect day. There are views for miles in every direction and more snow on the distant ranges. I ride through sunny Millers Flat, past the angelic Anglican Church, the Four Square, the tiny school, the community pool and the hall before turning my back on civilisation.

Into the hinterland I go, to find more pretty bush and more fast-flowing turquoise, with several significant sites along the way. I get goose bumps standing at the graves of Somebody’s Darling and William Rigney, the man who saw fit to bury a stranger. I marvel, too, at Horseshoe Bend Bridge. Built over 100 years ago, it replaced a pulley chair that the children of the area used to cross the river to get to school, until a councillor admitted at a council meeting that the one and only time he rode in the chair, he was so terrified he recited The Lord's Prayer over and over until he was safely on the other side. I also spend some time peering inside a cave, little more than a crevice, knowing it was some hardy miner’s digs.

Giant hares bound across the path and above me, yellowheads (mohua) are out in force, the welcome sun reflecting off their golden plumage. Punctuating the river’s banks are the ruins of several bridges, all but washed away, serving as reminders of once thriving communities.

After 20kms of contemplation, Beaumont appears and a welcome arrow points me towards the pub. It’s allegedly  ‘The Friendliest Hotel in Central,’ with decor a taxidermy tribute to hunting.

Following a half pint of Speights, I am back on the trail, Lawrence in my sights and nature in my nostrils. A mountain of intensely aromatic gum chips, a waft of fresh cut pine, warm bracken: cycling seems to sharpen my senses. 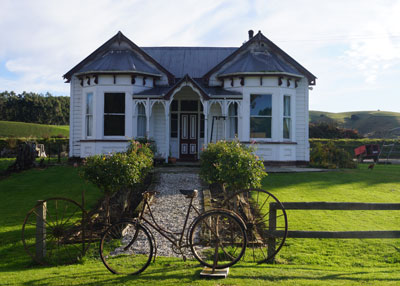 But then things get serious. From Beaumont the trail leaves the river and winds up to Big Hill Tunnel. There are no prizes for guessing how this passage earned its name, but once over the pass, it is largely freewheeling to Lawrence.

Yes, it was wet and cold but looking back on those three days, not even seriously inclement weather could dampen my enthusiasm. It was a glorious and memorable ride, through picturesque places and, despite the chilly challenges, it was easy.

The two-day, 73km Clutha Gold Cycle Trail is rated ‘easiest’ and ‘easy’; the one-day, 34km Roxburgh Gorge Trail is also rated ‘easy’ with only a small section at ‘intermediate’ grade.

• Taking a short river cruise down the Clutha will provide another perspective on the landscape.

• Central Otago is rich in history. Several sites relating to the region’s gold mining past include the opportunity to pan for gold and museums in Alexandra, Clyde and Roxburgh are well worth visiting.

• At least 50 of Lawrence’s buildings are protected historic sites. Take the heritage trail and uncover the town’s intriguing past.

• Roxburgh is famous for its stone fruits, strawberries, apples and pears. At the right time of year, buying fresh from the orchard gate is a pleasure best experienced from a bicycle.

• Craft and art galleries and artist studios are a feature of Central Otago: visit in Alexandra, Clyde and Roxburgh.

Summer visitors get apricots and cherries, autumn provides a spectacular show of deciduous trees in colour, winter is beautiful in its own snow-tinged right and spring is blossom time. Pick up a NZ Cycle Trail Guide from an AA Centre.

Reported by Elisabeth Easther for our AA Directions Autumn 2021 issue

The entire family can enjoy the dog-friendly Nydia Track.

Back in the saddle

Barney Irvine returns to cycle commuting, after a long break.

See nzcycletrail.com for details and maps. Pick up a NZ Cycle Trail Guide from an AA Centre.