Rose shows me how to fillet a fish. Beside us, Captain Bill works quickly through a chilly bin of blue cod: slit, slice, slip off the skin. Easy.

Like Bill, Rose is local. She grew up a few bays around from French Pass; she went to school in a little building around the corner from where we stand in the shade, filleting fish or, in my case, mangling fish. I decide the cod is too precious and give up. Bill has it sorted.

He’d helped us on the boat, too – chopping up bait, unhooking undersized fish, de-tangling lines. He’d steered Te Aumiti through the bubbling, boiling chaotic waters between French Pass and d’Urville Island, finding the best spot to put our lines out. 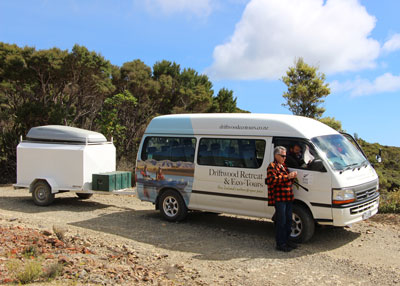 We’d fished on the first day, too. A van load of us – nine in total – had driven from Blenheim with Driftwood Ecotours, over the winding road from Rai Valley, gasping at the views and filled with anticipation. Along the way, the stories began of life in The Sounds, how Rose’s family had farmed here and how Will, her husband, had taken to the place. Now the two of them were our hosts for five days.

At the tiny township of French Pass, Will drove the van onto a car ferry for a 30-minute journey across to d’Urville Island. Our gear unloaded, the van parked, we boarded a water taxi and in brilliant introduction to this special place, detoured through the pass for a quick spot of fishing.
The cod sure were biting! We soon had enough.

Base for our five days on the island was the Wilderness Resort in Catherine Cove, where a handful of cabins shone in late afternoon sunshine. Close by was a large dining hall and bar. That first night’s meal, fresh blue cod, big salads and apple crumble, was typical. Every day we were plied with delicious, home-made, healthy food.

Weka tiptoed around an outdoor fireplace. We joined them, sitting with glasses of wine to watch the orange sky settle and the lodge’s long wharf darken in the closing day. Soon after, morepork started calling and a billion stars blinked on.

D’Urville Island is home to five or six permanent families – about 50 people, all up. There are a few holiday homes and people like us who are fascinated by its history, remoteness and wildlife can find a bed at the lodge or at a rented bach. It’s not particularly easy, though. Having all the logistics of the visit – getting there, getting around once there – taken care of by Will and Rose, made the adventure viable. They knew the place and had the connections.

Getting to meet local Jeanette Aplin, for example. She was waiting for us at the island’s community hall, built from power poles, to tell us about a stoat trapping project.

We were also keen to hear about her previous life as a lighthouse keeper’s wife, which she details in highly compelling books she proceeded to sell signed copies of. Jeanette was 23 when she went to nearby Stephen’s Island, a rock which makes d’Urville look positively cosmopolitan. She talked of that challenging life and then of moving to Dog Island in Foveaux Straight before heading back to Stephen’s for another five years with her family.

Now she lives on d’Urville and why wouldn’t you, if you could?

After sharing a cup of tea with Jeanette and donating to her trapping mission, we ventured on to Moawhitu Bay, or Greville Harbour, where a lake pocked with ducks and swans and surrounded by massive cabbage trees and koe koe lies behind sand dunes. A tsunami which shifted the sands, changing the lagoon to a lake, is remembered in Māori storytelling.

Further along the cove, we ventured onto the airstrip – a band of grass slightly shorter than the rest – and walked through the dunes to an ocean beach strewn with driftwood and flotsam.

Back at d’Urville’s main wharf our water taxi was waiting. The wind was up and mad whirly funnels of water flew across the surface of the sea. Suddenly a pod of dolphins appeared beside us, swooping, dancing and cavorting with the boat’s wake. 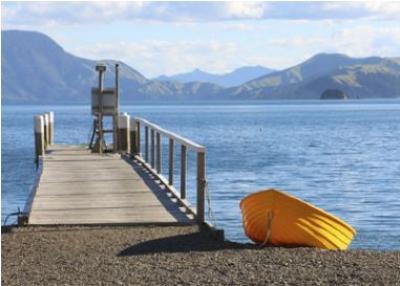 The wind blew into Catherine Cove all night and the next day’s plan to take a boat trip had to be postponed. Instead we walked up high behind the resort, climbing past rugged low bush into beautiful tracts of old trees. We spotted a tiny rifleman, several bellbirds, and soaked in glorious views far and wide, above the bay, across to the mainland, to steep farmed peninsulas with swathes of green right down to the coast, dotted sparsely with cattle.

Bill Webber picked us up the following, calm morning to show us the land from the sea. He pulled in around the corner from Catherine Cove at Whareatea where Captain Cook spent a week, in 1770; a small plaque commemorates the fact. A few bays along a waterfall dropping straight into the sea is said to have replenished his fresh water supplies before he left for home.

The stories of the island stretch back. They range from Captain Cook to first settlers, from fishing legends and ship wrecks to Dumont d’Urville the explorer who, in 1827, watched the dangerous French Pass (or Te Aumiti) for several days before risking the run through it, and still hit the reef. We heard about the mysterious old man watching d’Urville’s progress, cursing him.

On the last day we visited Sue and Terry’s home on a lifestyle block on the south end of the island. They grow every imaginable vegetable, fruit and nut trees, keep chooks and fish for cod within coo-ee of their front door.

Then we were back on the mainland and Bill was filleting fish for us to take home. Then in the van again, driving back to Blenheim, the adventure over. We stopped for a final cuppa together; Rose and Will unpacked thermoses and cups, sandwiches and home-baked biscuits and muffins. And we stood around the picnic table enjoying each other’s company one last time.

What were our personal highlights? For some it was bush walking, bird-spotting, meeting local islanders, seeing Stephen’s Island up close. For others it was walking over the dunes at Greville Harbour, looking for nautilus shells. For me – well, it was a hard choice but I’d have to say the dolphins.

From Blenheim to French Pass village is 125km. From Rai Valley the road is winding but sealed and very scenic.

Staying there
Wilderness Resort has beachfront units and self-contained baches for rent and a licensed café and bar. Guests can take walks, encounter native birds and sea life, take diving or fishing charters, visit nearby waterfalls and swim.

In the region
In Havelock, stop at The Mussel Pot  for a feast of local green-lipped mussels.