I start my Grand Tour at Zurich by catching a ride in a hefty Tesla X, piloted by a couple from Frankfurt. We’re heading to the start of the WAVE electric car rally that will follow the E-Grand Tour route.

Willy, the driver asks, “Would you like to observe the car’s acceleration?”

Why not? It’s my first time in a top-of-the-line Tesla. I expect an orderly sine curve of acceleration – but Willy is an Autobahn-bred German, not Swiss, and is proud of his new toy. We’re on an empty parkland street. He tickles the throttle. Boom. The take-off is stunning – more Enzo Ferrari than Nikola Tesla.

My body imprint, I think, remained indented on the seat upholstery.

The eight-day WAVE rally, or World Advanced Vehicle Expedition, is a tour, not a race, for pure electric vehicles (no hybrids) and the 112 participants in this fleet range from standard Opels, Hyundais, Teslas and similar, to converted classics like a Citroën 2CV and VW Kombi.

Add Johammer e-motorcycles, Stromer e-bicycles and a gaggle of three-wheeler Twikes and it is a colourful if not eccentric international field. The rally director, Louis Palmer (the first man to drive around the world in a solar-powered vehicle) flags the fleet off. Ahead lie the mountain passes, villages, hydro dams and smart cities of the Grand Tour.

The route runs, fittingly, like Swiss clockwork. The Grand Tour’s 650 distinctive, red way-marker signs are oriented for a clockwise progression, although it can also be done in the opposite direction.

More than 100 hotels have their own charging stations and dedicated Grand Tour guidebooks, maps and a website are available. 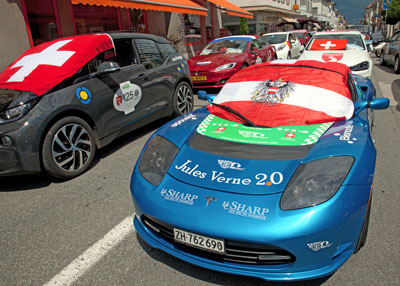 Graubünden, the large, south-eastern canton through which the Grand Tour passes, is home to resorts made famous by aristocrats and plutocrats. The first town, Davos has an impressive cable car that whisks summer hikers and winter skiers up to the heights of Jakobshorn Mountain. I emerge onto a plateau amid the pine trees above Davos. From here it is an easy one-hour hike up to Clavadeler where a rustic cheese factory and restaurant perch on the side of the mountain. Beef carpaccio, dry-cured ham and homemade cheese, all enjoyed in the summer sun at 1,970 metres, are a signature Swiss alpine lunch.

When the WAVE rolls on from Davos next morning I travel aboard a new Opel Ampera-e with the rally operations manager, Didier Klement. He tells me that his vehicle cost 42,000 Swiss francs on the road – around NZ$60,850 – adding that electric car prices in Switzerland are now at parity with equivalent diesel models. With its snow-dome peaks, larch forests and chlorophyll-green pastures, Graubünden at times appears too picturesque to be real. If it seems like being in a Heidi theme park, that’s because several Heidi movies have been filmed here.

St Moritz is the next major stop on the Grand Tour. While rally cars and their drivers recharge overnight, a few of us head uphill aboard a mountain climbing funicular to Muottas Muragl peak. Over cocktails and dinner at 2,545 metres we gaze down on the town and valley so far below that it all resembles a toy diorama.

Next morning, some of us briefly shift from e-cars to e-bicycles, cruising around Lake St Moritz. It’s another first for me and one that, I fear, I might never willingly recover from. To roll almost effortlessly uphill, pedaling casually, while enjoying a mountain forest trail beats hands-down – I assure you – the sweating, lung-burning, unassisted alternative. 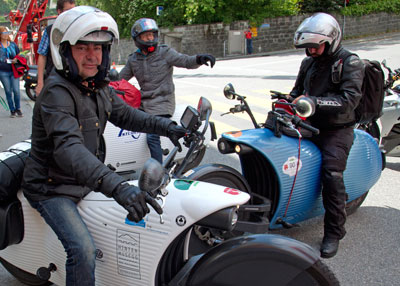 The Grand Tour route winds on amid the 200-million year old upheaval of the Swiss Alps. The valleys are dotted with church spires and pocket lakes, while the passes almost rattle with history. We cross the 2,284-metre Julier Pass that the ancient Romans used when marching from Italy to Germany. Still visible, some 2,000 years on, are the half-metre deep ruts gouged in the bedrock by the iron wheels of countless Roman legion baggage carts.

Up the road from Thusis is the fearsome canyon of Viamala Gorge, a deep, steep fissure that medieval travellers had to descend on foot and then re-ascend. So infamous was the place, that its name in the local dialect was Viamala: Bad Path.

The next Grand Tour stop, San Bernardino, is considerably sunnier. Here, I join up with brothers Chris and Rudolf in their Tesla S. Almost silent, vibration-free e-cruising takes a while to get used to, not to mention the lack of gear transitions. Everything’s perfect and then, after you get over the ‘gee-whizz’ phase – it must be said – it’s perhaps also a tad boring! 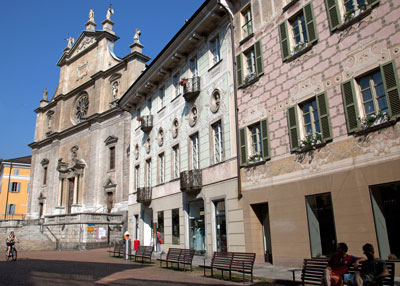 We descend the Alps to historic Bellinzona, capital of Ticino canton.

“I’m not sure where the hotel is,” Chris says. “Not a problem,” his brother replies. “Tesla will.” And sure enough, the large dashboard computer screen is soon enunciating like Big Brother the optimal route to our lodgings.

Our fleet of colourful e-cars enters under a large ‘Arrival’ archway, making a dramatic contrast to the medieval surrounds. Bellinzona, situated at an Alpine pinch-point, bristles with splendid, UNESCO-listed castles and city walls, all built to control passage from both the south and the north. Armies were halted here, and taxes and tolls collected.

My last stop on the Grand Tour is Locarno, Switzerland’s surprise version of the tropics, complete with palm trees and the azure waters of Lake Maggiore. Its arcaded Piazza Grande, one of the Swiss Federation’s most famous old town squares, has never seen anything like it: electric vehicles rolling onto its cobbled acres, where cables are pulled out and drivers start silently watering their virtual horses from discretely located super-chargers. The future is in town.

Reported by John Borthwick for our AA Directions Summer 2018 issue

The Switzerland Grand Tour can be done by car or motorcycle. Allow at least three days to sample it in part and up to eight days for the full circuit. April to October is the best time, with some mountain passes only accessible during summer. The writer travelled courtesy of Swiss Tourism and SWISS International Airlines.

See MySwitzerland or Wavetrophy for more. Arrange travel insurance  before you go.