Portland is used to being misunderstood. It’s rainy, the traffic can be challenging and it’s a bit too show-offy about its cool cafés and craft breweries. Within five minutes of arriving, I’m reminded of the TV comedy show Portlandia which good-naturedly mocked the city’s hipster credentials.

But Portland is more than just cool people doing cool things: dig a little deeper and you’ll find a fun, defiantly-alternative city with swathes of green spaces and numerous ways to enjoy them.

The first thing I do in Portland is the first thing everyone should do when they get here: head to the Willamette River which slices through the city, dividing it into ‘this side’ and ‘that side.’ This side, where I spend most of my time, is the west bank which captures downtown Portland, as well as most of the city’s tourist-friendly attractions.

‘That side,’ east of the river, might be more industrial, but it’s also home to many craft breweries, independent restaurants and indie boutiques. A total of 12 bridges fling themselves across the murky river, making it easy to negotiate both this side and that.

It helps that Portland isn’t one of those hard-to-negotiate urban sprawls: it takes me about half an hour to walk from Chinatown in the north to the cultural district in the south, and that includes time spent window shopping.

I had planned to hire a bike – Portland is one of the most bike-friendly cities in the US and its residents are among the country’s most enthusiastic bike commuters – but then it started to rain, so I changed my plans to indoor ones. Fortunately, Portland has lots of places to wait out the drizzle including more than 3,000 quirky cafés.

Another place to go when the weather isn’t playing nice is the largest independent bookstore in the world – Powells City of Books. I’m a reader but even if you’re not, this enormous store, which sprawls over an entire city block, is worth a visit just to see how they’ve wedged more than two million new and used books into 3,500 sections across three floors (thankfully, they supply maps.)

This is the Pearl District, a former industrial area which gets its name, depending on who you believe, from either the Chinese seafarers who were said to hide pearls beneath the cobblestones last century or the oyster-canning factory which once sat amidst the area’s ageing warehouses. Either way, today the neighbourhood is home to hip boutiques, cafés, galleries and cocktail bars which gladly relieve me of my cash.

When a city’s unofficial motto is ‘Keep Portland Weird’ you can be sure it won’t be like other US cities.

From the local who likes to dress up as Darth Vader and play the bagpipes while riding his unicycle to a vegan strip club, or museums dedicated to vacuum cleaners, BMX bikes and kayaks, this city of almost 650,000 people definitely rates high on the quirk meter.

I can’t vouch for those other museums but I can recommend the Portland Art Museum, the oldest of its kind on the west coast. Founded in 1882, it spans two buildings connected by an underground walkway. The art here is as eclectic as the city, ranging from Native American, Asian and contemporary art to photography and film and easily fills in a few hours. 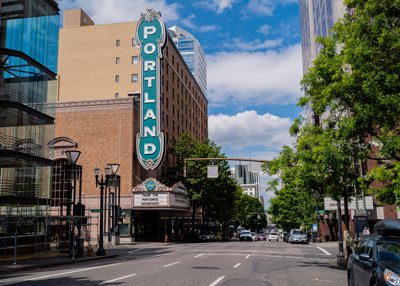 Ample rainfall equals lush green spaces and Portland isn’t short of them. One of the best is Washington Park, a 410-acre space criss-crossed with biking trails and hiking paths, along with the Portland Japanese Garden, considered one of the most authentic Japanese gardens in the world outside of Japan. I spent a Zen hour strolling the gently curving pathways dotted with vivid Japanese maples, delicate cherry trees and shimmering ponds teeming with koi and then headed to the cultural village where an origami demonstration was taking place.

Next door is the International Test Rose Garden. The story goes that during WWI, a local persuaded the city fathers to establish a rose test garden to preserve European roses at risk of being wiped out by bombings. Today this fragrant expanse has more than 7,000 bushes.

But a girl can’t live on roses alone, so I head downtown to one of the permanent ‘pods’ of food carts parked in carparks around the city. This is street food at its best – everything from noodles and dumplings to vegan and keto offerings. I join the ever-present queue for Vodoo Doughnuts, a cult store which started as a tiny hole-in-the-wall shop and has now expanded to eight locations in five US states. Like so much of Portland, don’t come expecting the ordinary – deep fried and baked offerings here include a bacon maple version which, as the name suggests, comes with maple icing and slices of fried bacon.

After food, comes beer. One of Portland’s claims to fame is that it has one of the highest number of breweries per capita of any US city (around 70+) so knowing where to start can be tough. I sign up for a Brewvana tour, a four-hour journey which takes us to various established and newer craft breweries to sample their wares and meet the brewers.

I can’t tell you which were good and which weren’t because I can’t read my notes but I can tell you that, like so much of Portland, it was a lot of fun.

Reported by Sharon Stephenson for our AA Directions Autumn 2020 issue

See AA Traveller for more travel inspiration. The writer travelled as a guest of Trafalgar Adventures on the Pacific Northwest 11-day tour.