With an almighty roar the jetboat lurches suddenly forward and Queenstown’s majestic landscape disappears behind a blur of grey.

Blitzing up the canyon the great wide open is quickly replaced by looming cliff faces that stand resolutely stationary and shoot past uncomfortably close. Their deadly stillness highlights our reckless speed.

The woman on my left shrieks. On my right the cold blue of the Shotover River splashes up into my face. I think I’m having fun but we’re going so fast it’s hard to tell.

Most people come to Queenstown for the skiing. I’ve come to leave. Once I’ve dried off I’ll be heading to nearby Cromwell.

It used to be that this small town was only famous for its proximity to the playground of the South. Rather than fighting that concept, Cromwell’s embraced it, capitalising on the fact that it’s only 45 minutes away and fast becoming a destination in its own right.

Positioning itself at the boutique end of the market, Cromwell offers an escape from the crowded Queenstown streets and their accompanying raucous party vibes. If partying's what you’re after, there’s nothing for you in Cromwell.

It’s quiet, peaceful, slow. Well, it is as long as you’re not strapping yourself into the front seat of a tricked-out Porsche Cayenne at the Highlands Motorsport Park. Then Cromwell is a very different place indeed: it’s loud, aggressive, fast.

We’re tearing around the racetrack doing what’s known as a ‘hot lap’. This mainly involves sitting in the car and trying to keep your composure as one of Highland’s pro-drivers hoons it around the bendy four kilometre racetrack at stupendous speed.

The needles on the rev counter and speedometer oscillate wildly, manically jerking from zero to max constantly, as we clinically tear down long straights and get expertly thrown around corners and turns. Each bend sends the view sliding giddily in front of us, generating violent protest from the screeching tyres as they battle against the overwhelming momentum to keep us locked on the track.

After that, it’s our turn… sort of. Pulling on a racing helmet I climb into a go-kart that’s humming patiently on the starting grid of the park’s dedicated kart track. 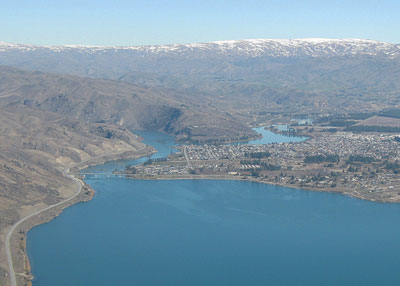 When the green flag drops I put pedal to the metal and zoom off. Bobbing and weaving through the mob of fellow racers I eventually end up in a fierce fight for first place.

However, my rival shows serious skills, swatting away all my overtaking manoeuvres and leaving me to sail into second place. I feel robbed until I learn that he’s a semi-pro local jetboat racer.

Even though skiing is not on the agenda, you can’t come all this way and not spend any time playing in the snow. So after a morning’s motorsport, I take to the sky.

In a rock star moment, a helicopter picks me up from the restaurant.

In what will no doubt end up being one of my life’s more rock star moments, a helicopter picks me up from the splendid Mt Difficulty Winery where I’m having lunch.

Making my way to the waiting chopper I notice a hushed chatter as the other diners try to sneak a peek and work out if I’m anyone notable. I’m not, but lifting off it’s certainly hard not to feel a million dollars.

Soaring over the manmade splendour of Lake Dunstan towards the craggy marvel of nature’s hard forged, snow-capped ranges is a privilege for the eyes.

The snow at our landing spot on the Pisa Range is only accessible by ‘copter and is absolutely pristine, blindingly white against the sharp blue of the day. We mooch about up there for a bit, taking photos and gaping at the picture-perfect vistas that stretch out endlessly in all directions. I throw a snowball at a fellow passenger.

Shortly after, a nice walk is ruined by my repeated attempts to hit a very small ball into a series of very small holes.

Displaying a natural flair for sending my ball flying haphazardly off the fairway and an innate ability to putt around the hole, my time at Cromwell Golf Club course is mostly spent wandering around looking for my ball.

Another big positive of Cromwell is the proliferation of quality restaurants. It’s been a big day and as I’m extremely keen to sample the local reds, we choose to dine at The Moorings, which is right on Lake Dunstan and a part of the Boutique Heritage Lake Resort where we are staying. This way, no one has to drive.

Unlike Queenstown which stays lit up and bustling until the wee small hours, the cold night drops quick and black in Cromwell. But tucking into a hearty steak, quaffing a delicious Pinot from the local Mt Michael winery and being warmly ensconced in the cosy pub atmosphere there’s absolutely no incentive to leave. So we don’t.

Eventually last orders are called and we leave on  wobbly legs to walk the short few steps to the room, where a warm bed and heavy eyes bring an end to my adventures in Cromwell.

Reported by Karl Puschmann for our AA Directions Spring 2020 issue

Monica Tischler goes to what feels like the edge of the earth to experience the magic...