If there’s ever a place in the world for women to carry crab measurers in their handbags, it’s Newport, Oregon, USA.

I’ve arrived in the ‘crab capital’ right on time. It’s January, the middle of America’s winter, and the fishermen have just begun their first haul of Dungeness crab for the season.

Having never eaten the delicacy before, I decide on dinner at Local Ocean Seafoods, which serves up the season’s catches and has residents flocking in.

It’s a moody night. A passer-by tells me a storm’s on its way. Darkness falls quickly over the small village. The Yaquina Lighthouse, the tallest of nine on the Newport coast, is barely visible under rolling fog. There’s a bitter wind whipping through which carries the aroma from fishing trawlers docked nearby. The bark of sea lions, paired with the raucous laughter of men enjoying a beer in Rogue Ales Public House down the road, makes it a noisy night.

The restaurant is a cosy haven. As I try to dismantle my crab in as ladylike a fashion as possible, a woman beside me notices my struggle. She shows me the right techniques to remove the delicate white flesh from the red shell. When I ask about size limits, she reaches into her handbag and whips out a plastic measuring claw.

I make a joke but then learn it’s a vital tool to have on hand in this part of the country. She tells me it’s common for locals to pop down to the waterfront after work to check their crab pots. Weekends are spent with friends and family around a barbecue, sharing good times and seafood. In true American style, crab season is celebrated well.

Wine is another delicacy Oregon does well. The next morning, my sister Kerry and I head for Dundee Hills in the Willamette Valley, also known as wine country. Travelling east across the state towards Portland, the overnight rain has frozen on the pine trees. Known as silvering, a layer of frost has crusted over the brittle tree branches, creating a beautiful shiny film over our surroundings.

Our first stop is Sokol Blosser Winery. Looking out over vineyards, we hear how the valley was carved when glacial Lake Missoula began to melt hundreds of years ago. The ice broke several times over the years, driving in rich soil and creating a steady temperature, perfect for growing grapes. There are now more than 500 wineries in the region.

Blackberry bushes line the roadside on the way to Argyle Winery. While seafood is plentiful in winter, come summer the  attention turns to the local pear, walnut and hazelnut orchards and farms offering pick-your-own raspberries and blueberries.

We buy a bottle of wine and take it back to the quaint Black Walnut Inn. Grabbing takeaways from the boutique Red Hills Market, we settle in front of the fireplace for the evening. 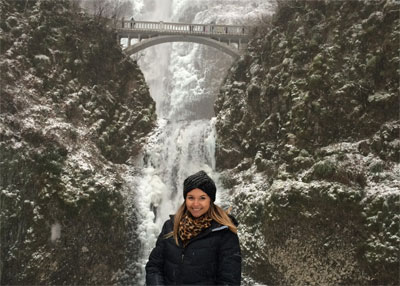 Unfortunately, a cold that Kerry has been trying to keep at bay progresses overnight. Our first task when we reach Portland in the morning is finding a doctor.

We check in at Ace Hotel and the staff book an appointment for us. On our way to the clinic, we chat to the Uber driver about everyday life in Oregon.

He tells us about the Urban Growth Boundary which limits how far city growth can sprawl into rural areas to preserve forests and parkland. His family chooses ‘staycations’, not vacations, meaning they go camping and hiking in their own state, rather than travelling elsewhere.

I brave the falling snow as Kerry rests at the hotel. The scent from Stumptown Coffee Roasters next door lures me in. A snowman waits on the footpath outside. Portland’s caffeine is a welcome relief after our last call, Los Angeles, where a good coffee was hard to find. I join the crowds of city-goers and dogs being walked in their own miniature woollen coats, through alleyways and arcades, past food trucks and bookstores, home to those with time to relax.

An inky sky seeps into the afternoon. I find an organic food store and select fresh fruit and vegetables for dinner. Loaded with brown paper bags, I trudge back through the snow that’s thickened throughout the day, feeling very much the Portland local.

The hotel phone wakes me and I manage a sleepy “hello?” David, owner of America’s Hub World Tours, is showing me the Columbia River Gorge National Scenic Area, or ‘Waterfall Lane.’ We need to leave early to combat the heavy snowfall.

Eyes peeled for elk, I marvel at the silvering on cottonwood trees lining the scenic highway. I note how pristine the surroundings are and David mentions the region’s ‘no commercial growth’ law. Billboards and advertising hoardings aren’t allowed on the roadside, to preserve the area’s natural beauty. It certainly proves effective; I’m hard-pressed to think of anywhere more beautiful.