Full on fun in Gisborne

Elisabeth Easther and her son get super active in Gisborne.

Travelling with a 13-year-old, I was mindful of the fact that we couldn’t just look at things, we had to do things too, which made Gisborne the perfect place for a holiday because it’s brimming with activities.

First up, we hired bikes and rode around town to get our bearings. Past pretty settlers’ cottages we rode, the chimneys puffing wood smoke into the afternoon.

Following the banks of the picturesque Tūranganui River we quickly arrived at the coast, where the region’s history is proudly displayed.

We pedalled past Captain Cook astride his globe and then, further along Waikanae Beach, to see Young Nick, the surgeon’s boy, also depicted in bronze. As the first of Cook’s crew to sight land, the sharp-eyed child was rewarded with a gallon of rum and, a more lasting honour, the naming of this piece of coast: Young Nick’s Head. We continued along wide beachside boulevards before returning to the reedy river where pied stilts and pūkeko observed the setting of the sun, warily watching for the storm that was brewing.

In spite of inclement weather, we were determined to visit Mount Hikurangi, the first place in the world to see the sun. Instead of trekking up the mountain at dawn, Theo and I opted for a daytime excursion with tour operator, Maunga Hikurangi. We drove the dramatic coastline, pausing at Tolaga Bay’s historic wharf to watch patient surfers wait for the perfect wave. Having heard rave reviews about the pāua pies at Cafe 35 in Tokomaru Bay, we pulled over to find out what all the fuss was about. Accounts of their deliciousness were not exaggerated.

At Ruatōria, we abandoned the coast and wound our way up a valley where hawks challenged us for roadkill and robust cattle grazed on lush green grass. We parked at Te Ara Ki Hikurangi to begin our tour of this sacred site, transferring to a six-seater Can Am to do so. Our guide, Monty Manuel, tasked with sharing stories of the land and his people, the Ngāti Porou, made smooth work of the rugged route. We stopped at a flat ridge where nine carved whakairo, an imposing circle of ancestors, stood sentry below the peak. Monty walked us around and talked about this place of great spiritual significance as the clouds lifted and breathtaking views to the vast Pacific Ocean were revealed.

To mark our visit, a harakeke was planted and a picnic was shared. When distant stags roared in the valley and the clouds returned, it was time to make tracks.

One of the Tairāwhiti region’s newest tourist attractions is Gisborne Railbikes. When former farmer and boat builder Geoff Main noticed that the rail line connecting Palmerston North with Gisborne was overgrown, an idea was kindled: would it be possible to recommission the line and run bike tours on it? After several years of hard slog, Geoff’s quirky concept was realised and the first fleet of railbikes pedalled out to the coast last summer. With Geoff in the lead, we mounted elegantly engineered side-by-side tandem bikes. Riding along the pastoral route, we passed small groups of goats and solitary pheasants. We rode over bridges and through corridors of toitoi, the feathery fronds reflecting the sun’s rays. From mossy bridges to groves of fruit trees presumably propagated from the pips of passengers past, our convoy finally emerged from a one-kilometre-long tunnel to behold the spectacular coastline. The trail is currently 32km return; the plan is to continue all the way to the Māhia Peninsula and, as soon as that happens, we’ll be back to ride it because we were completely enchanted. 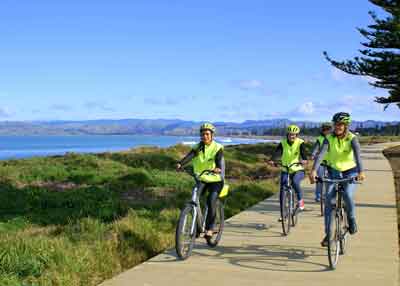 Just half an hour from the railbike terminus is the exquisite Eastwoodhill, The National Arboretum of New Zealand. This treasure trove of trees was more my cup of tea but I lured the 13-year-old with a tale. The man responsible for creating Eastwoodhill was Douglas Cook, a returned serviceman famous for gardening in the buff, save for a single gumboot that he wore on his digging foot.

After witnessing the horrors of World War One – he was wounded three times and blinded in one eye – he came back to New Zealand and immersed himself in nature. Featuring a mixture of native and exotic planting, when we visited the landscape shone in shades of ambers and greens. A particular highlight was a mighty cypress. Signage suggested visitors lie at the base of the trunk and look up, which I did, and wriggled my way round like the hand of a clock. Cool earth, fresh air, trees looming as glimpses of clouds scudded across the sky – as I orbited the base of the tree, I silently thanked Douglas for having created such a perfectly peaceful place.

There was one more experience we really wanted to have: a reef ecology tour. Arriving at Dive Tatapouri’s beachside HQ at 8:30am, we donned waders and, furnished with bamboo staffs for balance, we were led across the reef to marvel at kingfish and rays. Keeping our fingers curled into fists, lest the kingfish dine on our digits, we fed these fabulous creatures as they swum round our legs. A lone octopus decided it was all too hectic and tried to make a getaway up my bamboo staff. When he realised that wasn’t wise, he vanished as quickly as he’d appeared. The star of the show was Tara, the heavily pregnant stingray who weighed an estimated 200kg.

We could’ve waded with these magical creatures all day but, with the tide coming in and our plane flying out, there was no time for long goodbyes and before we knew it, we were on the plane, gazing down upon glorious Gisborne.

Reported by Elisabeth Easther for our Win with AA Directions issue