Going with the flow

Derek Grzelewski gets nostalgic on the Alps to Ocean ride, AKA the A2O.

It’s been suggested that it’s the bicycle — not the iPhone, space shuttle or even the silent dishwasher — that is Western civilisation’s highest technological achievement.

The benefits are immeasurable: the fresh-air fitness and the wind in your hair, the scenery and peace, and the sheer pleasure of flowing along the trail at speed, leaning into corners, feeling your lips getting tired from the perpetual grin on your face.

When I moved to New Zealand in the mid-1980s, a mountain bike was one of the first things I got. I fitted it with panniers, a small tent and mobile kitchen, and clocked over 10,000km touring, ostensibly to choose a place to live. This was how I first saw this land, and how I first came to Aoraki Mt Cook.

So there is a memory-lane element to being here, looking at the mountain from a bike again, to sample the pleasures of the 300km Alps to Ocean Trail (the A2O) connecting Aoraki with Oamaru, flowing as the water does, from the mountains to the sea.

The original trailhead is near Mt Cook village but after the first few kilometres the journey involves a scenic, if pricey, helicopter hop across the Tasman River. Since I’m riding on my own, I opt instead for a shuttle drop-off on the eastern side of the river. As the shuttle bus leaves, the silence returns. There are only the mountains, the surreal blue of the glacial lake and the road ahead. I clip into the pedals and soon find the familiar cadence of a distance cyclist.

My bike, with disc brakes and full suspension, is several generations up from the original clunker I once rode, unlike the body which is somewhat downgraded from its youthful self by the intervening three decades. But the grin is the same and so is the riders’ high.

The trail follows the eastern shore of Lake Pukaki; the imposing form of Aoraki, at times reflecting in the turquoise lake, is my constant companion. There is an alternative start to the A2O cycleway in Lake Tekapo township, under Mt John Observatory, where white domes of six telescopes protrude from the tussock like giant puffballs. The two gravel-road trails merge part way along the lake and, near its southern end, a purpose-built cycling trail begins.

Once on that single track and away from the road, the riding gets even better. This is what a mountain bike was made for! Fat, knobby tyres bite into the trail, but the dual suspension adds a sense of floating over the ground. I’m taking regular sips from my water bottle, watching the speedo readout hovering around 20km/h. I know my legs will suffer tomorrow, but for now flying along the trail is too much fun to be thinking about such a distant future. In late afternoon, I land in Twizel, happily exhausted. 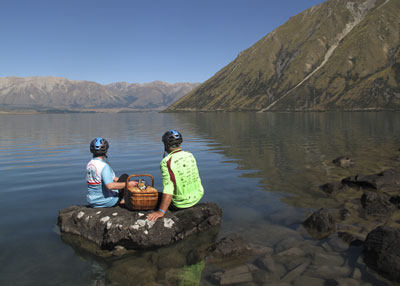 “Most riders choose a lot more leisurely pace and we certainly encourage that as there is so much to see along the way,” Shell Paterson tells me there. With her partner Stu, she runs a local service which provides logistical support along the A2O. “The trail has brought a whole new vibe to the little towns along its length: new cafés, funky places to stay, no end of cars carrying multiple bikes and a lot of active, enthusiastic people. We get entire families cycling the whole trail over a week. It’s inspiring to see and be a part of.”

Ouch! My quads are less inspired first thing in the morning, but they soon warm up into an easy spin as I ride a mix of gravel roads and trail to Lake Ohau, then on to Omarama, another solid day’s ride. Here the A2O turns east and down the Waitaki valley, meandering along the shores of lakes Benmore, Aviemore and Waitaki, taking in the Elephant Rocks and the Maori rock art site near Duntroon, the Vanished World of fossilised giant penguins, dolphins and an old railway tunnel and, finally, the Victorian historic precinct of Oamaru to finish at Friendly Bay and the Pacific Ocean.

At Omarama, alas, it’s time for me to part with the trail and I retire my steed to its towbar bike rack and continue home by car. Parts of the A2O are still on roads but eventually the entire cycle way will be a custom-built, off-road trail, including a section through the Lake Benmore narrows which alone will be worth coming here to ride. Don’t be intimidated by the length of the trail and the time commitment required. You can, like I did, ride the sections that take your fancy and arrange the logistics accordingly.

Ride for a week, a day, or just a couple of hours, but ride. Beyond its marvels of energy efficiency, a bicycle is also a remarkable mood changer. Arthur Conan Doyle knew his stuff when he wrote: “When the spirits are low, when the day appears dark, when work becomes monotonous, when hope hardly seems worth having, just mount a bicycle and go out for a spin, without thought on anything but the ride you are taking.”

Along the A2O his spirits would have soared.

Reported by Derek Grzelewski for our AA Directions Autumn 2020 issue