There was a three-quarter moon rising over Mt John, dubious conditions for viewing Tekapo’s world-renowned night sky. But the observatory road had been closed for days due to heavy snow, and our window had narrowed to this single, mid-winter evening. It was now or never.

As our bus arrived at the summit, it became apparent this untimely moon had a silver lining. Under its glow, the snow-blanketed Mackenzie Basin shimmered with an electric, otherworldly magic.

However much we saw through the telescopes during the next couple of hours, we’d already been transported to another planet.

Set at 1000-odd metres above sea level, Mt John’s summit has been home to the University of Canterbury’s astronomy mission since 1965, following a wide-ranging search for a site by Canterbury and its founding partner in the observatory, the University of Pennsylvania. Tekapo won on the strength of its relatively high number of clear nights, and the absence of significant light pollution.

By the 1980s, as those pristine sky conditions became threatened by Tekapo’s development, the district council introduced an ordinance to curb the impact of the town’s lighting. It was a remarkably far-sighted move, and it set the scene for today’s booming astro-tourism industry.

“Later, the whole world looked at little Tekapo and said: ‘How did you do that?’, because by then pretty much everyone else had left it too late; their night sky was gone.”

That immaculate firmament was recognised in 2012, when a 4,300km slice of the Mackenzie Country and Aoraki Mt Cook National Park was designated an international dark sky reserve, the first in the world with gold-star status.

For tourism operators in Tekapo, the endorsement by the International Dark Sky Association has been a massive shot in the arm. Murray, who early on encountered some skepticism about his venture, says stargazing is now among the main drivers for Japanese visiting New Zealand. 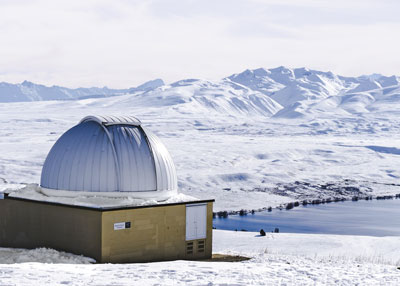 “Fifty per cent of the world’s population has lost contact with the stars – that’s immense,” he remarks, adding that overseas visitors to Mt John can be overwhelmed by the sight of the blazing heavens.

“The difficulty now is how do you give great numbers of people that same experience, a once-in-a-lifetime chance to bond with the stars?”

It was a good question to ponder as our guides led us by torchlight to the summit, where a handful of observatory domes emerged from packed snow.

There are five telescopes at Mt John, the largest of which is the 1.8m diameter, Japanese-built MOA scope, tasked with hunting for dark matter and extra-solar planets. Using a technique known as micro-lensing, which relies on the gravitational bending of light, astronomers have discovered a handful of previously unknown planets with MOA, including an icy ‘super Earth’ near the centre of the Milky Way.

We didn’t exactly smoke out any new planets on this evening, but over the next hour or so, through various telescopes, we were treated to quite a show. There were sightings of Jupiter’s Galilean moons, which when discovered by Galileo Galilei became the first objects found to orbit another planet. We had views of the ‘Jewel Box’, one of the youngest star clusters at a mere 14 million years. We saw the Magellanic Clouds in all their glory.

Yet the highlight was nothing more exotic than a view, through an immensely powerful telescope, of Saturn.

According to our guide, Chris Murphy, it was a perennial favourite with visitors. “It’s what everyone expects a planet to look like, I guess. A stunning object.”

Chris, a skilled astrophotographer and an astronomy enthusiast since seeing Halley’s Comet as a kid, asked us to guess the general thickness of Saturn’s famous rings. The unlikely answer was 10 metres – relatively speaking, paper-thin. We were only able to see them across the vastness of the galaxy because of angles and reflection.

Later, as we descended the hill in silence, that image of Saturn in the telescope came back: that pale orb in its wreathe of dusty ice, floating in the blackness of space.

Graeme Murray never tires of such sights. “We’re so privileged to live where we do,” he says.

A daytime visit to Mt John is also worthwhile. Drive or hike the 300m to the summit for views of the Mackenzie Basin, Southern Alps and Lake Tekapo.

Visit Tekapo Springs, a complex with several landscaped hot pools set above the lake, a sauna and day spa and, in winter, an ice skating rink. On clear nights the Springs offers a two-hour stargazing experience. Take the tour then spend time floating on a hammock in a 38-degree pool, taking in the star-powdered sky.

You’ll know Tekapo’s Church of the Good Shepherd when you see it ‒ it’s one of the most photographed sites in New Zealand. The pretty little stone church beside the lake attracts more than 100,000 visitors annually. Nevertheless, if you can time your visit right, it is well worth it.

See AA Traveller for more about Tekapo and to book accommodation.

Reported by Matt Philp for our AA Directions Autumn 2021 issue