Fiona Terry and her daughter hang out in the big smoke

I’d got it all planned...a whistle-stop adventure involving day-return flights, a tour of The Beehive, a few hours in Te Papa, a stroll along the waterfront and a little shopping. That was until 11-year-old Jasmine got whiff of an attraction around half an hour from the centre that would involve hanging out in trees. Porirua’s Adrenalin Forest was going to be an absolute must for our perfect day, or so she said. I re-jigged our itinerary, reluctantly crossing off ‘shopping’.

We made our way straight from our ‘red-eye’ flight to explore The Beehive and parliamentary complex before the city had properly woken. It was also before the official tours of the buildings would begin, though it was still impressive to view from outside. We took photos before heading for the train station, where we discovered that works on the line meant the route was being serviced by buses.

I wondered whether our detour from the city could be justified, but the look of delight on Jasmine’s face on first sighting Adrenalin Forest made it worthwhile. Ropes were suspended, some with barrels through which to climb, others with hanging hoops to negotiate. A number had rope-slung horizontal wooden crosses, and another featured what looked suspiciously like a skateboard.

We were fitted with harnesses and given a safety briefing. I was relieved to be told the magnetic carabiner system was specially designed so that of the two clips attached to our harnesses, only one at a time could be removed from the metal safety wires.

"We enjoyed ourselves so much we beamed the whole journey back to the city."

Having been given the all-clear to set off independently we embarked on the first challenge, which at this early stage promised to be no more than three metres high. Jasmine stormed ahead but slowed when she realised some daughterly advice from a well-practised tree climber would be helpful for her less experienced mother. The city seemed a world away as the sound of birdsong accompanied us on our high-wire adventures. 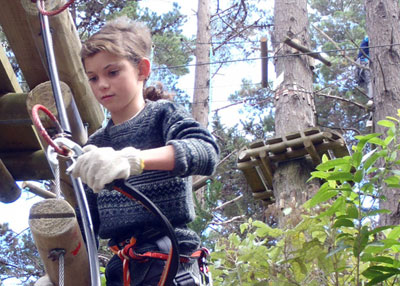 “Charlie and Dad would love this,” enthused Jasmine after swinging on a rope Tarzan-style into a giant cargo net. The well-marked courses of different challenges zigzagged through the forest. Occasionally our achievements were rewarded with an opportunity to speed down a portion flying-fox style using a device attached to our harnesses with a built-in wheel system. As our challenges led us higher, my adrenalin levels rose.
The place got busier – beneath us, also working their way up through the levels, were other families, couples on dates, and a group of young women on a hens' do.

After a couple of hours, and having completed the first three levels, my arms were signalling they’d had enough. Jasmine however, was keen to tackle level four, suspended fifteen metres high off the ground. It’s been known that even adults have had to be rescued by the skilled crew from this challenge but not our Jasmine. She completed the section quickly, including negotiating her way between treetops using what was indeed a skateboard contraption.

We’d enjoyed ourselves so much we beamed the whole journey back to the city. Rain greeted us as we made our way from the central railway station to Te Papa. In less than three hours at this inspiring museum we’d managed to go on a captivating journey through time encompassing millions of years.

We explored tectonic plate movements, volcanic eruptions, earthquakes, changing commerce, the environment, and encountered fierce and strange-looking creatures. By the time we emerged there was brilliant sunshine. The lack of overnight luggage helped speed our dash to the bus stop for our return trip to the airport, but the magic didn’t end there.

Lying in wait for us back at the airport terminal was something else to make our girls’ trip even more memorable for Hobbit fan Jasmine. We could easily have missed our plane, so keenly was she taking pictures and videos of the unnervingly life-like giant sculpture of Smaug, developed in conjunction with Weta Workshop. His mechanical eye eerily opened as if to survey her movements.

In the café, a giant Gollum hovered overhead and nearby Gandalf was swooping through on a giant eagle. This entertaining city had so much to offer – we’ll be back, but maybe next time with our boys.

Road report: The impact Covid-19 had on motoring in New Zealand

When the clock struck 11.59pm on March 25, New Zealand’s transport system hit the brakes in...

Kathryn Webster takes a fresh look at a familiar city – as a tourist for a...

Book accommodation for you and your family with AA Traveller