The morning clouds hang low, pastel-smudging the ridge of blue-grey mountains that fringe Greymouth. Rusting train carriages stand with an age-deepening melancholy, as if remembering their vigour when shuttling coal to a bustling port, once the lifeblood of Greymouth.

I am atop the floodwall, the barrier that holds back the Greymouth River during angry times, about to cycle 100km of the South Island West Coast Wilderness Trail. The trail will take me down the coastline, inland to Kumara, past Lake Kaniere, and finish in Hokitika – where, I’m told, the best fish ‘n’ chips in New Zealand await me.

Cycling past quaint fishing boats moored in the Greymouth harbour, I head out along the seaside, where wind-whipped white-edged waves crash in wild abandon, carving up sand in giant scallops and thrusting huge piles of driftwood high up the beach. Here is where I get my first taste of the quintessential West Coast landscape: the omnipotent raw sweep of nature.

At the end of the coastal stretch is the 127-year-old Taramakau Bridge, with a new clipped-on section for cyclists. There’s a tricky stretch of open road on the other side, about 200m, with no cycle path. I get off and walk my bike, padding gingerly along the tiny grass verge.

Heading inland, I encounter a small stretch of dense forest.

On one side of the trail the slender trunks are light, almost luminous, with moss green coverings. On the other they are, curiously, a sooty hue of black, the result, I discover, of sunlight deprivation. Then I notice something else. It’s completely silent. Minutes pass in utter quiet. 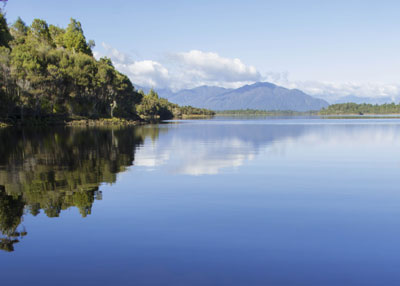 Then a faint call, a distant sound: an ascending warbling, echo fading into silence. A tui. And again, edging into the silence, this time a soothing buzz: a bumble bee.

At the corner of the township of Kumara stands a battered olive- green weatherboard dwelling. It’s a photo gallery, with walls filled with a celebration of the West Coast.

Kumara had its fling with gold in 1876. Today’s gold is in the form of two wheels and I’m told every year sees exponential growth coming from the cycle trail. Several buildings have been restored, including the Theatre Royal Hotel and the BNZ building, now luxury accommodation with tasteful period furnishings, richly patterned wallpaper and a drawing room where one can linger over a single malt whisky.

The following morning I depart as the sun begins its ascent: a quiet, gentle, pristine time of day.

The trail runs between the waters of the Kapitea and Kumara reservoirs, which first provided power to the West Coast in 1928. The water is a startling blue. Beneath are rocks of rust red, which glow golden in the sunlight. The surface ripples with tiny oscillating waves, distorting reflections of clouds, nearby mountains and a scattering of tree stumps standing partially submerged within the reservoir, their roots entombed in a watery grave. Their aspect is haunting, majestic and beautiful.

A curving boardwalk leads through lowlands of bush towards the mountains – a 310m ascent and the most challenging leg of the ride. Before I can embark upon it, I feel the vibration of wheels on boards and, swooping down upon me, is a group of six women. They are out for a day’s cycling, a weekly thing, and someone says, “we live in paradise,” and we joke about fitness, or my lack of it, and everyone is laughing.

Moments later I meet a family of four.

“We are headed along the boardwalk to the reservoir,” announces Dad.

“Can I take your photo?”

“Sure!” he says, laughing. “You’d be surprised how often we’re asked!”

Am I old fashioned? Perhaps, but cycling off, the word that comes to mind is ‘wholesome’. I wish every family in the world could do this.

The trail crosses over fabulous swing bridges with vistas out across the ravine.

I meet 60-year-old Anne. More precisely, Anne passes me at an impressive clip and, out of solidarity,

I suspect, pulls up to say hello. She has come from Greymouth and will finish at Lake Kaniere – a ride close to 80km, making my 39-kilometre leg to Cowboy Paradise seem rather limp.

“I’ve been cycling my whole life,” she says, with joie de vivre, as she heads off up the hill.

My pace slows. Finally, I trudge alongside my bike. Then: relief!

A sudden rapid descent: a thrilling serpentine trail that manoeuvres through slender trees, finally uncoiling, so that

I coast gently, serenely, onto the plateau upon which Cowboy Paradise sits.

The sun is setting over the hills, framing the valley and casting the foreground in silhouette. Fingers of gold break through the twilight in a heart-stopping rush of light. My weariness disappears.

Cowboy Paradise is a place where you might tether your horse instead of your bike. Cabins flank either side of a large building. The central hall is capacious, with a large dining table at one end that runs the width of the room. From the deck is a majestic prospect of the valley below.

Over a roast dinner people swap cycle tales, and, as if the trail has dissolved inhibitions, share life narratives with unusual candour. The sense of connectedness through a shared experience is palpable.

The next morning, I weave my way down a series of switchbacks into the valley. Before I see it, I hear it: the rush of water over stones. The cycle path runs alongside wide flowing water; the river coming from deep in the mountains, like in an early 20th-century New Zealand landscape painting.

I arrive as drizzle sets in. Droplets roll, swell then drip from my helmet. The distant hills surrounding the water are monochromatic shadows.

My departure from the lake is accompanied by a sign warning me not to stray too close to redundant mine shafts. The trail sits adjacent to a timber water race, built in 1875. The water, once used for sifting through grain for gold, is swift and clear. There is something thrilling about riding this trail: this is where much of New Zealand’s colonial history began. It echoes with the aspirations, disappointments, sweat and success of those who pushed their way through indigenous rainforest in search of “better”. It weaves a unique trajectory through landscape, history and the narratives of characters along the way.

The track narrows. On my left a vertiginous drop. Then there are dips and hollows. The bike collects speed, moving with an easy, undulating rhythm through the wooded environment.

I’m up on the pedals, whooping. Therapy for mind and muscle. After an hour’s cycle through outlying suburbs, I reach Hokitika.

I pull up at a small shop on the edge of town. I’ve just done 100km and I deserve it. Steam rises as I rip open a bundle of newsprint. I reach in and retrieve my first, crisp, succulent chip.

The best in New Zealand.

The entire West Coast Wilderness Trail is 132km and designed to be ridden in four days. It’s graded easy with just a short section graded intermediate.

The trail can be enjoyed in either direction between Greymouth and Ross. Accommodation is available in all towns along the way; bike hire and trail transport is based in Greymouth and Hokitika. See NZ Cycle Trail  for details and maps.

While you’re there
Visit Treetops Walk, south of Hokitika, to get high into the rainforest canopy. A platform and tower provide access to another world and a bird’s-eye view of the surrounding bush and distant lakes, mountains and coast.

Lake Kaniere, surrounded by snow-capped mountains, is a popular picnic spot. Take a short walk from there to the Dorothy Falls.

Buy a quality souvenir. Hokitika is packed with art and culture and is home to many artists and craftspeople with open studios and galleries.

A trip to Shantytown, south of Greymouth, is a trip to yesteryear. The heritage park is a re-creation of a gold rush town, complete with a steam train, and is a big hit with history fans.

Take a camera: springtime travellers are in for a treat in Ross, where blossom trees line the main street.

Pick up a New Zealand Cycle Trail Guide from an AA Centre. See AA Traveller  for itinerary ideas and places to stay.